Another area that the Chancellor has hoped will deliver jobs and growth is inward investment, as shown by his cutting of corporation tax and the PM’s recent trip to India.

Cities have been keen to jump on the agenda of inward investment from foreign businesses too. The suitably vague request for the signing of a Memorandum of Understanding’ with UKTI has been almost ubiquitous across City Deal submissions and conversations around them.

It’s no surprise that cities are eager to encourage investment from foreign shores into their cities. But if the Chancellor takes the opportunity to further incentivise international business into Blighty, where are they most likely to want to locate?

Businesses from the USA dominate the total number of foreign firms in our cities. With the exception of Belfast, businesses whose ultimate parent is based in the USA account for the most foreign owned businesses in every city in the UK. Reading in particular is a hotspot for US owned firms – 2.8 percent of its total businesses had an ultimate parent from the USA in 2010. The next most frequent countries represented are near neighbours France, Germany and Holland.

The economies such as China and India are likely to become increasingly important for purchasing our goods and services. But the BRICS countries are conspicuous by their absence. Companies from these countries make up no more than 0.2 per cent of the total business base of the most popular city, Luton. The maps below show the geographies of businesses from the USA, Eurozone and BRICS across UK cities. 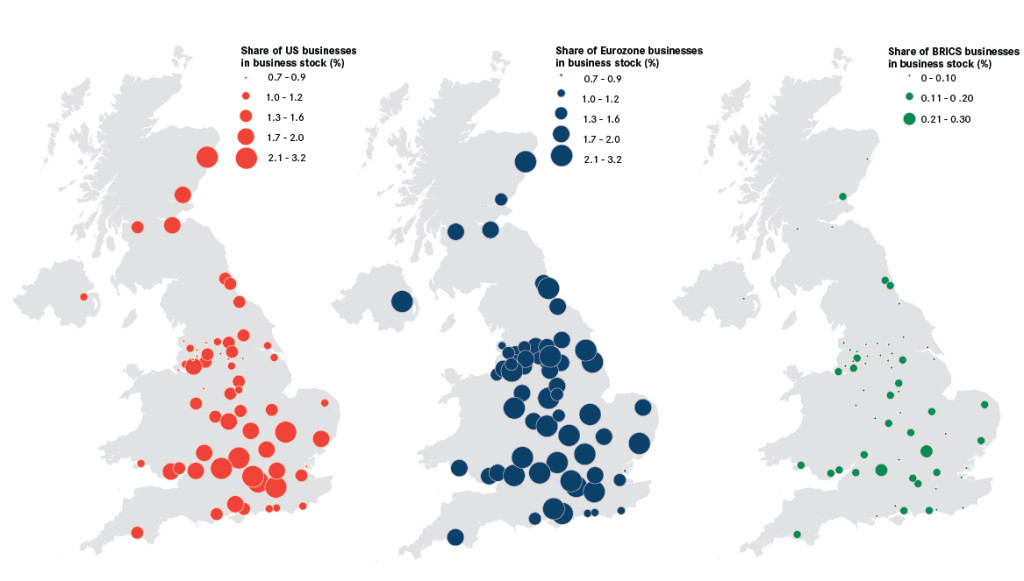 It is likely that any further moves by the Chancellor to attract companies to our shores in this week’s Budget will fall more loudly on the ears of business bosses in our traditional heartlands of Europe and the USA, rather than the fast growers of the developing world. And if history repeats itself, those businesses listening are most likely to choose cities in the Greater South East.