Despite the tendency of many local and national politicians to talk of manufacturing as the future of British jobs and growth, ‘new work’ industries (digital, creative and professional services) are where the majority of jobs will be coming from. As our Small Business Outlook 2015 report shows, there has been significant growth in ‘new work’ SMEs in recent years, and this is set to continue. These small firms are highly productive and create more jobs than in other industries. They also boost demand in other sectors such as administration, retail and leisure. In cities which have more of these firms, wages are higher, productivity is higher, employment is higher and jobs growth is higher and rising.

What does this mean in different cities, often facing very different local economic and employment challenges? 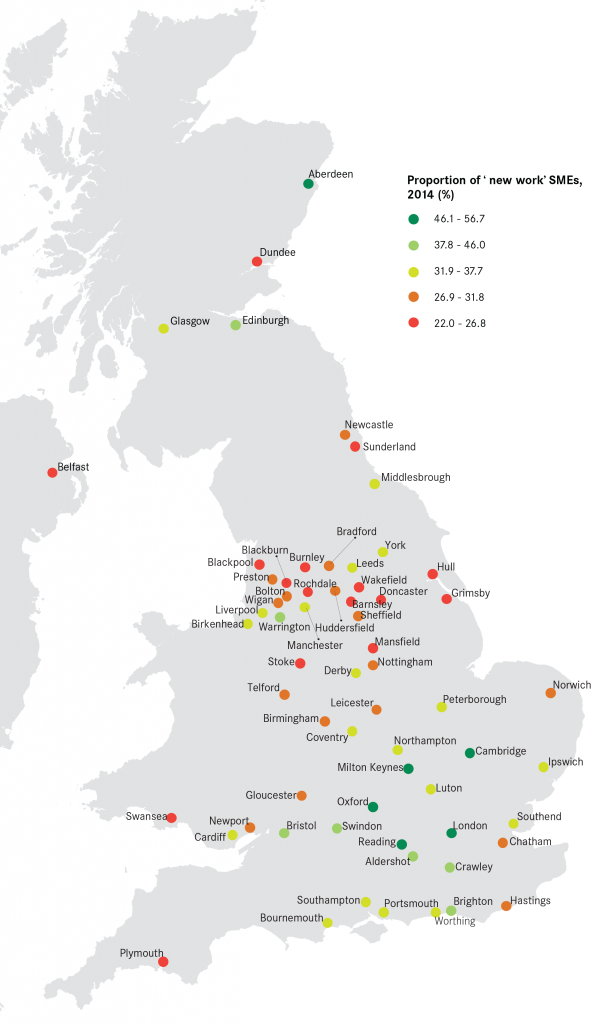 The recent closures at Tata, Caparo and SSI steel works have shown the vulnerability of jobs in large heavy industry employers across the country. In Middlesbrough for example (the PUA in which Redcar lies) SSI recently shut its doors causing a shockwave in the local community. The city faces extremely tough decisions in how best to cultivate new firms and equip local residents with the skills needed to benefit from future job opportunities in the growing small and innovative firms like those in the ‘new work’ sectors.

Supporting the conditions for growth amongst these businesses will foster growth in other sectors and create much more of a multiplier effect than propping up firms that are vulnerable to the same globalization of trade that benefits ‘new work’ industries. Mostly, these firms benefit from the same conditions: being close to each other, effective connectivity and a wide range of skilled workers.

One example of this is Teeside University’s digital innovation centre, an effective model for utilizing university-business linkages and cultivate new jobs. This could, over the long term, help support Middlesbrough’s small community of digital SMEs (62nd lowest concentration of 64 cities) in the city. This is clearly only a small example of the major economic adjustments, together with public and private sector leadership, that will be needed to help foster more jobs in productive and innovative firms. The Tees Valley devolution deal, set to be signed shortly, should better enable city decision-makers to better target skills budgets and business support at the most relevant, city level.

In contrast, London’s digital SMES have been struggling to cope with rent rises and broadband overload in “Silicon Roundabout”. After direct contact and lobbying from London’s tech sector, the Mayor was able to identify and act on the specific local issues of SMEs being priced out of the local cluster. Businesses in London face the highest cost of office space of English cities (£268 per square metre) and the city struggles with the national policy of permitted development rights where office-class buildings can easily be turned into more profitable residential use. However, due to the strategic planning powers and resources the Mayor has, he has been able to consult on how to protect firms from local rent rises and protect the conditions for growth. Clearly, rent rises and broadband capacity issues are symptomatic of the costs of success that cities with clusters of ‘new work’ industries will face – as places become more popular they get more expensive to live and work in. The Mayor plays a crucial role in identifying and combatting these ‘congestion costs’ and mitigating them by providing office space and housing that meets demand. It remains to be seen how successful this latest measure is, however the ability to act is an advantage.

These examples highlight that the responses needed in different places are unlikely to be served by a single set of central policies.

That’s why the priority for cities and their surrounding areas is to use the powers they are currently gaining through the devolution deals and the anticipated localisation of business rates to improve the conditions for ‘new work’ businesses in their cities.