Love it or hate it, you can’t deny that London is a heavyweight city. It plays a disproportionate role in the UK economy: it is home to 15 per cent of people, 23 per cent of businesses and 27 per cent of the country’s economic output. It also performs this role both in the world of work and as a place of leisure.

Our new report ‘What’s in store?’ looks at the differing roles that UK cities play as places of leisure and consumption. At the headline level, we found that a city’s size and its economic strength give it advantages when it comes to the provision of amenities.

A larger city means a larger pool of potential customers for its amenities. This makes it more likely that amenities, even the more niche ones, will survive by spreading their fixed costs across many customers. And a more prosperous city means more spending power and demand for amenities compared to a city of the same size.

As the second strongest city in the UK (in GVA per worker terms) and the largest by a margin (almost four times bigger than the next largest city, Birmingham), London has the lead in this space. Combined, these features play out in five different ways: 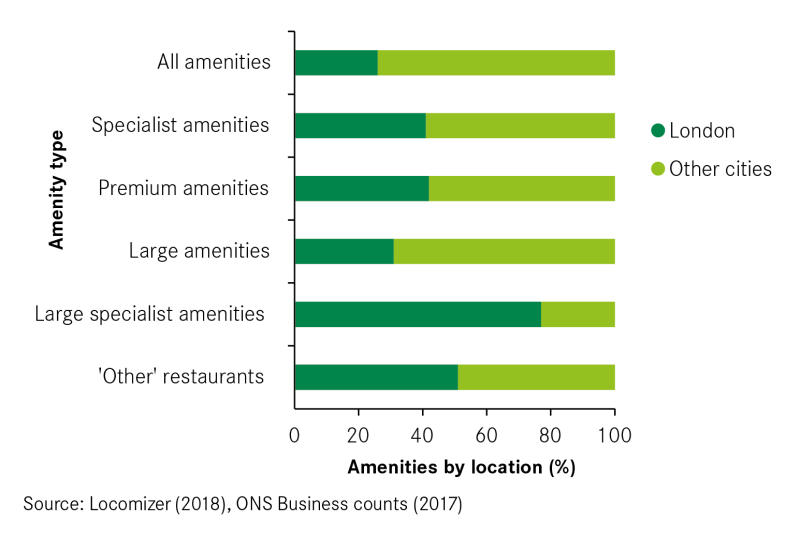 1. London has more amenities than anywhere else

2. It has more specialist amenities than anywhere else

Of these amenities, over 17, 000 are what we would call ‘Specialist’ – those that are used either less frequently or by a smaller segment of the population or both. This includes places like the Royal Albert Hall, Wembley Stadium and the Hammersmith Apollo. Manchester, the next highest, has around 2,500 of these. London accounts for 41 per cent of specialist amenities found in UK cities.

3. It has more premium amenities than anywhere else

4. London has larger amenities than anywhere else

Looking at all amenities, London employs roughly the same number of people per amenity as other cities. However, the country’s larger venues are more likely to be in London than in any other city – almost a third of all large city venues are in London and this rises to 77 per cent for the more specialist ones.

5. It has more variety than anywhere else

Given it has more amenities than other cities and more specialist amenities too, it is no surprise that the capital also caters for a wider variety of interests. Take food for instance – London has the widest variety of restaurants cuisines than any other city in the UK. Almost a third of restaurants in London are outside of the top six most common cuisines (British, Indian, Italian, Chinese, European and Asian). This means that just over half of the country’s restaurants offering less common cuisines like Indonesian, Argentinian and Korean in UK cities are in London.

The strength of the visitor appeal of London, the sheer number of domestic and international tourists it receives every year no doubt supports the demand for these amenities. But the size and the strength of its economy are crucial to its ability to sustain as the range of amenities that it does. We see this relationship with economic strength play out in other UK cities too – stronger cities tend to have more specialist and premium amenities per population than their weaker counterparts.

However good an amenity offer a city has it can neither cause nor be sustained without a strong economy. People still moved out of London between the 1950s, ‘60s and a large part of the ‘70s as industries declined, housing was scarce and pollution was at its worst, even though the museums, the theatres and the restaurants remained.

Cultural and leisure facilities are important – they play a vital role in widening participation in the arts, in developing children’s interpersonal skills and have their own economic benefits. But they follow and support economic growth, not lead it. This is true for all cities, including London, and should be borne in mind as governments at all levels seek to improve local economies and regenerate high streets.