Promoting the use of more sustainable modes of transport has been a target of national transport and planning policy for nearly two decades. The benefits of walking, cycling and public transport over cars are now widely acknowledged – but habits are slow to break, and as the data from our recent report Urban Demographics: Where people live and work shows, we’re only part way there.

Establishing more sustainable transport patterns depends greatly on where in the city people live, and where they work. The chart below, which shows the change in method of travel to work across cities in England and Wales, shows that during the first decade of the 21st century, residents in city centres saw the greatest increase in journeys made on foot, by bicycle and by public transport. In suburbs and hinterlands, however, the most significant component of the total change was journeys made by car or van. 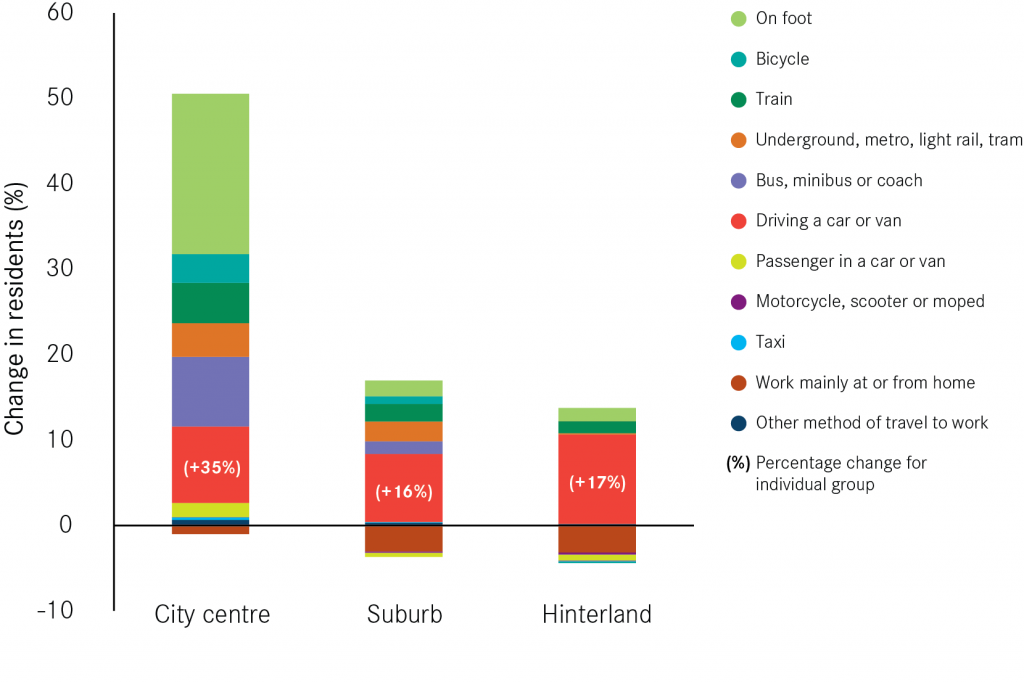 By 2011, as the chart below shows, 32 per cent of all residents in city centres across England and Wales walked to work. This reflects the finding that more than half of all residents travelled less than 5km to work. By contrast, more than half of suburban residents and more than two thirds of residents in rural hinterlands drove to work. This spatial variation in modes of transport used across different parts of cities tells us something significant about the circumstances under which sustainable transport become feasible. And much of it comes down to the geography of our economies. 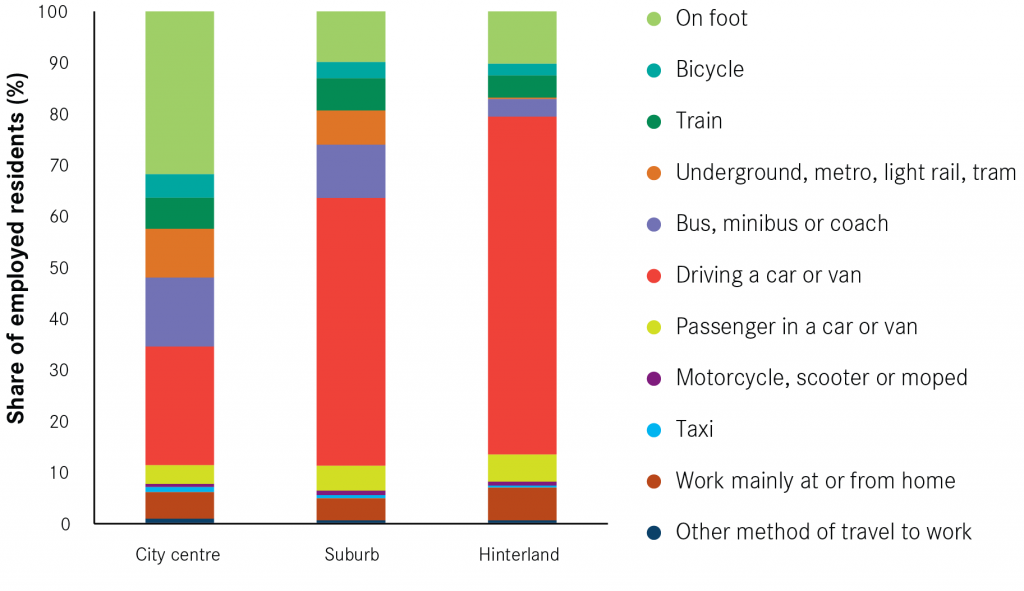 There are two main ways in which this geography has an impact. The first is the proximity of people to their jobs. As the chart below shows, where city centre residents also work in the city centre – a trend that’s driven by the centralisation of the city’s economy – more residents travel to work by public transport, on foot or by bicycle. Large cities really drive this trend, with London, Leeds, Bristol, Liverpool and Manchester leading the way.

But at the other end of the spectrum are cities where city centre residents are less likely to work in the city centre. These tend to be smaller cities – places such as Mansfield, Stoke and Telford, which have more dispersed economies. Residents in their city centres tend to travel elsewhere to work, meaning that their commutes are longer, and are more likely to be made by car than by bicycle or on foot. 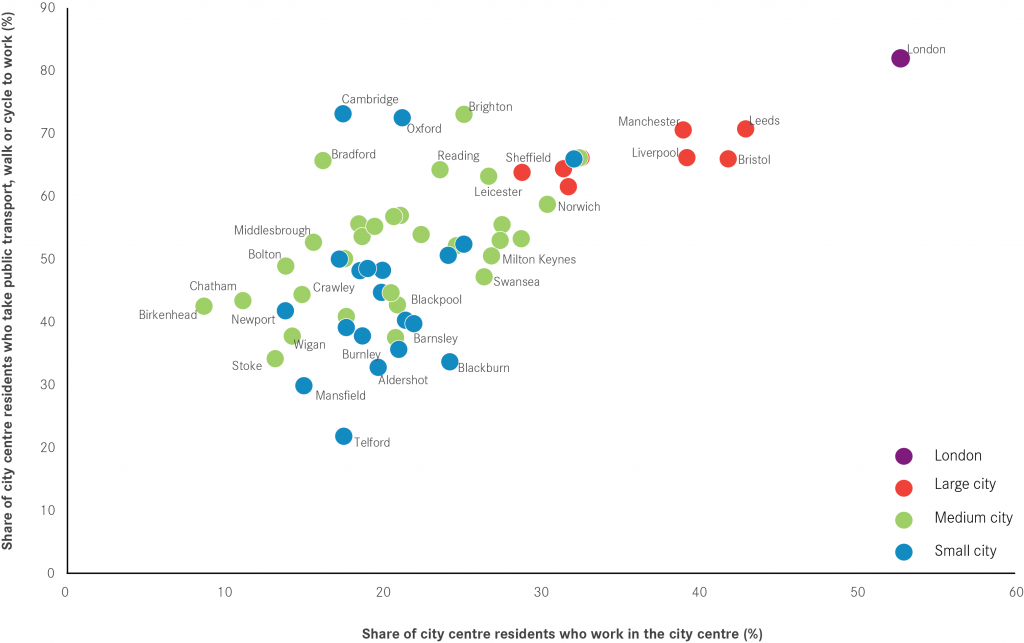 The other key factor is the density of workers in a particular place. For one thing, a new piece of public transport infrastructure – a bus, a tram, or a cycle path – requires a certain critical mass to make it commercially viable, as well as worth the time it takes for an individual to use it, rather than getting in their car. A density of people to support the necessary demand, then, is crucial. For another, the higher the density of a city centre, the more pressure there is on a finite amount of space. And as the GIF below illustrates, cars are notoriously inefficient ways of transporting people, compared to public transport, walking and cycling.

So the higher the density of workers in a city centre, the more likely those workers are to commute using sustainable modes of transport – as the chart below shows. 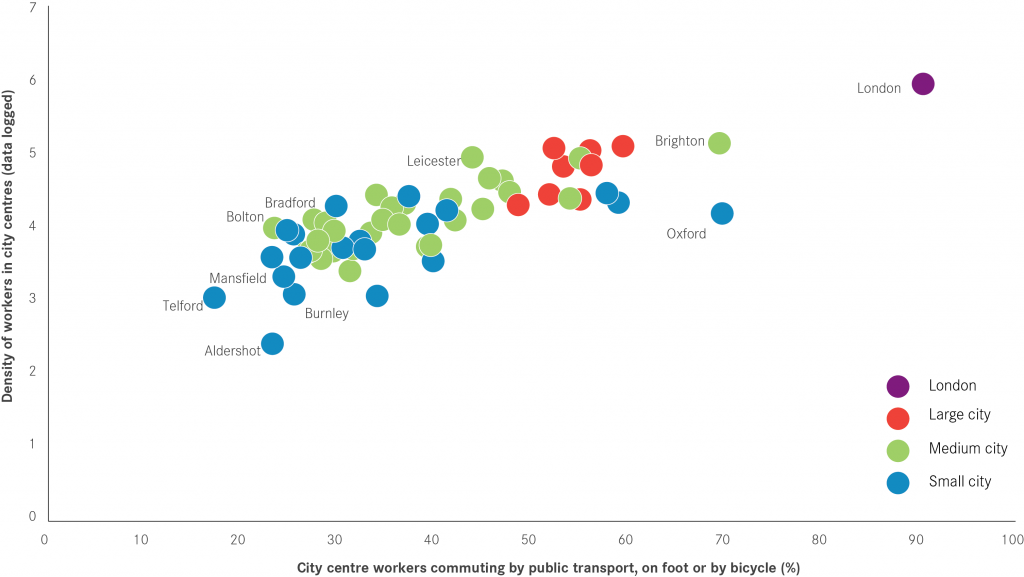 Add in the growing warnings of the detrimental effects that unprecedented levels of urban pollution caused by private transport are having on public health, and the onus is stronger than ever for cities to push for more sustainable alternatives to our travel habits in and around cities.

But doing so will rely  on understanding the role that proximity to jobs and urban density play in transport behaviour in cities. And that means transport planners, providers and policymakers need to be tuned into what happens in economic development, inward investment and business support, in order to cohesively and more sustainably plan how we live, work and move around our cities.