The West Midlands last week won the race with Greater Manchester to publish the first local industrial strategy. No doubt both will become the benchmark for other areas to follow as they produce their own strategies. But if these or other strategies are to be successful, they will need to focus on making their areas more attractive to highly productive businesses.

As with the national strategy, the purpose of the local industrial strategies is to improve the productivity of the economies that they cover. While the prevailing thought is that poor productivity is the result of a ‘long tail’ of unproductive businesses, a point referenced in the West Midlands’ strategy, our previous work has shown how this isn’t the case. And looking at the West Midlands and Greater Manchester specifically shows this to be true for these areas too.

The charts below look at the distribution of businesses according to their productivity for the West Midlands, Greater Manchester and cities in the Greater South East. They show two key things. 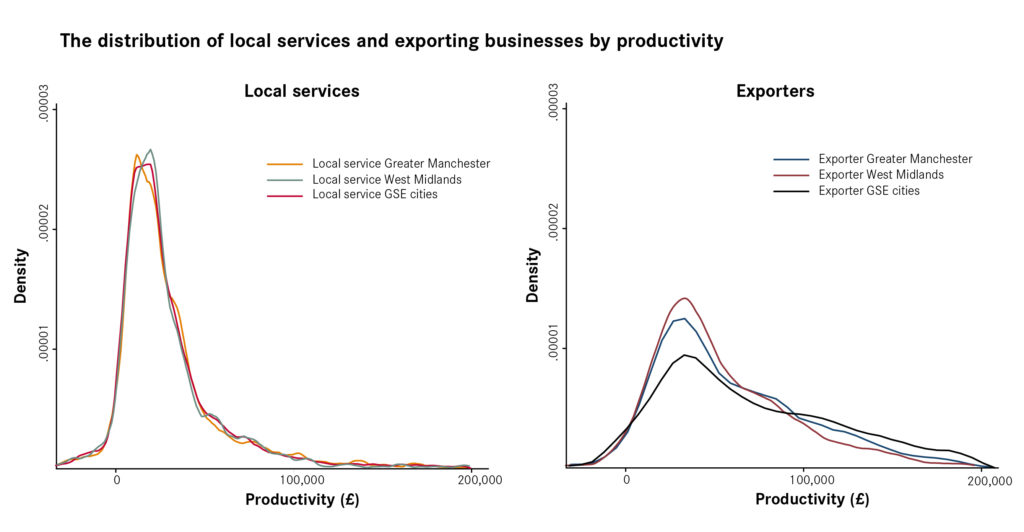 The first is that the ‘long tail’ in all areas is dominated by local services businesses such as cafés, bars and hairdressers. And there is very little difference in the distribution of these businesses, meaning they do not explain the difference in productivity between the areas as a whole.

The second is that the difference between the areas is in the distribution of ‘exporting’ businesses – those that sell beyond their local market – such as advertisers, finance businesses and software developers. While Greater Manchester has a higher share of higher productivity exporters than West Midlands (the distribution is more skewed to the right in the chart), both lag well behind cities in the Greater South East of England.

This difference is not because exporters in the West Midlands and Greater Manchester are performing below par, but because the nature of the activities is different, with highly productive, innovative activities more likely to locate in the Greater South East than elsewhere. So the challenge for both areas is to make themselves more attractive to this type of activity (such as software design), rather than the lower skilled exporting activities (such as back-office functions for a bank or data handling company).

This has been increasingly happening in Manchester in recent years.  Bet365 have opened a city centre office in Manchester to locate its tech team, rather than at its headquarters in Stoke. Siemens engineers its wind turbines in the city that are then built in Hull. And JLR is to open a software, IT and engineering centre there too.

But the chart above and overall productivity figures for the city region show that even with these moves there is still a considerable gap. And so the challenge for the local industrial strategies will be to identify the specific barriers that prevent more investment from these types of exporting activities.

This holds true for many other places too, especially in the north of England. They will no doubt take great interest in the local industrial strategies of West Midlands and Greater Manchester, and take inspiration from them. But if they want their own strategies to be useful, they must be clear in how the actions that they propose – be it investment in skills, transport or commercial space, for example – will help them be more attractive to higher productivity exporters in the future than they have in the past.

This work contains statistical data from ONS which is Crown Copyright.

Productivity
Future of cities Levelling up Productivity
Investment Zones: Will they work?