Foreign firms are more productive than comparable UK businesses. Given this, foreign direct investment is likely to play an important role if the levelling up agenda is to bring greater prosperity outside of the Greater South East.

This investment has long been skewed towards London in particular. The Greater London area accounts for close to 50 per cent of all existing foreign direct investment (FDI) into Britain despite accounting for 17 per cent of jobs (see Figure 1). And almost 90 per cent of this is in Inner London. 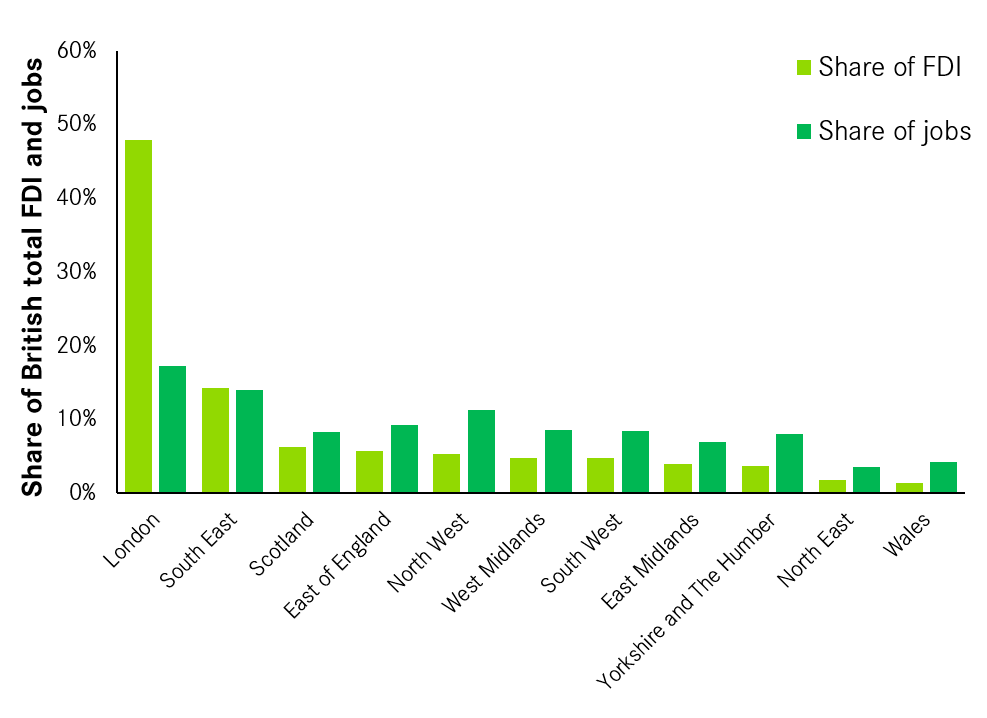 Note: The London figure may be inflated by a headquarters effect, where the investment is assigned to the head office rather than the branch. It seems unlikely though that this would fully explain the difference in geography.

The make up of investment also looks different in London compared to other regions. At the national level, it is businesses in financial activities that make up the largest share of all ongoing investment, accounting for 30 per cent of the UK total. And of this, almost 60 per cent is assigned in London.

Figure 2: Manufacturing dominates FDI in Wales, while finance is the largest share of London’s FDI
Share of FDI by broad sector, 2019 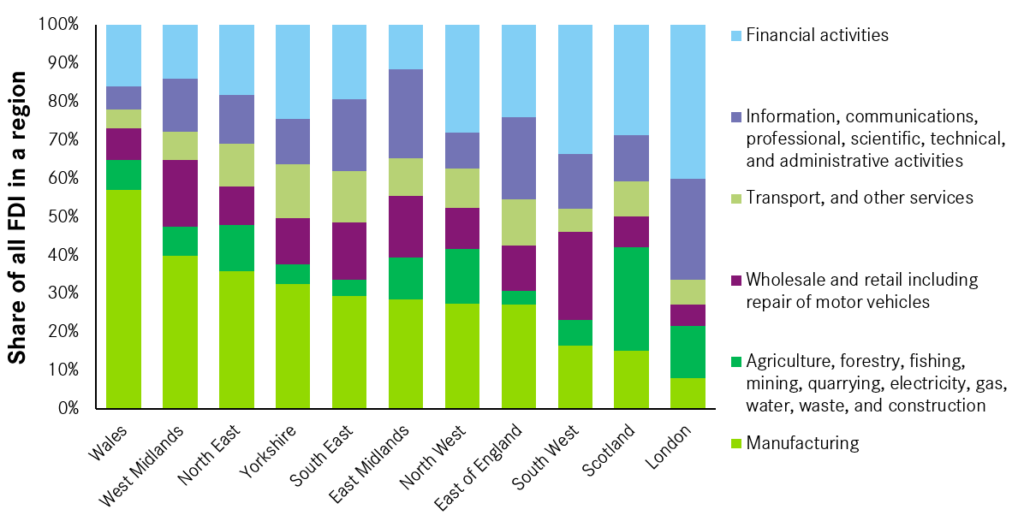 While FDI data doesn’t exist beyond big city regions, the number of employees in foreign-owned businesses acts as a proxy at the city level. When looking at jobs in foreign-owned companies as a share of all private-sector jobs, there are some places outside the Greater South East that stand out. In Sunderland and Aberdeen, almost one in four private-sector jobs are in a foreign company. And in Warrington, it is one in five, higher than London.

Where there is a clearer geographic divide is in the activities of these jobs. Figure 4 shows that the FDI attracted into cities and large towns outside the Greater South East has tended to be in lower-skilled activities compared to within the Greater South East. In Sunderland for example, despite having a large share of overall private-sector jobs in foreign companies, of the jobs that are in ‘exporter’ industries (the ones that drive productivity growth, as opposed to jobs in a high street shop owned by a foreign company for example) 14 per cent of these jobs are in high-skilled activities. This compares to 93 per cent in Reading.

In the past, this data has either been used as a sign of bias within policy or a call to subsidise investment further north. But these arguments don’t engage with the reasons driving these patterns.

Looking at the relationship between the make up of jobs in domestic and foreign-owned companies that are likely to be exporters shows that the location decisions follow similar patterns. You see this even within businesses. Amazon has its headquarters in London and other offices in Bristol, Cambridge, Manchester and Edinburgh. But its distribution centres are located elsewhere. And Nissan assembles its cars in Sunderland but does its design and engineering in London and Oxfordshire respectively.

Figure 4: The investment decisions of foreign companies follow those of domestic ones
High-skilled jobs in domestic and foreign ‘exporter’ businesses as a share of their totals, 2019 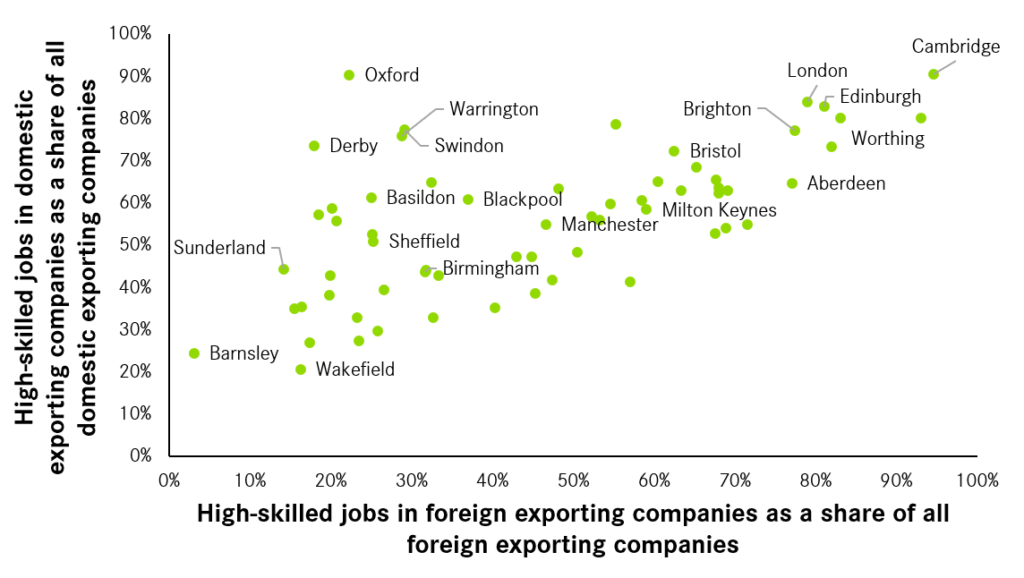 The location decisions are driven by the offer that different parts of the country offer to businesses. High-skilled businesses require access to high-skilled workers, and for services businesses in particular, access to other high-skilled businesses. And their location decisions suggest they are willing to pay a premium to access them given the higher commercial rents in the places they locate in. Lower-skilled businesses require access to lower-skilled workers and cheaper land, given the lower margins on the output they are producing. Crucially this means that lower costs are not a defining factor in attracting high-skilled investment. And so as part of its levelling up strategy, the Government should not offer subsidies on foreign investment, as has been suggested in some quarters.

Instead, to encourage investment, either domestic or international, the levelling up white paper needs to address the fundamentals that limit it. This makes skills policy very important. In our levelling up work, Centre for Cities recommends increasing money spent on skills to 7 per cent of GDP, in line with Sweden, and using this money to increase spending on schools and further education. And to encourage more private sector investment, give tax breaks for skills investment in the way R&D tax credits are used to encourage investment in innovation.

Foreign direct investment will be important for improving the economic performance of struggling parts of the country, and improvements in it will be a sign that levelling up is working. Better measuring this, not only in terms of quantity but in terms of types of activity, should be the job of any new institution that may be created to track measuring up. But the ability of policy to change these patterns directly is limited. Instead, if there is to be an increase in investment policy must focus on the fundamental reasons why it doesn’t happen currently, focusing on skills in particular.

This work was produced using statistical data from ONS. This does not imply the endorsement of the ONS in relation to the interpretation or analysis of the statistical data. This work uses research datasets that may not exactly reproduce National Statistics aggregates.