The unprecedented nature of the pandemic required an immediate policy response from the government on an extraordinary scale, including numerous economic stimuli and household, employment and business support measures from March 2020.

This initial policy ‘toolkit’ evolved over the next two years in order to cushion the shocks brought on by the shutting down of various sectors due to lockdowns and the consequences of social distancing. The total cost of the government’s Covid-19 policy response is estimated to be between £315bn and £410bn, or between £4,700 and £6,100 per person in the UK, demonstrating the magnitude of the crisis.

Two years on, and with most of the UK’s cities and largest towns close to returning to their pre-pandemic levels of footfall and spend activity, it is worth reflecting upon some of the most notable policy measures. The government’s responses proved successful in tackling the large degree of uncertainty and both the supply and demand shocks to the economy, and although continuing with these measures collectively would be fiscally unsustainable, government should consider their originality, speed and scale and apply this thinking to other prevalent domestic issues.

Looking over a longer time horizon, measures to combat structural issues had varied levels of success. Deeper systems reform, coupled with political will, will be needed to improve the long-term delivery of key policy commitments such as levelling up and net zero.

The furlough scheme tackled the shock to labour demand. The focus should now turn to fixing labour supply issues in cities across the UK

The largest household support measure was the £70bn Job Retention Scheme, also known as furlough, introduced in March 2020 to deal with the demand shock for workers as businesses closed. It was a wage subsidy for workers to receive 80 per cent of their wages up to £2,500 a month, with employers given the choice to top up to 100 per cent of wages. A total of 11.7 million jobs were furloughed throughout the scheme until its winddown in September 2021; in the second part of this blog series, we will publish a more in-depth assessment on the impact of furlough.

The data suggests that the bulk of furloughed employees remained in the labour market throughout the pandemic, whilst JRS claims were highest in the cities and towns which saw the largest increases in claimant counts, indicating that furlough prevented a large rise in unemployment in the most strongly affected places.

Now that the furlough scheme has ended, the government should think creatively about how to tackle the labour supply shock, i.e. the chronic labour shortages impacting the recovery. The latest ONS data shows there are now more than 1.3 million job vacancies across the UK (Figure 1), a record level, which are concentrated in specific industries such as health and social care and food services. This will affect places differently, depending on the share of the labour market these jobs account for; areas in the Midlands and North with weaker, lower-skilled and local services-focused economies have seen the greatest damage and will likely continue to suffer the most. To deal with this in the shorter term, wages will have to rise, whilst over the longer term, the focus should be on devising place-specific retraining schemes, in particular for those with no qualifications. 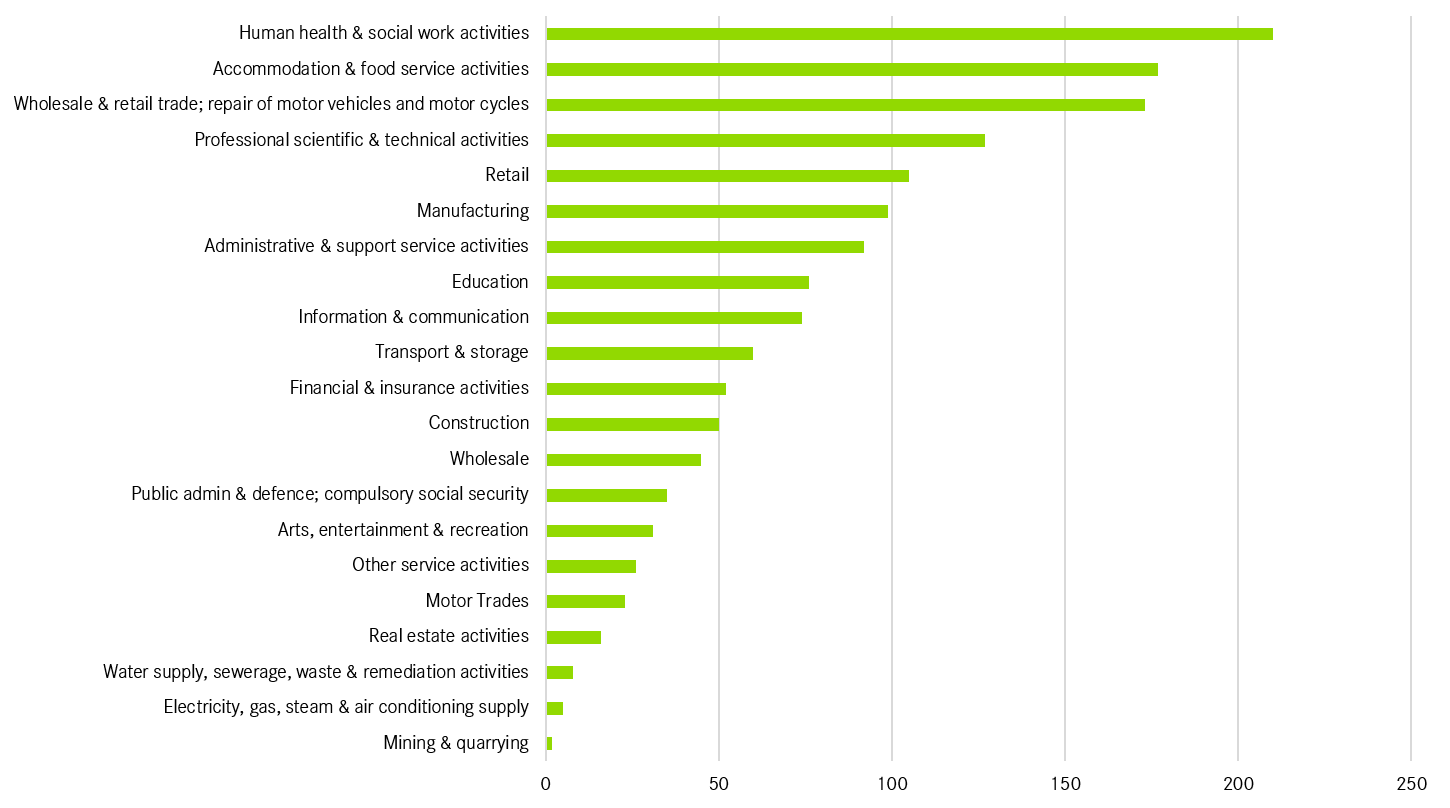 Deeper issues were more difficult to tackle, such as Kickstart’s underwhelming response to youth unemployment

Policymakers also prepared a separate response to target youth employment, as the £1.9bn Kickstart Scheme was introduced in Autumn 2020 by the Department for Work and Pensions to support those aged between 16 and 24 on Universal Credit. The scheme funded employers to provide 250,000 six-month work placements in jobs which otherwise would not have existed, covering 100 per cent of the National Minimum Wage for 25 hours a week. This type of subsidised employment, i.e. creating and funding employment directly, has been shown to alleviate the ‘scarring’ effect of long-term employment for young people.

While the speed with which Kickstart was introduced was admirable, the Commons’ Public Accounts Committee recently reported the underspend of the budget with only 168,000 youth supported, pointing to several shortcomings which diluted the scheme’s effectiveness (ranging from a lack of granular data collection on its progress to little guidance for employers on what to provide to Kickstart participants).

With the youth claimant count still above pre-Covid levels, an enhanced successor scheme considering this feedback should be built upon in case of a future recession. In the long term, the focus should be on skills investment through retraining according to a place’s needs, the removal of barriers to further education by providing flexible access to courses and better coordinating them with what places actually need. Ultimately, local authorities are best placed to understand local demand for skills.

The Future Fund was an excellent example of business support in principle, but looking ahead, policymakers should consider how these schemes develop and are managed in practice

On business support, the £1.1bn Future Fund was introduced in May 2020 in partnership with the British Business Bank, as part of a toolkit supporting the UK’s firms driving innovation and productivity growth. This involved an offer of up to £5m in convertible loans for UK-based start-ups unable to access government-backed loan schemes, with private investors at least matching the government’s commitment, and the government converting the loans into shares when the companies would look to raise new investment. These companies tend to be lossmaking as they look to grow and are reliant on equity investment, which dried up at the beginning of the pandemic. There are 265 companies being supported by the Fund.

This case study of providing liquidity for early stage enterprises looking for support during an economic downturn is a great example of creative policymaking in principle. However, reports since the scheme’s launch have noted that football clubs and private luxury villa companies are now part of the scheme, but these are not drivers of innovative activity. Measures which support innovation in the UK should focus on those “exporting” businesses which employ high-skilled workers, sell their products and services abroad, and are the drivers of local productivity growth (and therefore levelling up). Going forward, there needs to be a balance between eligibility criteria which is rigorously applied but does not hamper the speed with which these schemes are launched in times of crisis.

The crisis also showed that both central and local government can work together to act quickly, imaginatively and at scale

In 2020 the government introduced temporary provisions on pavement licences for councils, including lower fees and much shorter consultation periods, to allow restaurants and bars to temporarily take up space rent-free on pavements outside, allowing them to increase their floorspace and serve more customers. Not only did this pedestrianise large swathes of city centres, it also encouraged the public to support the hospitality industry. This pattern of changes in the use of space was also seen in commercial property; the new ‘E’ commercial use class, merging retail, office, restaurants and other city centre uses into a single category was only finally confirmed by the courts in December 2021 after a judicial review.

However, councils have begun to roll back on some of these initiatives, and their future remains uncertain ahead of the government response to the consultation on the time-limited permitted development rights that made street dining possible. Government should embrace these new freedoms for businesses, and task local authorities with delivery and developing best practice to work for all city centre visitors.

Buses were supported by Whitehall during the pandemic, but prosperous bus networks across cities depend on devolution

One of the areas where some creative policy thinking is urgently needed is for buses – in particular regarding their governance and funding. The government recently agreed to extend the Bus Recovery Grant funding, introduced as a direct result of the huge fall in bus ridership levels due to the pandemic, to October 2022, providing the “final tranche” of £150 million for affected services across the country, in addition to the over £250 million in emergency funding throughout the pandemic.

This is intended to cover costs where fares cannot but, coupled with cuts to central government funding as part of the national bus strategy, this is simply not enough. Government must continue to support the country’s bus networks until ridership at least recovers to pre-Covid levels, whilst encouraging metro mayors to fully franchise their local bus networks and deliver real change for the industry.

The short-term policy response has worked, but the focus should now shift to longer-term institutional reforms

The last two years have shown what is possible in terms of policy levers to deal with extraordinary crises impacting the economy, as the responses from government throughout Covid worked well to alleviate the impact of the pandemic across all sectors. Policymaking has now returned to its ‘normal’ playbook, but tackling chronic labour shortages, the impending cost of living crisis and the risk of a recession requires both creative policy thinking and political will. Similarly, whilst net zero and levelling up are long-term policy commitments and therefore different in nature to the Covid response, they require the same scale of response and political commitment as the Covid support measures.

Going forward, the government should use its Covid policy toolkit as a blueprint, whilst considering the importance of evaluating schemes and reflecting upon lessons learned when designing new policy measures. Ultimately, better urban policy will depend on institutional reform over the longer term, at the core of which will be devolving real powers to local government and creating accountable, capable institutions led by directly-elected local leaders. Without this change, government risks stunting its own ambitions to truly “level up” the country.

Coronavirus Future of cities High Streets
How have two years of Covid-19 shaped the high street?

The second in a series of blogs marking two years on from Covid-19, focusing on what the pandemic has meant for the high streets of our largest city and town centres.

Nowhere is feeling the economic and social impact of Covid-19 more than UK’s cities and largest towns. From a public health perspective, Coronavirus has touched every part of the UK, but its economic impact will be bigger in some places than others.

Coronavirus Future of cities High Streets
Covid – Two Years On: How has the pandemic changed the way we live, work and play in our cities?

At this event we discussed how two years of Covid-19 have changed the way we live, work and play in the UK’s largest towns and cities

As a result of Covid-19, urban life has dramatically changed. What does the future hold for cities and the people living and working in them?