As part of a research programme looking at the flows of students and graduates around the UK, we’ve published a new analysis looking specifically at Glasgow and what impact these movements have on the city. This blog sets out the top findings.

A third of Glasgow’s university students are from the city

Given that Scottish students don’t have to pay fees if they study in Scotland, it’ll come as no surprise that higher education is relatively insular, but the scale of separation is perhaps unexpected. Three-quarters of Glasgow’s 72,950 university students were Scottish in 2014/15 and a third were originally from the city. The city also had a significant population of international students – accounting for one in five of those at the university.

In contrast, flows south of the border were very weak. Only 7 per cent of the city’s students were from England, Wales or Northern Ireland. This pattern is similar to other Scottish cities, which attracted in many more students from outside the UK than from England, Wales and Northern Ireland combined. In Edinburgh, for example, a quarter of students were international in 2014/15 while only 16 per cent were from the rest of the UK.

The composition of Glasgow’s university students, 2014/15 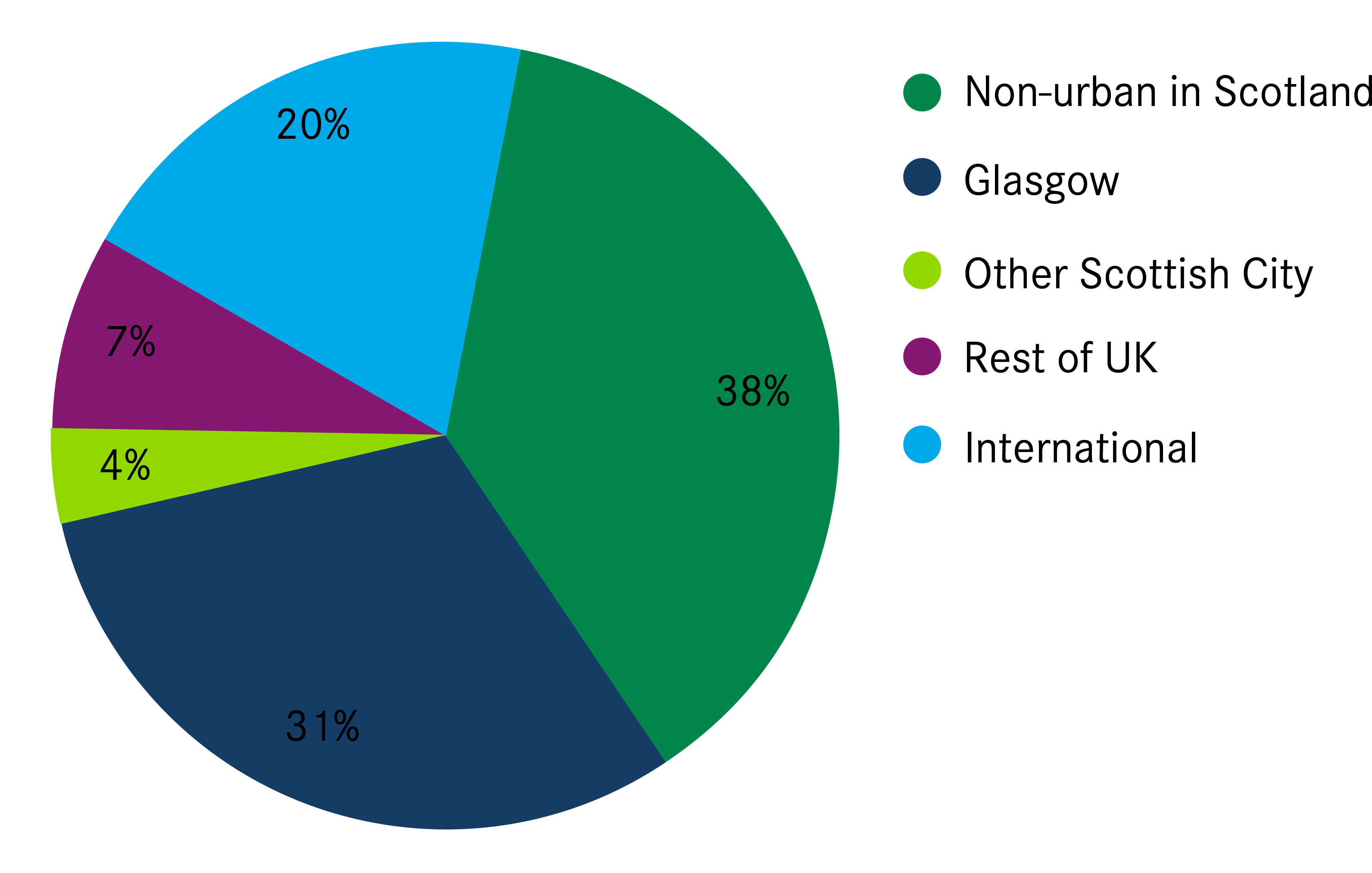 Students from Glasgow who left to study elsewhere were extremely likely to choose a Scottish university, with only 15 per cent moving to another part of the UK. Edinburgh was the most popular city destination, attracting 37 per cent of those leaving Glasgow for university, followed by Aberdeen which attracted 10 per cent of movers.

Glasgow’s graduates also show a tendency to stay within Scotland. The city had one of the highest retention rates of all UK cities:  46 per cent of those graduating in 2013/14 or 2014/15 stayed for work. The second most popular city destination was Edinburgh, the chosen place of work for 11 per cent of those leaving Glasgow. Few movers chose a city elsewhere in the UK, with the exception of London which attracted 8 per cent of those moving away from Glasgow.

The city’s retention success is to be expected given its many Glaswegian students: across all UK cities, we find that those with the highest share of local students had the highest retention rates. It seems that growing up in a city makes you more likely to choose to live there once you graduate.

Second, the university most successfully retaining graduates was the Glasgow School of Art, with 59 per cent staying in the city for work. Given that it has the highest share of international students and the lowest share of students from Scotland, its high retention rate is the exception to the rule, suggesting Glasgow’s job opportunities are a strong draw to graduates of the creative arts.

The result of high levels of retention is that graduates who studied in Glasgow comprise a significant proportion of new graduates. Of the 2013/14 – 2014/15 cohort, 67 per cent either grew up in Glasgow and stayed for university or moved into the city to study for the first time. This is the third highest proportion of all UK cities, behind only Aberdeen and Dundee.

While popular opinion considers this is a mark of success, it is the attraction of new graduates that matters, not where they studied. Many cities have retention strategies in place and want to emulate Glasgow, but it’s not necessary to retain graduates if you can attract them in from other cities. Take Cambridge for example, where only 39 per cent of new graduates studied in the city and 52 per cent were attracted into the city for the first time for work.

Overall, Glasgow is benefiting from the movements of students and graduates in and out of the city, gaining many more graduates than it loses to other cities. The city educates a third of Scotland’s university students and houses 39 per cent of its new graduate cohort. The result is a high-skilled workforce where 47 per cent has higher education qualifications, the 13th highest skill levels of all UK cities. To continue to attract these graduates, the city should prioritise the expansion of high-skilled job opportunities as evidence shows graduates value a wide range of jobs with career progression when choosing where to work.