One of the many recommendations Centre for Cities makes in our latest briefing: So you want to level up?, is the creation of a £5 billion City Centre Productivity Fund. But why is it needed, and how should it work?

Why is the City Centre Productivity Fund needed?

City centres should be the most productive parts of the UK economy. This is because the inherent benefits that city centres offer as a business location – access to workers and access to knowledge, are the two things that high productivity businesses look for, despite the costs of doing so.

What does agglomeration mean in British cities? 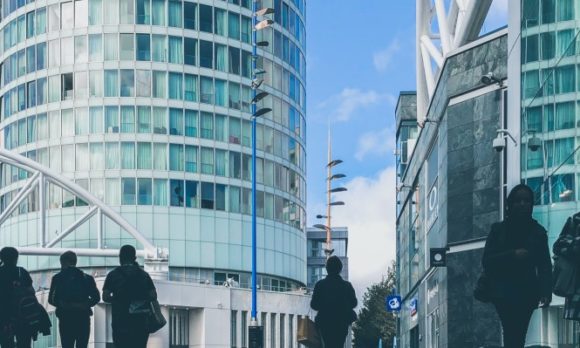 But it is not the case in the majority of city centres in the UK, while Manchester and Birmingham city centres, despite their growth in the last 20 years, are still smaller than they should be. This is bad for the job opportunities and wages of people living in and around these cities and bad for the national economy too.

Given this, the Government should view city centres as an asset class, in the same way that roads and rail are treated. And it should invest in city centres by creating the City Centre Productivity Fund (CCPF) to improve national productivity and help the high street.

How would it work?

The existing National Productivity Infrastructure Fund was created to deal with the UK’s productivity struggles. £5 billion of this fund should be used to create the CCPF.

To access the money local authorities would need to put together an application for funding which demonstrates how their interventions will improve their city centres as a place to do business. It should put forward a strategy for what they intend to do over a multiyear period. Ideally this would be presented in a number of phases: initially the CCPF should be used to fund phase one, but the outlining of future phases would show Government the context that the investment would be made within to show how it fits within a wider strategy.

The nature of the interventions will vary from place to place, but are likely to be some combination of the demolition or conversion of dated commercial space, the creation of new office space, public realm and public transport improvements. Most importantly, all of these interventions should be integrated, rather than a series of freestanding interventions that don’t pull together as a single strategy.

The Government would then allocate the money based on the strength of the applications and how it would help meet its levelling-up agenda.

Infrastructure investments always get a lot of attention. Given the importance of city centres, which cover just 0.1 per cent of land in Britain, but 14 per cent of all jobs, investment in this part of the economy should be seen as at least as important as investments in new road or rail links.