While Thatcherism marked a break from the past policies of supporting jobs in mining and manufacturing, current policies of the Coalition echo regional policy of earlier eras. The Chancellor has spoken of ‘the march of the makers’, while both the Prime Minister and the Deputy Prime Minister claimed upon taking office that they will rebalance the economy back towards the North and back towards manufacturing. In spirit this is a return to the policies of the middle of the last century.

How plausible are these aims? And what is the future of manufacturing in this country? To answer these questions, we need to look in more detail at two themes dominate discussion around the future of the sector. The first is ‘reshoring’ and the second is ‘advanced manufacturing’.

Let’s take reshoring – the repatriation of jobs that had previously been moved abroad – first. It has received a fair amount of attention in recent months – EY claim that reshoring could add an additional £15.3 billion to the national economy, as well as 315,000 extra jobs, while David Cameron made returning jobs the topic of his speech to the last year’s World Economic Forum in Davos.

The extent to which reshoring has actually happened to date is unclear. Where it has happened – such as Symington’s moving Chinese noodle manufacture from China to Leeds or MX moving shower base making from China to Tewkesbury – has clearly been good news for those that have got a job as a result.

But there are two main problems here. Firstly, the long term sustainability of these jobs is questionable.  These (lower-skilled) jobs were moved offshore because they could be done more cheaply elsewhere. While the economics might have changed for some firms (with stress on the ‘some’) to bring them back to the UK, they could very easily leave again. A competition on cost is not something the UK is going to win.

Secondly, questions should also be asked about policymakers actively attempting to encourage reshoring. As we showed in A Century of Cities, those cities that struggle on a range of economic measures are those that have replicated their economic structure – replacing low-skilled jobs in one industry with low-skilled jobs in another. Reshoring is the purest form of replication – it replaces low-skilled, routinised jobs with the very same low-skilled, routinised jobs.

Rather than enriching discussions about economic development, the reshoring argument is likely to act as a distraction. The activities of the North East LEP is a case in point. The strapline of the LEP’s Strategic Economic Plan is to create ‘more and better jobs’. No arguments here. Somewhat contrary to this aim, at last October’s MIPIM UK event the LEP held an event to discuss the potential benefits of reshoring. Given the low-skilled, routinised nature of reshored jobs, this is at odds with the LEP’s overall strategic goal.

Places have been egged on by central government to focus on this area. Cities with a manufacturing heritage have been encouraged to ‘build on their strengths’ in their City Deals with central government by supporting the expansion of manufacturing. And 73 per cent of the money allocated to the North East region in the first three rounds of the Regional Growth Fund was given directly to manufacturing. Sadly such policies are likely to reinforce the replication of the economies of cities rather than encourage their reinvention.

In A Century of Cities we split cities into four groups depending on how well they have been able to move from a low knowledge economy to a high knowledge economy. Cities in groups A and B have replicated their economies, replacing low skilled jobs in coal mines for those in call centres. Cities in Groups C and D have done the opposite, replacing jobs in more traditional, declining industries with jobs in more knowledge based areas.

Using these definitions, we found that advanced manufacturing tends to locate in those cities that have a high stock of knowledge. As the chart below shows, one in five jobs in manufacturing in group A cities are classed as high-skilled, whereas it’s one in three in group D cities. High skilled jobs require high skilled workers, be that in services or manufacturing. 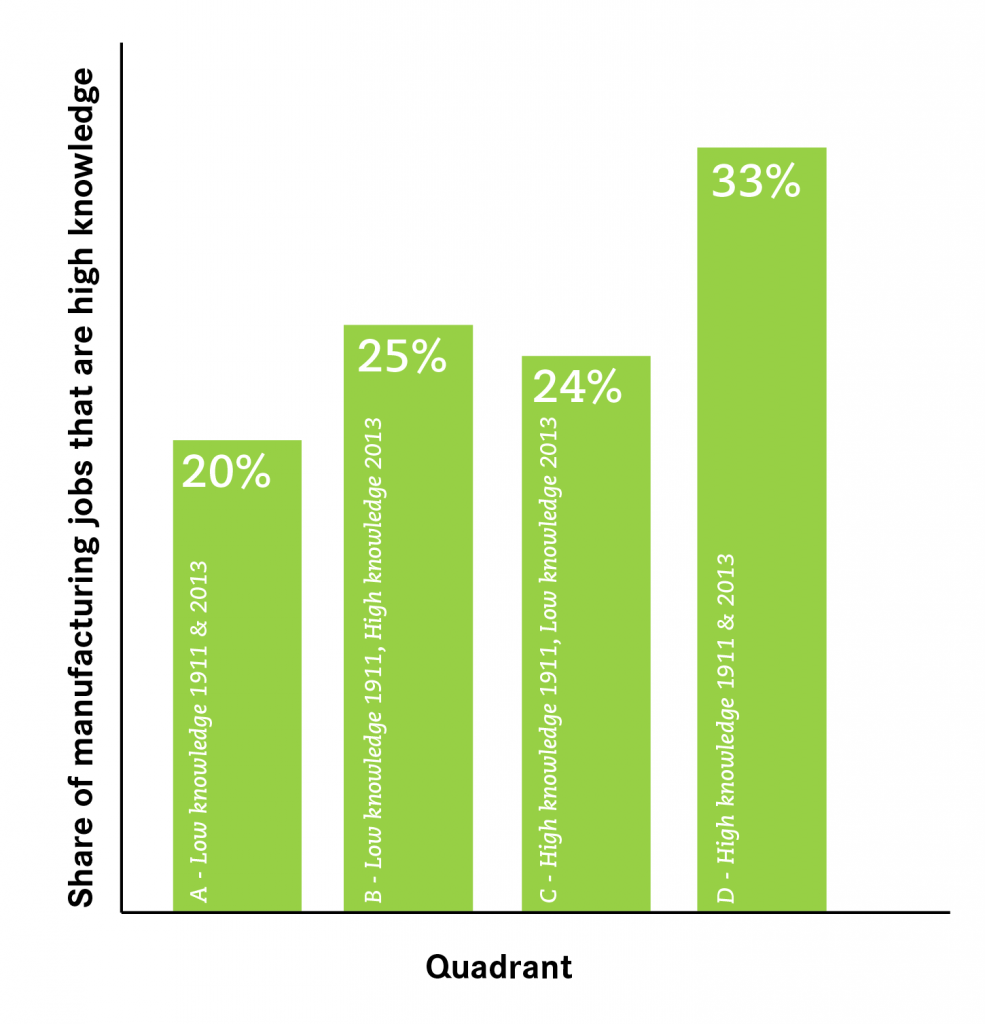 Manufacturing will remain important. But the near half century of decline in jobs, coupled with ongoing globalisation, suggests that manufacturing (in terms of jobs) will play an ever smaller role in the national economy. This role will be ever more hi-tech, and it is likely to be concentrated in certain places. In the same way that knowledge services relies on access skilled workers, so too does advanced manufacturing.

Cities should not spend their precious resources on trying to protect a specific industry, but should instead focus on how they can improve levels of knowledge in their economy for the benefit of all sectors. Ultimately this will determine how successful they are at attracting high skilled jobs, in manufacturing or otherwise, in the future.

The geography of knowledge has determined the performance of cities today. The issue of manufacturing is an understandably emotive one which is bound up in the history and identity of a number of places. And this has had a big influence on policy. But if we want to improve the economic fortunes of our cities, policy needs to stop looking to the past and instead influence the geography of knowledge of tomorrow.

This transition is not an easy one to make. But there is one city in particular that has emphatically made the transition, with lessons for other cities. And we’ll look at this place in part 3.

Previous blog in the series: After the golden age: 100 years of change in manufacturing

Next blog in the series: London – the great adaptor