Perhaps for you, as for me, the mention of an “apprentice” brings to mind Alan Sugar, Joseph Valente’s moustache and a £5 pop-up skeleton. I couldn’t blame you if that’s the case. But behind these obvious distractions, larger forces are at play in the apprenticeship system.

Apprenticeships in the UK are going through a period of substantial change. The long-standing prioritisation of apprenticeships within national skills policy has been reinforced by the government’s target of creating 3 million new apprenticeships by 2020. This, and other changes such as the introduction of the business funded apprenticeship levy by April next year, will have a considerable effect on apprenticeships at the national level.

As with so many national policies, the impact of these changes will be different in different places. Actually, the majority of apprentices in England and Wales – 56 per cent – live in cities, and as our new briefing paper sets out, there’s also a considerable difference between different places when it comes to the number of apprenticeships, sector subjects, levels and success rates. Let’s start with the fact that:

There is a north-south divide in apprenticeships 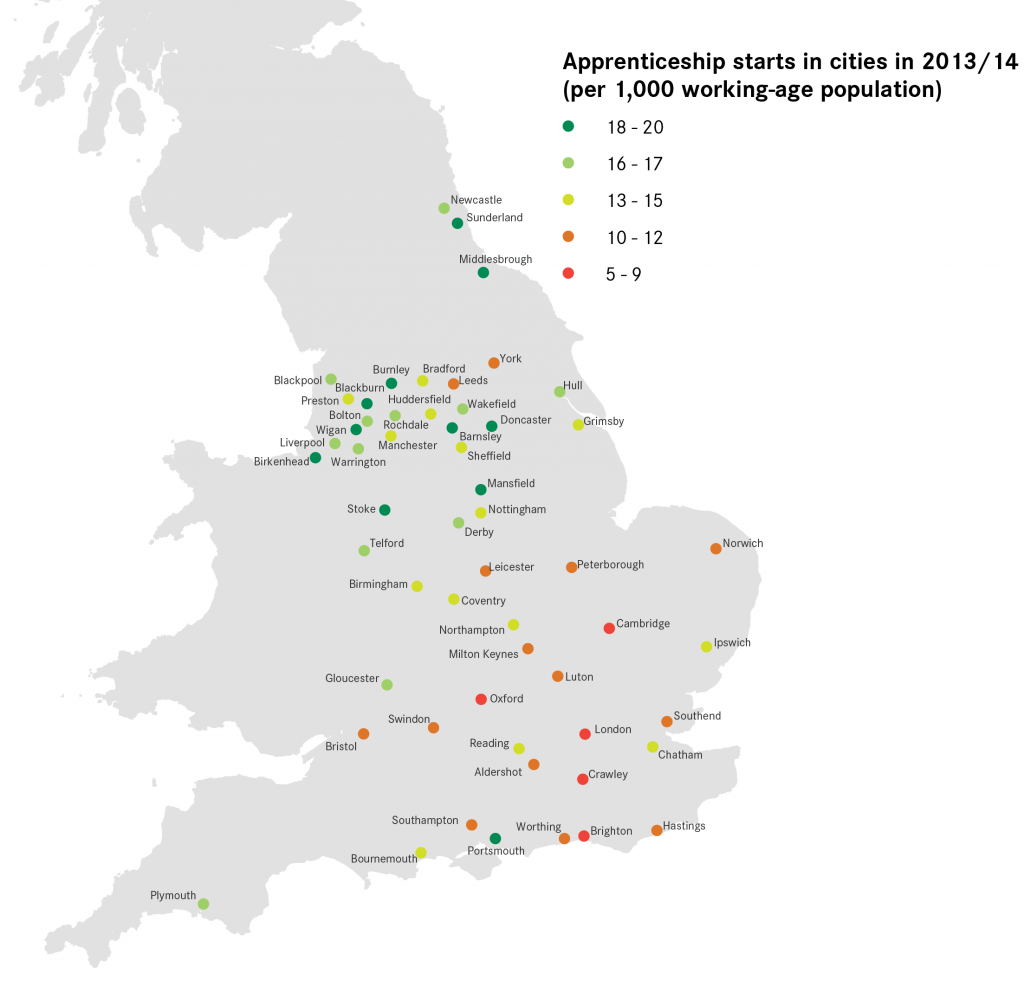 The UK’s northern cities were the traditional heartlands of UK manufacturing, which is often anecdotally connected with apprenticeships. Correspondingly, there is a connection between a city’s reliance on traditional industries in 1911 and its likelihood to have a high number of apprenticeship starts today. 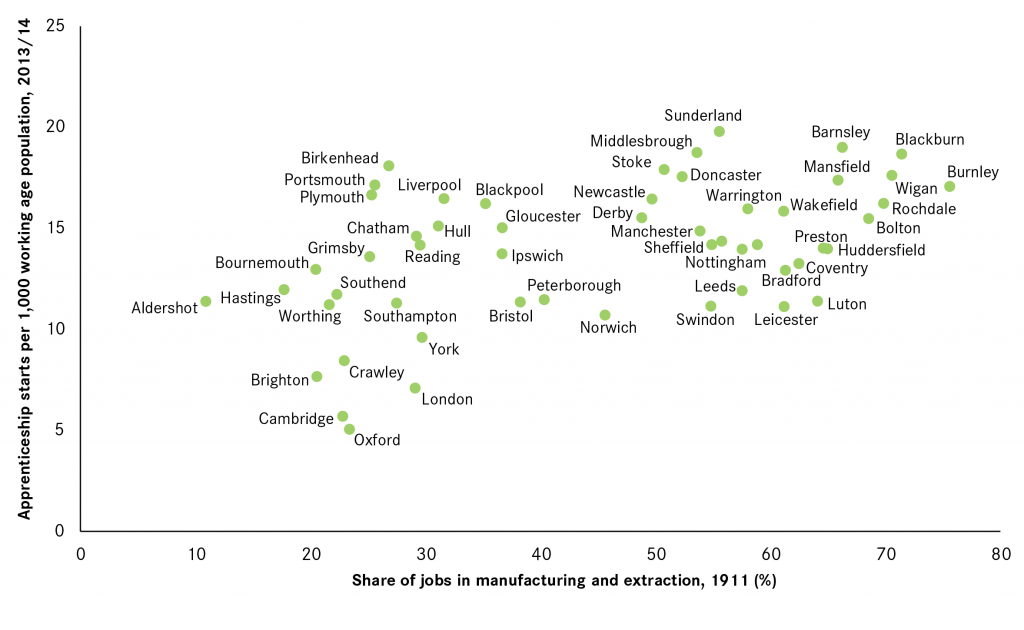 And many of these cities still have a high share of their industrial structure dedicated to manufacturing – in Hull, manufacturing accounts for 17 percent of all jobs. This relationship could lead us to think that the greater number of apprenticeships in northern cities is explained by their relationship with traditional industries, but this doesn’t seem to be the case – for a couple of reasons.

And secondly, the relationship between manufacturing and apprenticeship provision today isn’t the same across the board. In Birkenhead, just 8 per cent of jobs are in manufacturing, but the city offers one of the highest rates in England and Wales – 18 apprenticeships starts per 1,000 of its working-age residents. More significantly, however, the majority of apprenticeships in these cities are not in engineering and manufacturing, but business, administration and law. This is the case in every northern city except Blackpool (where health and public services comes out on top) and York (retail, leisure, travel and tourism). This suggests that there are other factors at play in the north-south apprenticeships divide, one of which may be that:

There are more apprenticeships in places with fewer jobs

A high job density is an indicator of the health of a local labour market, and suggests that an employer is likely to be more willing to recruit. We might assume that this applies to apprentices as well as employees. But actually, there’s an inverse relationship between the two, as the chart below shows. This raises big questions about how apprenticeships are being used in these places. It could mean, for example, that apprenticeships – which have a minimum wage of £3.30, as well as training costs being covered by the Skills Funding Agency – are being used as a substitute for labour in weak labour markets. 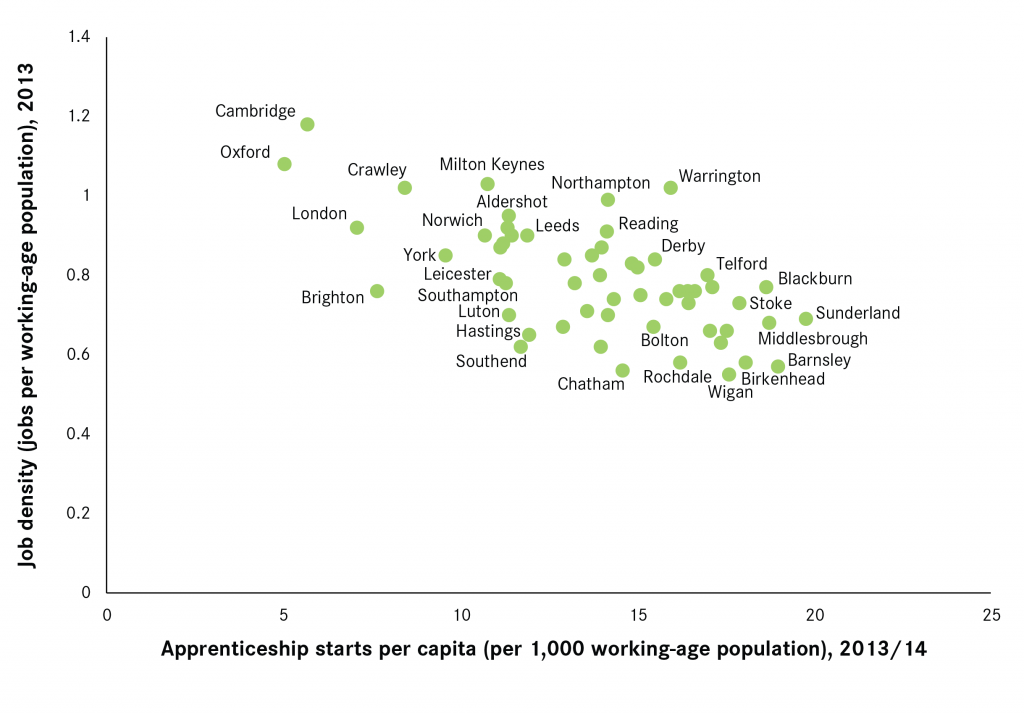 These findings raise some very real questions about the role that apprenticeships are playing, or should be playing, in cities across the UK. It’s likely that different places are making different decisions about how apprenticeships can be of value, but it’s also likely that there are a whole host of other factors that help to explain why different places offer apprenticeships. These may include, but are no means limited to, a system that incentivises the rebranding of jobs as apprentices, the industrial legacy of a place, or different perceptions among both employers and young people as to the relevance and utility of the apprenticeship system. These are issues and questions that we will be looking to explore further in our work this year.