Last week Centre for Cities updated our High Street Recovery tracker, which monitors footfall recovery across the UK’s 63 largest city centres. Overall footfall is now at three quarters of pre-pandemic levels, a record since the pandemic hit. But so far, the UK’s largest city centres have struggled to recover, mainly because they account for a larger share of office jobs which can be done from home. So, what does the November data tell us about the return to the office in these largest city centres?

The return to the office in large cities slowed during October

As summer ended daytime footfall experienced an uptick as people gradually returned to the office: between the end of August and the end of September, the weekday index in London and other large cities combined increased quite significantly (from 53 to 71 per cent of pre-pandemic baseline).

But this has slowed since. Data shows that by the first week of November, the average weekday footfall in large city centres and London was around 73 per cent of pre-pandemic baseline- just a two percentage point increase in over a month.

In central London, footfall recovery went up by only four percentage points, leaving the city at the bottom of the ranking with just 48 per cent its pre-pandemic levels. In Sheffield and Leeds, the increase was also fairly muted; whilst it actually fell in other large cities like Bristol, Manchester, Glasgow. Only in a couple of cities, like Newcastle and Nottingham, activity is closer to full recovery (and went up since last month).

Fridays have recovered the most so far, but Londoners have preferred Thursdays

Figure 1: Recovery of the catchment area in city centres on weekdays, November 2021 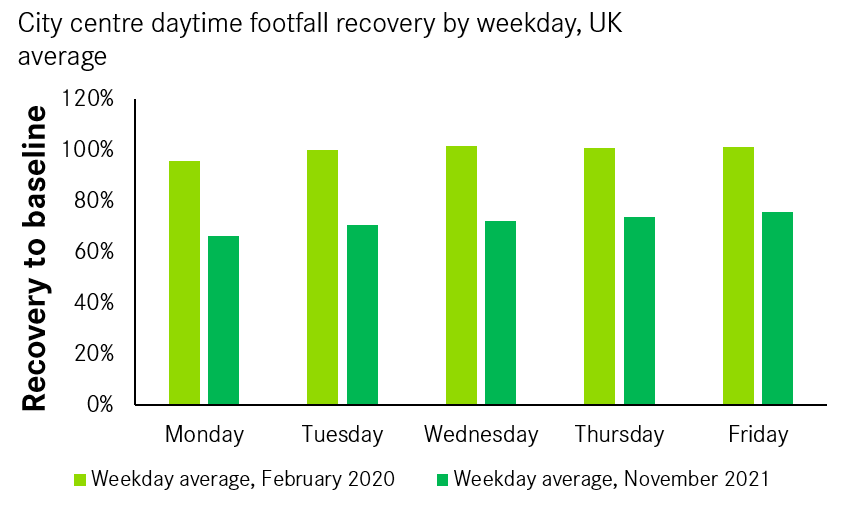 This varies between places though. Some large cities, including London, Birmingham and Leeds, Thursday are now the most popular days- whilst smaller and medium-sized cities have seen by far the most recovery on Fridays.

The footfall data used in the tracker allows us to understand not just people are, but also where they come from. And it shows that the make-up of weekday, day-time footfall has changed.

The recovery is driven by those who live closer to the city centre, while those who live further away are still reluctant to return to the office (Figure 2). This is particularly acute in London: at the start of this month, Central London weekday footfall from the suburbs was just 52% of pre-pandemic levels, and from outside London it was just 38%. This, given the wide catchment area London relied upon pre-Covid, explains its sluggish recovery.

Figure 2: Recovery of the catchment area in city centres on weekdays, November 2021 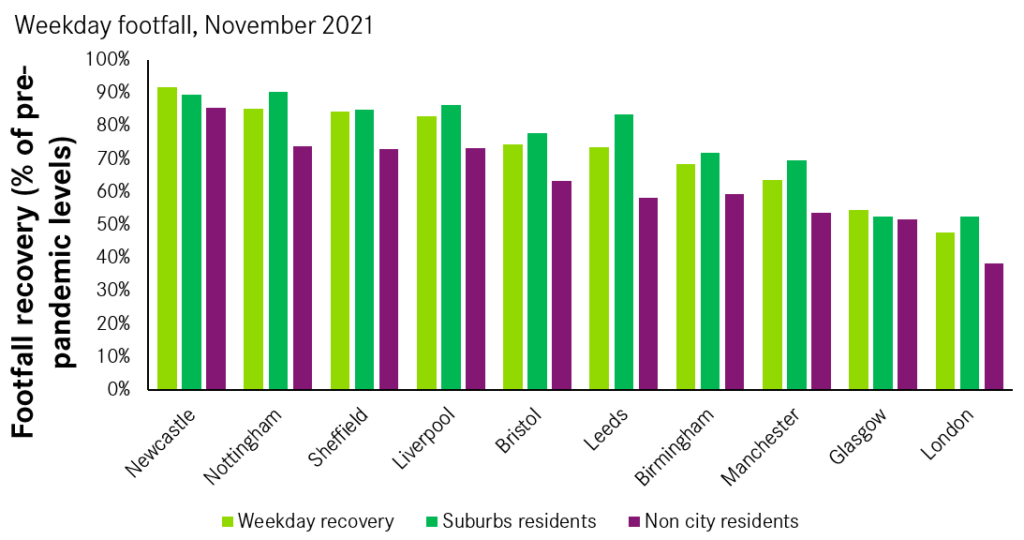 But it is a different story when it comes to travelling for leisure. Across a number of large city centres, shoppers coming from the suburbs and from outside the city boundaries have returned more strongly (and the gap between the two is much smaller). Weekend visits to Central London from the suburbs have now reached 84% of their pre-pandemic levels and visits from outside London have reached 65%- both much higher than weekday footfall.

Figure 3: Recovery of the catchment area in city centres on weekends, November 2021 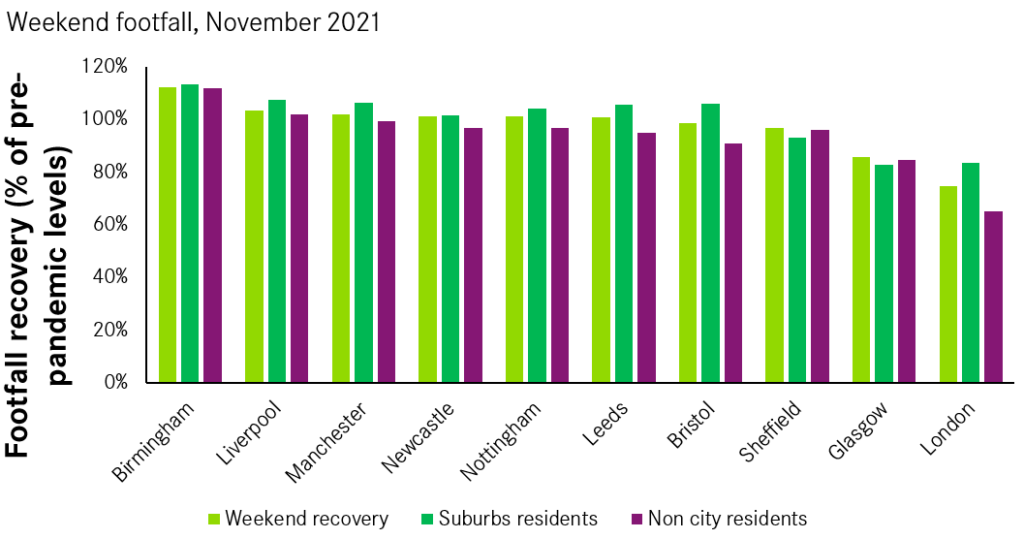 While it is great that city centres are progressively reclaiming their role as a prime destination for leisure and consumption on the weekend, the same cannot be said about their role as places for work; and in many places, the return of weekend shoppers is not enough to compensate for the absence of daily commuters who would spend their money on a sandwich for lunch or a drink in the evening. With a customer base still largely absent, those high street businesses located in the largest city centres are the most affected, and bridging the gap to full recovery will require workers to come back. If they don’t, more jobs in the local services sector will be at risk- especially now that furlough came to an end.