Concerns about the decline of British high streets regularly make headlines alongside a lengthy list of the threats they’re faced with. Some, such as the rise of internet shopping, are long-standing and largely predate the pandemic. Others emerged and persisted after lockdowns – like the rise of homeworking, and now, the cost of living crisis.

It’s not all bleak for the Great British High Street, though. By drawing on examples from places that are doing well, we can see what a sustainable, long-term future could look like for them.

1. Successful high streets will strike the right balance between different types of uses

The success of a high street depends on the economic strength of the city centre it sits in and as such not all of them perform the same. In economically strong city centres, like London, Reading, or Milton Keynes, the presence of high-value, high-paid jobs creates a market for shops and restaurants to sell to – and the high streets are vibrant as a result.

The lesson here for local policymakers and planners is that the success of the high street cannot be approached in isolation from the other functions city centres should serve, including, particularly, as places for work. Their role, therefore, is to create the right conditions to attract businesses to the areas around high streets, by ensuring the right provision of high-quality office space.

Recent planning reforms are making it easier to switch between different types of uses. Some of these go in the right direction: the recent creation of a single, merged commercial ‘E-class’ facilitates the conversion from shops into offices in places that suffer from an under-provision of office space.

In addition, another reform on permitted developments will enable conversions from commercial space into homes without the need for planning permission. This needs to be carefully monitored: while some extra residential space in city centres can be a good thing (to bring customers closer to local businesses), policymakers will need to ensure they strike the right balance. This is particularly the case in places where competition for space is already high, as too much residential land can put pressure on city centre economies.

2. Successful high streets will offer what we cannot find at home

High streets have long been retail-only destinations, and the sector continues to dominate them: it accounts for 40 per cent of all commercial space in UK city centres. However, the sector is increasingly threatened by the competition from online and same-day deliveries, as illustrated by the recent closures of retail giants like Arcadia, Debenhams, and Topshop. Post-lockdown spending patterns have shown very clearly how the nature of demand for bricks and mortar consumption has changed: sales in the food and drinks sector bounced back much quicker than those in fashion or general retail.

To survive and thrive, high streets will need to move away from over-reliance on retail and shift their offer towards the ‘experience’ leisure economy: bars, restaurants, cafes, cinemas or leisure centres are good examples. This happened organically in high-demand places like London or Reading in recent years. As Figure 1 shows, even before the pandemic, those city centres that had lots of high-skilled, high-paid jobs in them had a higher share of sales on food and drinks.  This again suggests, that the priority for local policymakers should be to boost demand; but they can also use planning powers to help do this.

Figure 1: In economically strong city centres, a higher share of sales tend to be on food and drinks 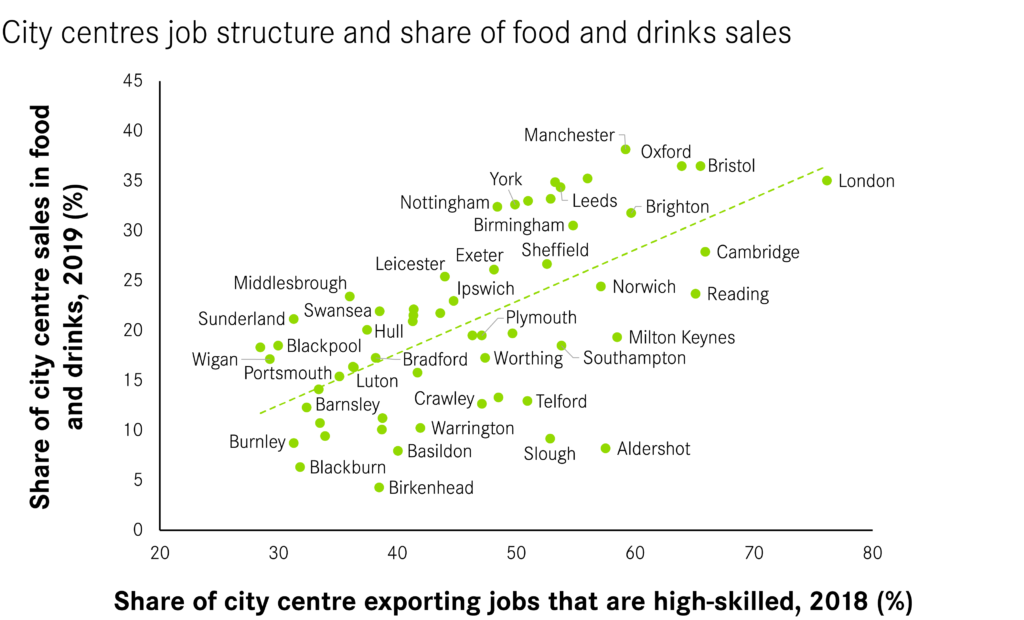 The vibrancy of a high street largely depends on people being able to access it. Historically, this has always been done by ensuring people could drive into the city centre. This now needs to change: pedestrianising high streets brings about wide range of benefits, including in air quality, safety and health.

It’s also good for business. Despite common concerns from shop owners: research has shown that people tend to spend more time and money when they’re walking around rather than driving in. This might involve trade-offs, and local policymakers should ensure that high streets are also easily accessible for those who don’t live in them and can’t just walk in (for instance, by investing in public transport or Park&Ride facilities). Overall though, evidence shows net benefits in pedestrianisation: in Coventry, for instance, new pedestrianised areas have led to a 25 per cent jump in footfall on Saturdays. In addition, repurposing parking spaces (for instance, for al fresco dining) has also proven quite successful for businesses too in the past couple of years.

Other measures, like pedestrianising a whole city centre, are still seen as too radical in the UK – but they have slowly been progressing in other parts of Europe. What the examples of Pontevedra in Spain, or Ljubljana in Slovenia show is that it takes political courage, but once city centres ban cars, there’s just no way back.

This briefing looks at the impact that homeworking is having on local businesses, how important it is for the high street that office workers return, and what prospects it faces if they don’t.

Introducing compulsory rental auction policy could be a good start, but more needs to be done to ensure businesses thrive

While it has been frequently claimed that the shift to home working has been a boon for suburban high streets, the data tells a different story

The old Use Class Order created and reinforced divides between cities, the new reforms put cities on a level playing field.