The next metro mayor elections will take place on 7 May 2020. The local elections at the start of this month were the final official indicator of how the parties are shaping up locally before next year’s votes.

As incumbent mayors and challengers begin to gear up for the contests, what clues can we take from local elections in metro mayor areas since 2017 about how they may perform?

Ben Houchen’s narrow victory in the 2017 Tees Valley mayoral election was one of the biggest wins in an excellent set of metro mayor election results for the Conservatives.  A post-industrial area, the Tees Valley was long considered a Labour stronghold. But there is no clear sign of a Labour bounce back since this defeat.

The 2019 local elections saw a net loss of 43 seats for Labour in Tees Valley’s local authorities. The party lost overall control of four of the five local authorities, as well as Middlesbrough’s directly elected mayor. The Conservatives saw a net gain of 7 seats, despite suffering one of their worst ever local elections nationally in 2019. With this in mind, Houchen seems to be in a stronger position going into next year’s re-election race, barring a drop in personal support or a near-total collapse in the national Conservative vote. 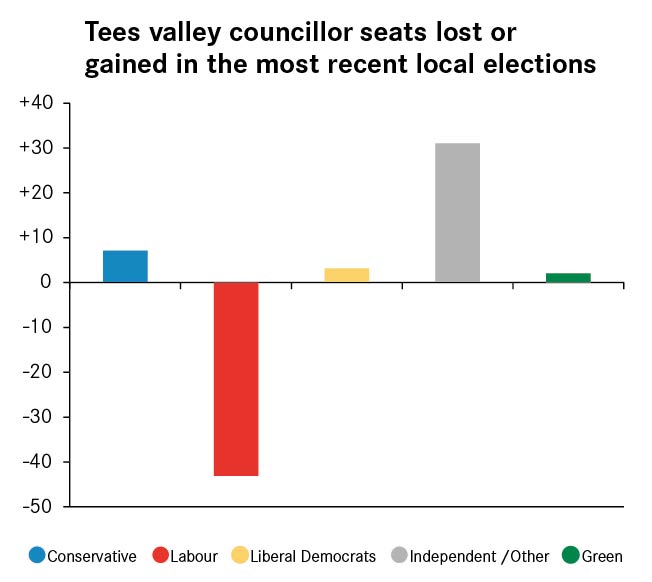 Another very close and surprising win for the Conservatives in 2017, Andy Street’s victory in the West Midlands mayoral election was viewed as a vindication of Theresa May and Nick Timothy’s embrace of blue-collar, ‘Erdington conservatism’. While traditionally Labour territory, the West Midlands’ vote for Street proved the Conservatives could make gains in working-class, Eurosceptic areas.

The 2018 and 2019 local elections have shown little movement since then. The Conservatives have made 12 gains overall. In Walsall they gained 7 seats while Labour lost 4 to take the council from no overall control thanks. The West Midlands mayoral election in 2020 may be on a knife-edge once again. 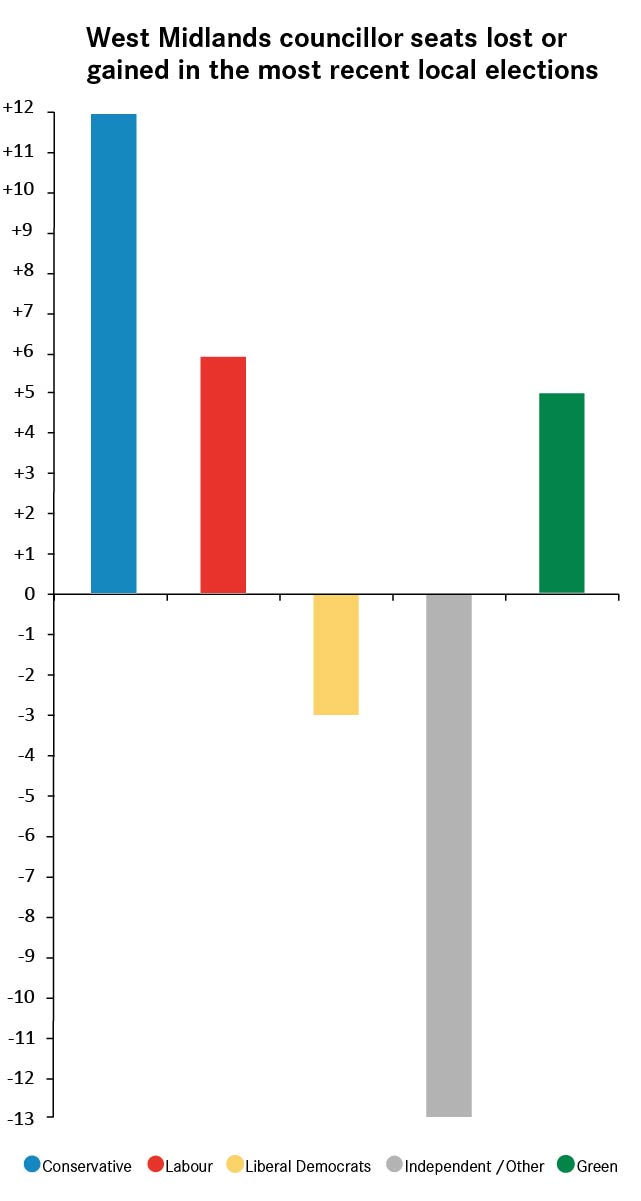 Steve Rotheram is in a strong position for next year. He won the Liverpool City Region mayoralty in the first round with 59 per cent of the vote, despite a bruising set of local election results for Labour that year nationally. Since then Labour has suffered a net loss of 24 seats in the region’s local authorities, and the Wirral is now in no overall control. Labour’s losses were the Greens and Liberal Democrats gains, while the Conservatives suffered a net loss of 3 seats. Recent elections don’t indicate that Rotheram’s chances are much weaker than in 2017. 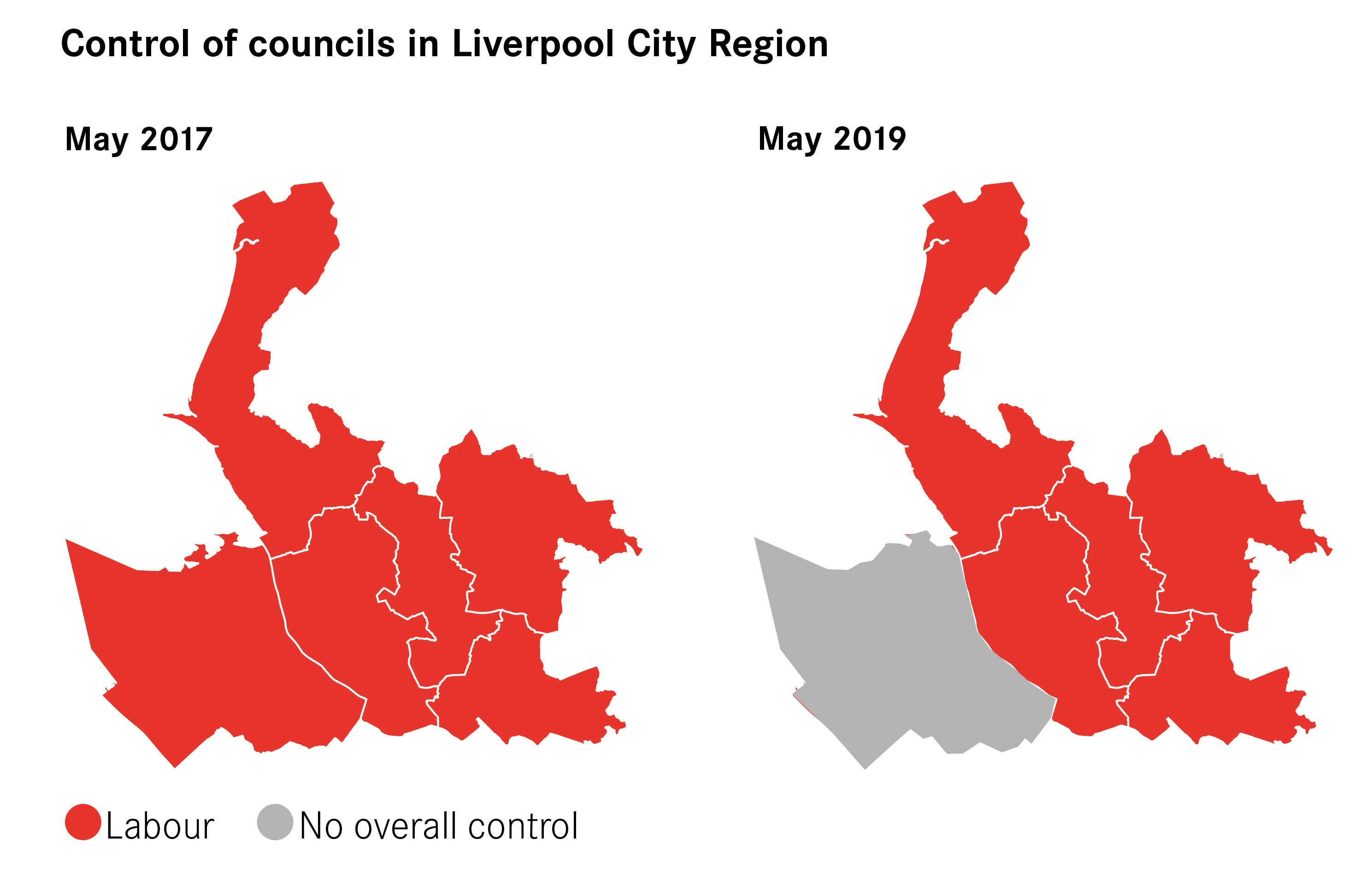 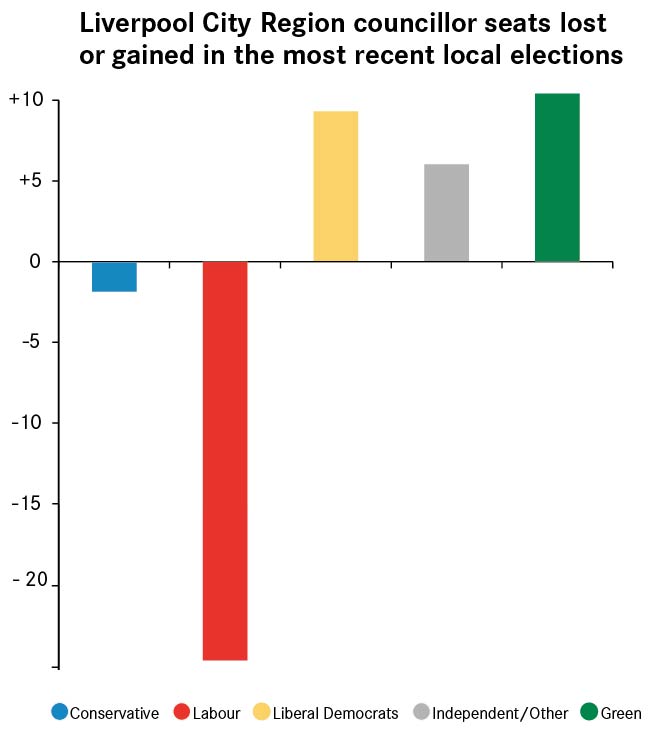 Greater Manchester was even more of a Labour stronghold than the Liverpool City Region in 2017. Andy Burnham romped home with 63 per cent of the vote. His position ahead of next year’s reelection race looks just as strong. Since then the Conservatives suffered a net loss of 16 seats in Greater Manchester’s local authorities, losing control of Trafford to Labour and helping the Liberal Democrats pick up seats.  In Stockport this helped Liberal Democrats to draw level with the Labour group there. This month Labour did lose control of Bolton. But like in Liverpool City Region, the strength and resilience of the Labour vote, despite difficult polling nationally, puts Burnham in a strong position, as he was in 2017. 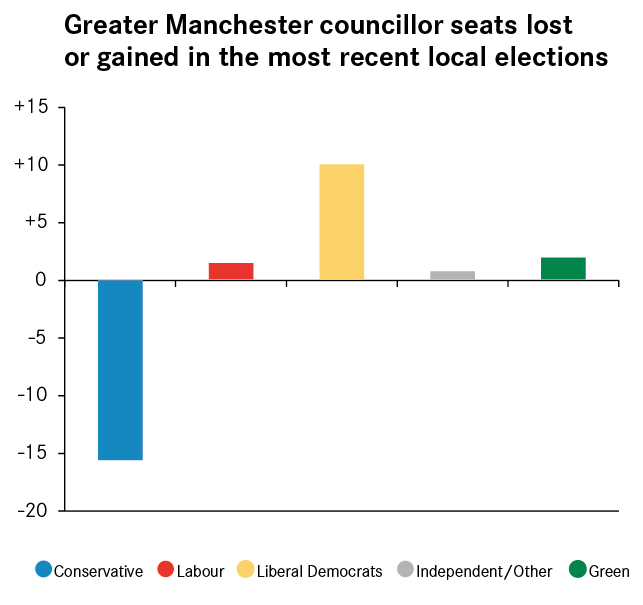 After what was almost a five-way race between Conservatives, Labour, Liberal Democrats, Greens and a strong independent, the West of England mayoral race was won by Conservative Tim Bowles in 2017. He won 27 per cent in the first round before 52 per cent – 70,000 votes – once second preference votes were counted. The next election, in 2021 rather than 2020, looks set to be tough for the incumbent based on recent local election results.

Labour’s performance in the metro mayoral race looked like a blip. In 2016, Marvin Rees, the directly elected mayor of the City of Bristol won with 68,000 votes, and in the 2017 General Election, the biggest Conservative to Labour swing was Bristol West.  The Liberal Democrats, who came third behind Labour in the first round, made gains at the Conservatives’ expense. In Bath and North East Somerset, the Lib Dems gained 23 seats o take control of the council in one of the biggest swings against the Conservatives in 2019. 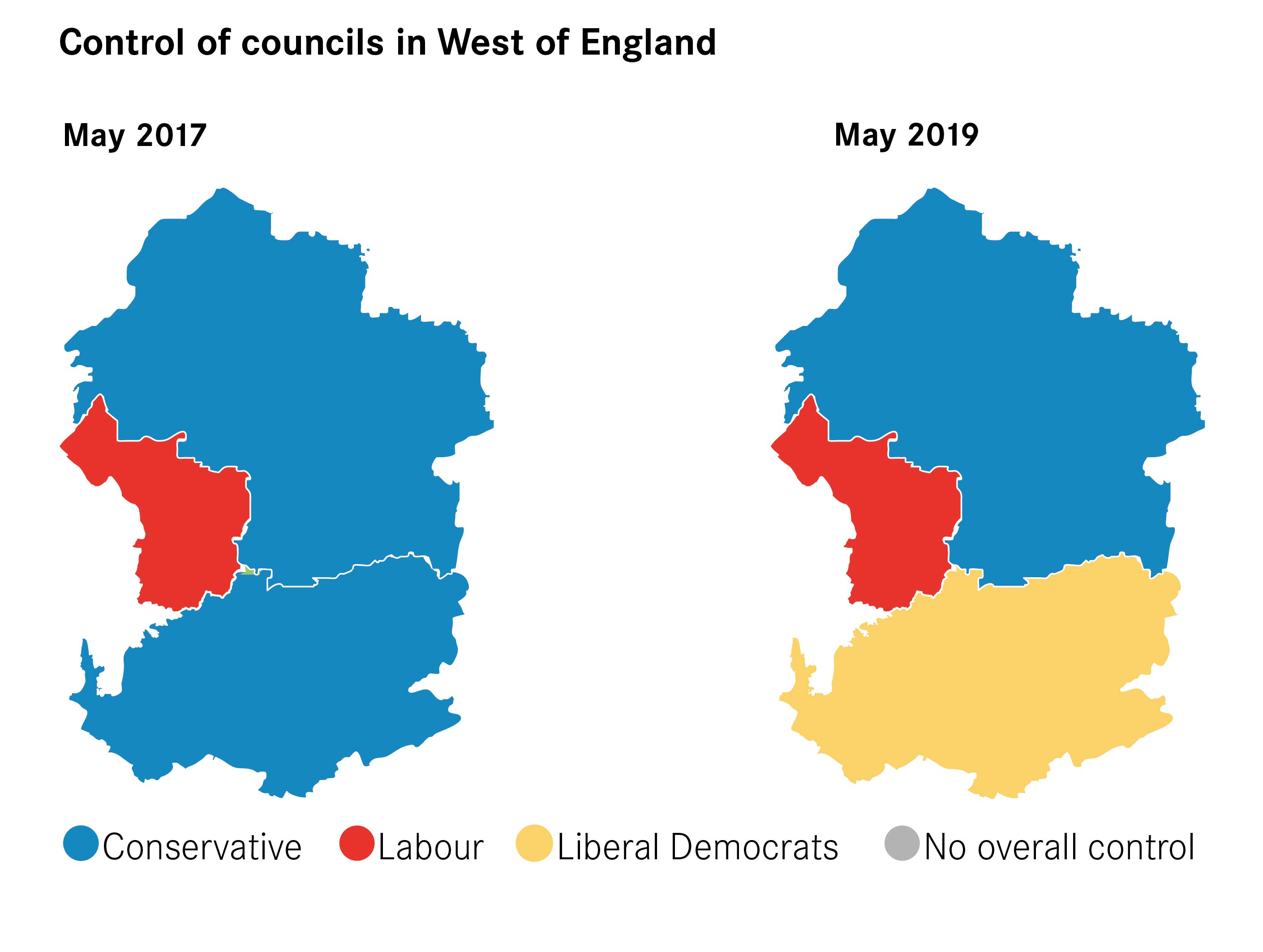 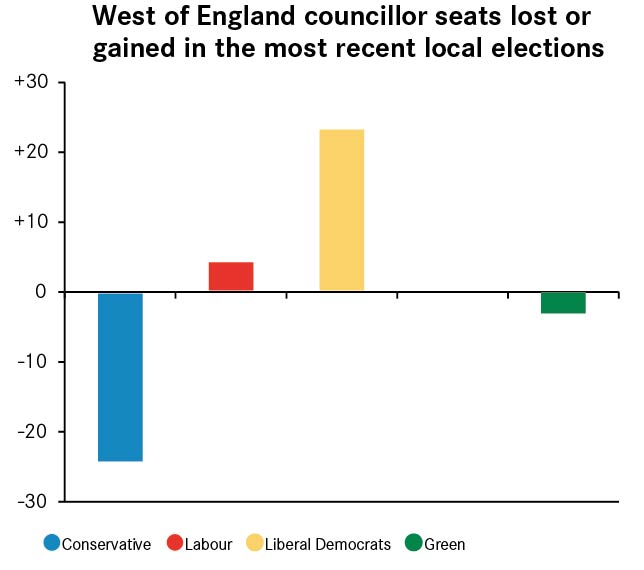 James Palmer’s victory in a race that covered large rural areas and Peterborough, a city with a Conservative MP  was perhaps the least surprising of the Conservative wins in the 2017 metro mayor elections. The Liberal Democrats were some way behind in second on 43 per cent compared to Palmer’s 57 per cent after the second round. However, 2021 may be a more difficult contest

Since 2017, there has been a net loss of 43 seats for the Conservatives, taking into account boundary changes that reduced the number of councillors in the county. The biggest swing was in South Cambridgeshire, where the Liberal Democrats took control of the council with a net gain of 20 seats in 2018, mostly at the expense of the Conservatives. East Cambridgeshire was also fertile territory for the Lib Dems this year, who gained 12 seats in 2019. In 2018, the Conservatives gained Peterborough before losing it again to not overall control earlier this month. 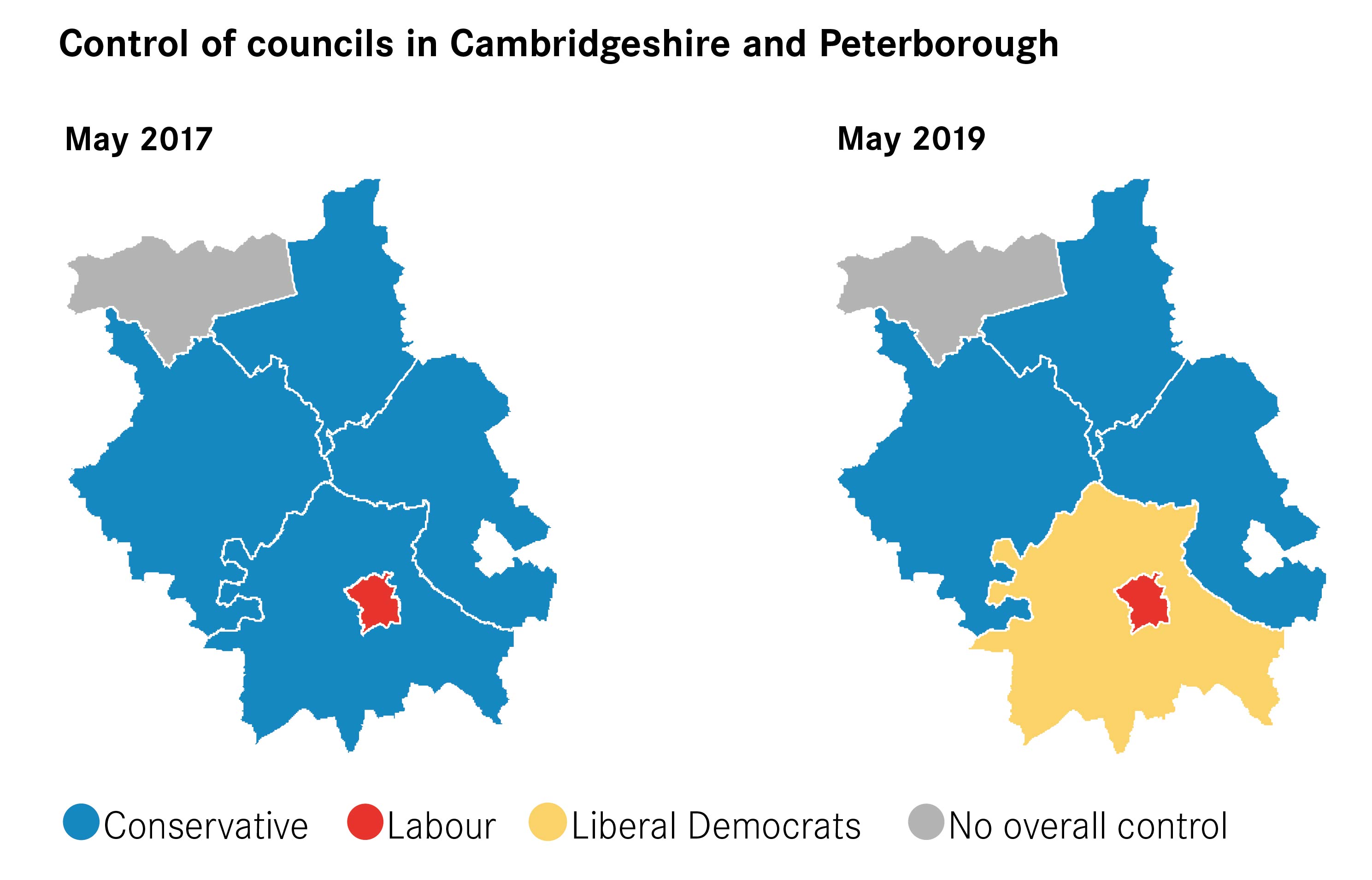 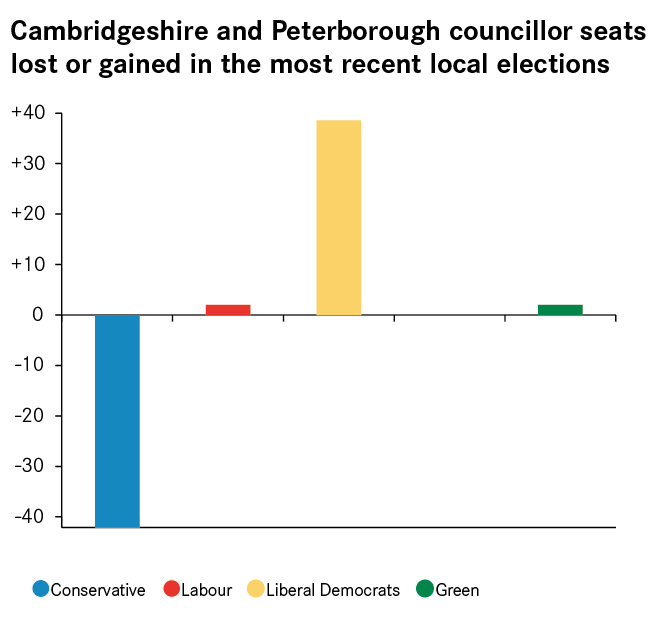 A week is a long time in British politics, so it is unwise to make any firm predictions about the 2020 metro mayor elections, and especially not the 2021 races. But the ongoing Brexit debates are moulding new political tribes across the country. If recent results continue into next year, this could be good news for Conservative mayors in the Midlands and North, but make life difficult for their colleagues in the South.