On Monday night the UK’s first local lockdown was officially announced, covering Leicester local authority and some of its neighbouring areas such as Glenfield, Oadby and Birstall. All non-essential shops and schools have been asked to close for an additional two weeks, while easing of restrictions planned for England from this Saturday will not go ahead in the area.

As of the end of June, the cumulative number of infections in Leicester (since the beginning of the Covid crisis) was around 1,452, which corresponds to 283 per 100,000 population. In the last month, the city has seen an 11 per cent growth in cases reported from Pillar 1 testing, and an even larger increase in positive cases from commercial testing. This is far higher than the national average (3 per cent) and only a few other cities – including Northampton, Basildon, Southend and Barnsley – have seen a fast rise in cases.

The question people have been asking is why Leicester has seen a rise in cases, but as an enquiry by Public Health England shows, there is ‘no obvious source’ of Leicester outbreak. Certainly, people have not flocked back to the city centre as lockdown has been eased. The bounce back in people going to the city centre has been in line with other city centres and movement data from TomTom shows a similar picture.

While the imposition of the city specific lockdown has caught the headlines, much less has been said about how policy should soften the economic impact of it. If the city – or any other city – is to have lockdown extended, then lockdown support should also be extended for the businesses affected. For example, businesses in Leicester should be allowed to put new employees on the scheme if they need to (from the start of this month firms can no longer do this), nor should they be asked to contribute to the Job Retention Scheme while lockdown continues.

What does the COVID-19 crisis mean for the economies of British cities and large towns? 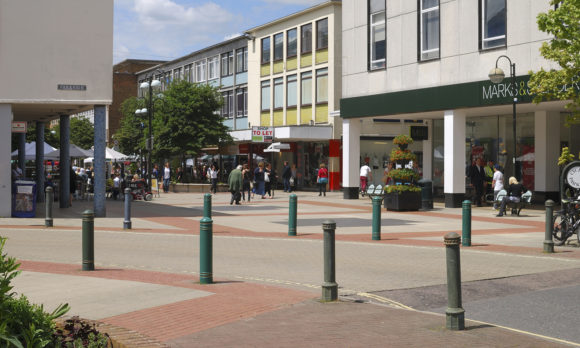 The lockdown also shows how local authority boundaries don’t reflect the areas that people live their lives over. As said above, Leicester’s lockdown area is wider than the local authority boundary. If the Government needs to impose local lockdowns elsewhere, this will no doubt be an issue once again. The bending of geographies for the response for Covid-19 reminds us how local government administrative boundaries don’t serve their communities well, for either health or economic purposes. This is a problem the Government will need to revisit through its devolution white paper once the crisis has passed.