Levelling up does entail greater devolution, and that in turn means Government must work with the mayors to meet their goals. Local leaders are currently developing their own approaches to levelling up and, as PwC UK’s Devolved and Local Government Leader Jonathan House said at a recent Centre for Cities event supported by PwC UK, the leaders have big questions to grapple with:

“How do you catalyse the economy into fair, sustainable, greener growth? How do we deal with the vulnerabilities that Covid-19 and Brexit have exposed in relation to global supply chain and to the UK’s healthcare systems? And then, finally, how to we tackle the inequalities that have been exposed and made worse by the pandemic?”

To discuss these issues we were joined at our event by three local leaders: Tracy Brabin the Mayor of West Yorkshire, Andy Burnham the Mayor of Greater Manchester, and Abi Brown the Leader of Stoke-on-Trent City Council. Here’s what they said.

Towns have been central to the Government’s messaging and policy approach to levelling up. The Towns Fund, the Future High Streets Fund, and a suite of Town Deals are all part of a programme which seeks to respond both economically and politically to the wishes of smaller towns. Levelling up was defined by the PM as in part “[restoring] people’s sense of pride in their community”, and visible improvements to high streets and smaller urban areas are seen as an essential foundation for the project.

But it is not just central government who sees towns as important – local city leaders do as well, with metro mayors covering not just big cities but the towns around them too. Tracy Brabin said that one of her priorities is to recreate “vibrant town centres” across West Yorkshire, and Andy Burnham stated that tackling Manchester’s own North-South divide is the next challenge for Greater Manchester. Stoke-on-Trent is famously a city made of six towns as Abi Brown pointed out, and local policy needs to address the needs of each one.

Central government will therefore have to work with the metro mayors and city leaders if it wants to support all towns, especially in the longer term. Improving the fortunes of towns which are near or part of larger cities will depend on improving the prosperity of the wider urban economy. Paradoxically, this means that in many towns the best way to improve their economic prospects will sometimes be to invest in nearby city centres. Supporting city centres as places of production is part of how local and national government can support town centres as places of consumption.

One of the most important yet underdiscussed parts of the PM’s speech was his account of the history of devolution. For “decades” the UK government “relentlessly crushed local leadership” because of an ideological conflict between central and local government. As explicit ideological conflict between local areas and national government has declined, devolution has advanced within cities, even if there are still disagreements. This account also sets up an expectation that cities which are willing to take on greater responsibility should be granted greater powers.

The mayors are ready to work with Government on this. Andy Burnham stated that on building a London-style public transport network “If [Government] backs us, I will praise it”. Likewise, Tracy Brabin said, “[We] can be partners with central government and help them achieve their levelling up agenda. We know how to do it, where to do it, and what our communities need.”

This is not the language of ideological conflict. Despite the disputes of the past year surrounding Covid-19, there is still an appetite among local leaders for collaboration with Westminster. Voters understand that responsibility for fixing local problems and funding is shared between local and national government, and the mayors and city leaders are going to want to lead on their own initiatives rather than simply delivering Whitehall-designed policy.

As reopening begins and the levelling up agenda gets underway, there is a chance for a reset in relations. Mayors should set out the tough decisions they are prepared to take in the best interests of their area. In return, central government should acknowledge that mayors lead on the levelling up agenda in their patch, and cannot be bypassed when local leadership disagrees with the centre.

The Secretary of State’s letter and the PM both emphasised that devolution will now expand to include non-urban areas, particularly counties. Devolution is to “widen beyond the cities”, and councils have been invited to present devolution deals to achieve this, while previous conversations with the existing mayors will simply be “engaged further” to ensure they have “the powers they need”.

Yet though devolution is more advanced in the big cities, it is still incomplete. For instance, Andy Burnham argues that Greater Manchester struggles in part because it still does not have the same powers London has over transport. Other big cities with metro mayors have even fewer powers than Manchester, and all are still weaker than counterparts in numerous big cities abroad. Mayors need to make the most of the powers they already have – such as congestion charging – but if central government wants them to take on more responsibility, they will need more autonomy and power.

Furthermore, devolution outside the big cities must recognise smaller cities. Those like Stoke-on-Trent are willing to take on more responsibility, but need the resources and scale to do so. Such urban areas will need to work with county and nearby district councils to unlock this, and in turn their devolution deals must chime with the economic geography of each place and recognise their urban nature, even if led by county councils.

In addition, big cities and small cities alike suffer from the endless bidding process for accessing central funding – Tracy Brabin and Abi Brown both agreed that the “beauty contests” wasted local resources, set places against each other, and damage local self-reliance. Given this, further devolution should reform the local government funding and finance settlement with greater certainty and control over budgets at the local level.

You can read more of Centre for Cities’ work on levelling up here and PwC UK’s here.

Ready to recover? Levelling up and building back better 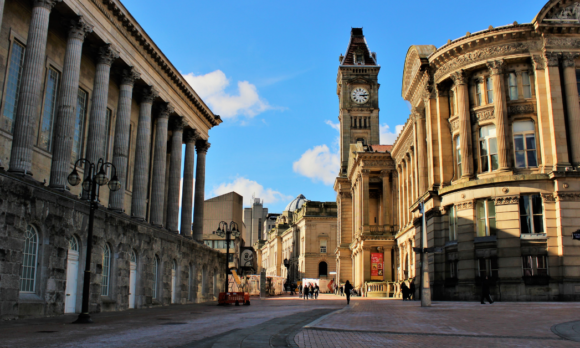 Devolution Levelling up Mayors
Coronavirus Future of cities High Streets Levelling up Towns
How has the pandemic impacted high streets up and down the country?