Only 3 per cent of urban residents across England and Wales live in city centres. Yet the demographics of the people that live in them are a good predictor of the economic performance of that city as a whole.

That’s because city centres are the most dynamic parts of urban economies, and their performance has big implications for the economic performance of the wider city-region. Our previous work has shown that the concentration of jobs in city centres – particularly knowledge-intensive jobs that benefit from the agglomeration externalities – has been an important factor in supporting overall economic growth in cities such as London, Brighton, Milton Keynes and Manchester.

And our recent Urban Demographics report shows that city centres are also increasingly places where people choose to live. While suburbs continue to play a significant role in providing housing – 55 per cent of the population of England and Wales live in a suburb – city centres have been the fastest growing parts of cities over the last 10 years, growing by 37 per cent between 2001 and 2011.

Much of this population growth has taken place in the city centres of large cities, such as Sheffield, Manchester and Bristol. In these cities, city centre residents tend to be young and highly qualified; they are most likely to be students or working professionals; and they also tend to work in city centres, suggesting they value short commutes as well as the amenities that city centres offer.

And as the chart below shows, these two trends – the concentration of jobs in city centres and the demographics of the people who are choosing to live there – are closely related. Those cities with a high share of city centre residents employed in professional occupations also tend to have a high share of their overall jobs located in city centres. The chart also indicates those cities which have strongly performing economies overall (based on a typology we developed). These cities are clustered towards the right hand side of the chart, illustrating that strong economy cities are most likely to have strong ‘urban cores’ that are home to large numbers of highly qualified city centre residents working in professional occupations. 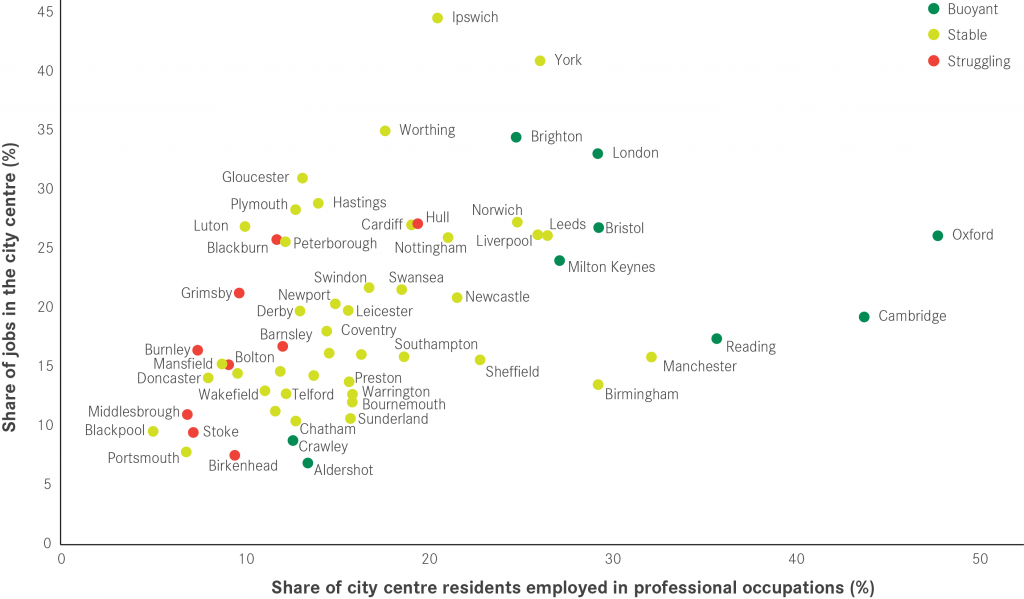 The relationship between these two city-centre related characteristics and overall city economic performance underscores the important role that city centres are playing in driving local economic prosperity, and make it clear that if UK cities are to compete in the 21st century, they need to prioritise ensuring their city centres are attractive places both to live and work.