The first metro mayor of the West of England will preside over one of the strongest economies outside London, but will also face challenges in dealing with the costs of that success. Most of the mayoral candidates have published detailed manifestos offering concrete plans for what they’ll do if elected, with the exception of Conservative candidate Tim Bowles and Aaron Foot of UKIP (who have set out only brief overviews of their pledges, included in the tables below). Here are three key themes that are central to the other candidates’ policy platforms: 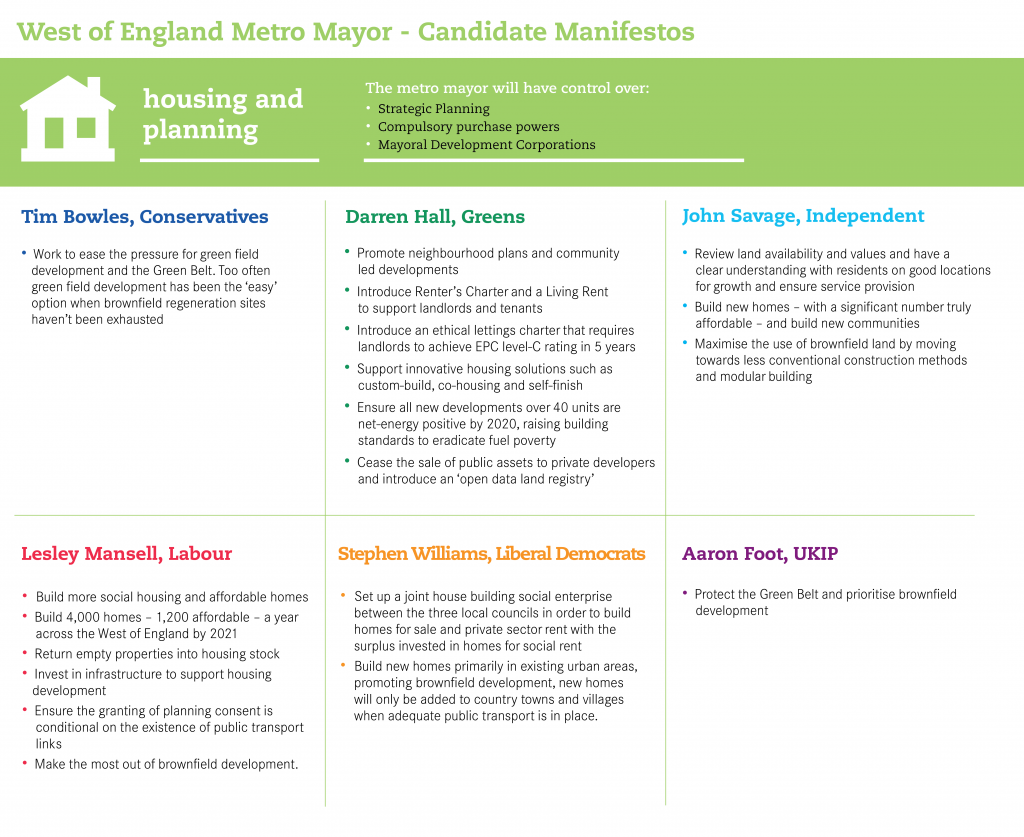 Getting more houses built is top of every candidate’s priorities. This is welcome given the city region’s high house prices (which are around 11 times average local income), and both firms and residents have called on the new mayor to focus on this issue. All candidates have pledged to make the most of existing urban areas through brownfield development. Lesley Mansell (Labour), Darren Hall (Green Party) and John Savage (Independent) have also pledged to explore other opportunities across the region – conditional on the availability and/or creation of appropriate transport links – though details on these opportunities are scant in the manifestos. Yet, this alone might not be enough to solve the West of England’s housing challenge. As our research shows, the city region cannot realistically meet its housing needs without reassessing the green belt, and whoever is elected will have to take difficult decisions in this area. 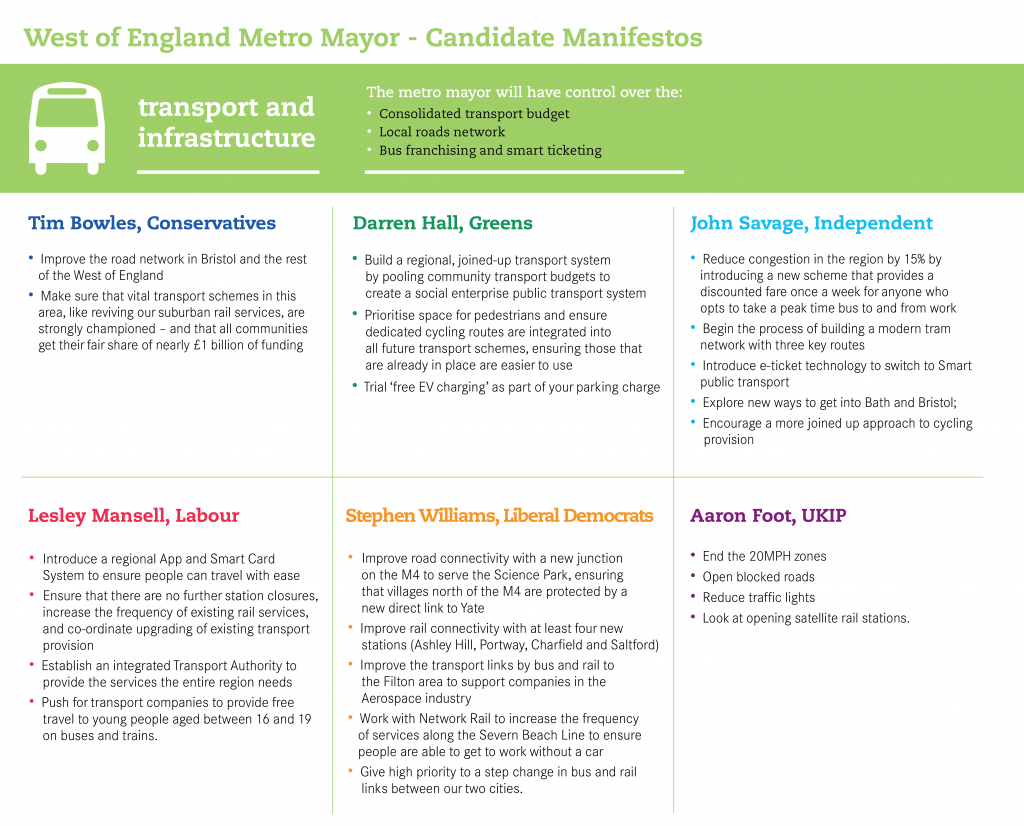 Transport is another top priority in the manifestos. Our West of England mayoral briefing shows that an efficient and integrated transport system would help to unlock further growth for city region, by enabling people to make the most of new opportunities in the region. As such, Lesley Mansell will establish an Integrated Transport Authority, and will introduce a Regional App and Smart Card. Stephen Williams (Liberal Democrats) has pledged to improve road connectivity, introduce new rail stations and additional bus routes, and prioritise new links between Bristol and Bath. Darren Hall says he will pool community transport budgets and build a regional, joined-up transport system. Ultimately, however, as with housing, tackling the area’s congestion problems will require a long term strategic plan for the whole city region. 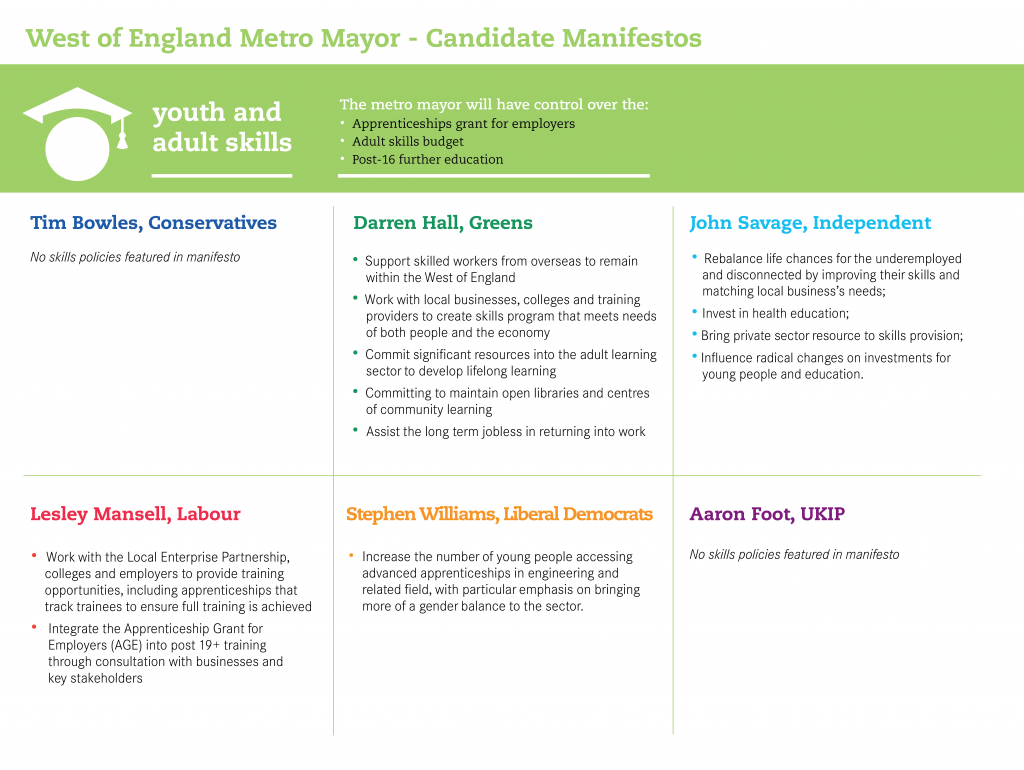 Improving skills levels in the city region will be crucial in ensuring it can continue to attract high-skilled jobs, and that local residents can access those jobs. Stephen Williams has pledged to increase the number of young people accessing advanced apprenticeships in engineering, while both Lesley Mansell and Darren Hall say they will work with Local Enterprise Partnerships, employers and training providers to create skills programmes relevant to the region’s needs (Hall), and to ensure “full training” is achieved (Mansell, who does not elaborate on what that might comprise of). Currently, the West of England performs better than the national average in terms of skills and productivity, and ensuring further improvements in these areas would allow the region to keep growing in the future.