These questions and others like it are the ones giving the Chancellor and his advisers sleepless nights as the Budget draws near.

The answer to how we get growth is not straightforward, as the wonderfully varied (and in many instances outright contradictory) suggestions put forward by individuals, organisations and interests from across the economic and political professions illustrate. Many of the enablers of economic growth that have been suggested as part of the debate – improved skills levels, investment in infrastructure, stronger innovation networks – whilst important will take time a long-time to affect the economy.

As we highlighted in our annual health check of UK cities, Cities Outlook 2013, there is one area where effective interventions have the potential to generate jobs and growth in the short term: housing. Building houses as quickly as possible in 2013 would provide a much needed boost to the UK economy, as well as tackling some pressing economic and social challenges, and should be at the heart of the Government’s economic strategy.

Housing currently employs around a quarter of a million people in Britain and contributed almost £18 billion to the economy in 2010. Government research suggests that every 100,000 new houses built could boost Gross Domestic Product by one per cent and support up to 150,000 jobs. While £1 spent on housing creates £2.09 in direct value for the economy.

Of the 400,000 homes on stalled housing development sites in England and Wales identified by the Local Government Association, 240,000 (60 per cent) are in cities.  As shown in the table below nearly 120,000 of these homes – around half – are in strong economy cities where affordability ratios are above the national average.  Getting these built should be the short term priority. 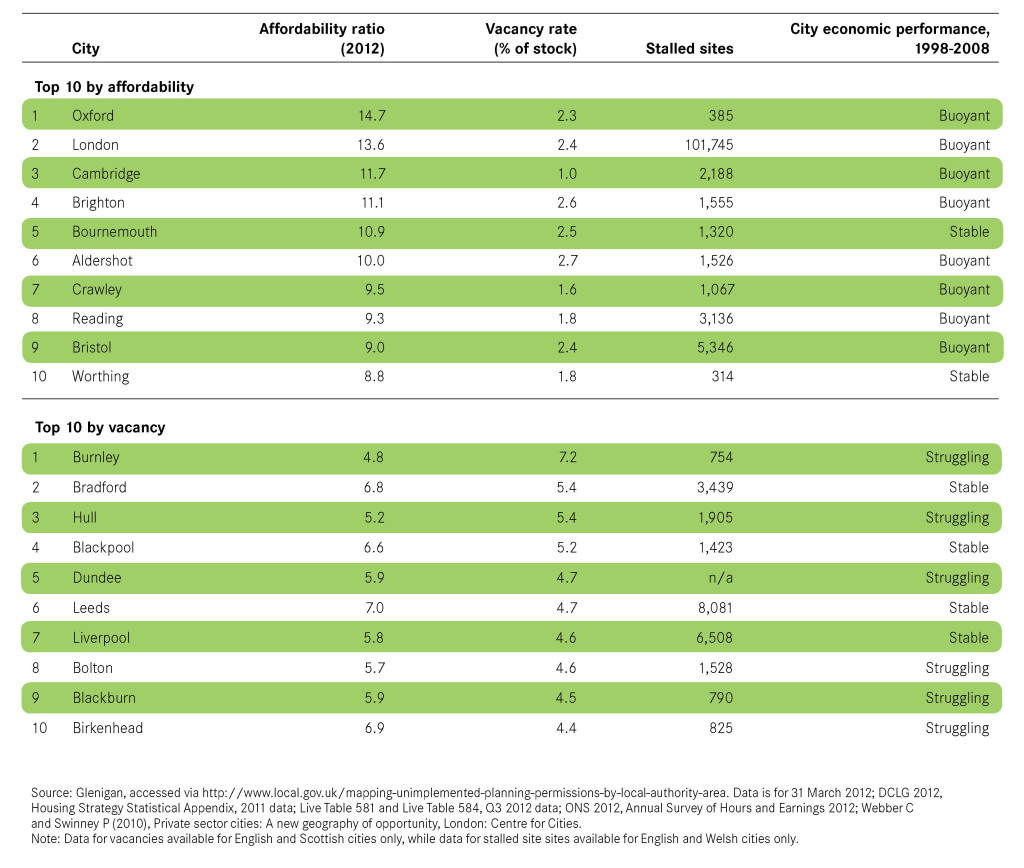 So how do we do it? Existing housing initiatives such as Get Britain Building and New Homes Bonus and any additional ones included in the Budget should be aimed explicitly at restarting stalled developments in cities where the economy and housing market are strong.  Focusing on these cities should produce the strongest economic impacts.

In addition to this focus on unlocking these stalled sites, we also need a raft of other policies to stimulate housing-related activity.  We need greater incentives for home-owners and landlords to improve the quality of the existing housing in cities – incentives to support this should include equalising VAT on refurbishment vis-à-vis new build.  We need to expand the remit of the Green Investment Bank to include retrofitting housing, and removing the ERDF retrofitting funding cap. We need to give more autonomy to cities to directly fund and build new housing by allowing them to borrow against housing assets.  And we also need to generate more competition in the housing market, for example by supporting housing associations to build private housing for sale and rent.

If we want growth, particularly in the short-term, then housing seems to be the best bet.  It worked in the 1930s and it can work now.  But in order to do it the vested interests of volume house-builders, existing home-owners and vote seeking politicians (local and national) will need to be tackled.