In the past month earnings and wages have been high on the political agenda thanks to debates about the public sector pay cap, stagnant incomes and the living wage. The latest labour market statistics released yesterday reveal that earnings have decreased by 0.3 per cent in real term compared to last year. But how do these issues play out in different cities across the UK – and what disparities do we see and why?

Examining the geographical and sectoral dimension of trends in wages and earnings over recent years highlights four issues in particular:

1.Workers outside the Greater South East are more likely to be lower paid

As you might expect, there are clear geographical variations in wages across the country – for example, average weekly workplace earnings in Hull are £461 compared to £578 in Edinburgh and £634 in Reading. While the picture is more complex than a simple North/South divide, the map below shows that cities with the highest average wages are mainly located in Greater South East.

2. Within cities, private sector wages have been more affected by the recession – and are generally lower – than in the public sector

This is partly because the private sector has been hit harder by the 2008 recession than the public sector. Between 2006 and 2016 wages decreased in almost every city in real terms, but decreased by only 1 per cent in the public sector compared to 7 per cent in the private sector (in which average wages are yet to return to their pre-crisis level).

Another important reason for this disparity is that the public and private workforces are not equal in terms of skills and job occupation. According to the IFS, public sector workers are better educated, with 57 per cent of them having higher education qualification compared to 36 per cent in the private sector. This helps explain why, overall and in most places, the public sector pays better.

3. Industrial structure has a big influence on disparities between private and public sector wages

The disparity between public/private wages, and the relative consistency of public sector wages in different places, suggests two things: first, much of the variation seen in wages across the country is driven by the private sector; second, the difference between public and private wages highlights the weakness of the private sector in many cities.

To confirm that second point, the chart below shows that cities with a higher share of KIBS jobs tend to pay higher average wages.

4. But industrial structure does not tell the entire story – agglomeration also drives up average wages within cities

Interestingly, the data shows that wages for similar level of occupation also varies between cities. For instance, a professional occupation job (this includes lawyers, architects, doctors and teachers) pays the most in London (£857 a week on average) and the least in Southend (£582 a week, almost 1.5 times less), although the two cities are only 50 minutes apart by train. 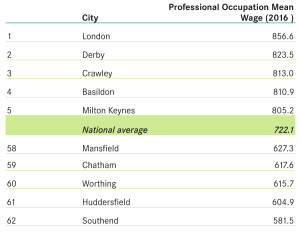 This is likely to be because of the process of agglomeration – that is, the concentration of economic activity in a city. The productivity of a person depends not only on the skills of the individual, but also the networks of people that they work with, which successful cities provide. It is this second element that allows a solicitor to earn more in London than in Southend.

Although wages are a recurrent topic in the public debate, the discussion often fails to take into account the importance of geography. These findings show not only the weakness of the private sector in many cities, but also the role that location plays in shaping wages.

Closing the wage gap will mean improving the ability of cities outside the Greater South East to attract and grow high paid private sector jobs. This is why understanding the role of place is so important, as the Government moves towards publishing its industrial strategy white paper. You can read more about this in our briefing on what a place-based industrial strategy looks like.