This week, Centre for Cities published Cities Outlook 2022, our annual health check of the UK economy, with this year’s edition analysing the impact of the pandemic on the UK’s high streets. Our launch event featured conversations with some of the country’s most prominent local leaders to understand the recovery of their cities through various lenses, how places are considering redefining and repurposing what they offer to workers and consumers, and what this all means for the government’s levelling up agenda.

You can watch a recording of the event here.

City centres as places of work are slowly recovering across the country, but they are still not back to their pre-pandemic levels of footfall and spend during the week

The speakers all noted how although footfall and spend figures during the week are slowly recovering, comparing pre-Covid to current weekday data shows that cities are still lagging as places of economic activity due to changes in working patterns caused by the pandemic. Tom Riordan noted how in Leeds, the return to the office was thought to be “the biggest unknown” in terms of the frequency with which workers will come back to city centres, but the panellists agreed that coming into cities for work is by no means over. Instead, a more balanced approach between office and home working will likely be sustained, and this will lead to different patterns of work and leisure, for example with Thursday “becoming the new Friday” for after work socialising.

Companies and workers alike are now thinking of work as a multi-purpose place, rather than solely an activity, and this will likely have knock-on effects for the future of offices. However, the benefits of office working for collaboration, particularly in higher-paid sectors, were raised by panellists, with a strong market for office spaces likely to remain but with a focus on upgrading existing stock. The focus on high-growth sector firms driving the recovery was echoed across cities, with Tony Reeves and Caroline Green highlighting the Liverpool-Manchester axis and Oxford’s life sciences sectors.

The speakers were more optimistic on the recovery of cities as places of consumption and leisure during weekends, with the rebound in retail being particularly strong for cities such Oxford which were reliant on office workers and students pre-pandemic. Tom Riordan noted more people were visiting Leeds city centre on weekends compared to before the pandemic, with locals taking fewer trips but spending more at one time.

The reinvention of the high street and a move away from the reliance on traditional retail due to Covid-19 was a common theme across the cities, with panellists echoing that now is the time to rethink the purpose of town and city centres whose deterioration had begun before the pandemic. The focus on the experience in encouraging shoppers was emphasised throughout, with the need to replace “tired” retail with attractive and engaging destinations. The panel also noted the importance of acting quickly to repurpose empty retail spaces which might have previously been an anchor for local areas. London’s High Streets for All initiative was used by Jules Pipe as an example of a tool to incentivise local partnerships in reimagining local centres and reinventing vacant and underused buildings.

However, concerns remain around tourism, with the expectation in large cities that pre-pandemic tourist levels will return only in 2026. Looking again at London, Jules Pipe noted the central zone has suffered most due to a greater reliance on external visitors, with an estimated £11 billion lost due to a decrease in tourist visits; this is likely to have a knock-on effect across the UK as many tourists use London as a spring board to visit the rest of the country.

Rethinking the public realm, transport, net zero and empowering cities will all be crucial policy levers for driving the recovery of cities

In terms of what needs to change, the panel highlighted that people need to be encouraged back to cities to drive growth in several ways. Caroline Green and Tony Reeves noted how improving the design of the public realm could encourage visitors back to using amenities, for example through closing streets and opening up hospitality spaces to support businesses with revenue challenges due to lost patronage during Covid. The leaders also noted the “critical importance” of public transport to connecting people and tourists to businesses and high streets, particularly as cities will be the drivers of the net zero agenda.

Buses were highlighted by Abi Brown and Tony Reeves as being the key mode of transport to support the recovery given they are most important for economic inclusion, but ridership has stalled and the quality of services is not good enough, driving congestion and worsening air quality. Reports that the national bus strategy’s funding is likely to be cut will only hinder the recovery; government must continue to support bus operators and networks whilst considering regulating services outside London.

Andy Burnham highlighted the correlation between cities’ and towns’ economic successes, and the need to dispel the idea that towns can be productive even if their nearest city is not economically strong.  Similarly, empowering cities and towns across the whole of the UK will not be achieved by encouraging competition for pots of money; there needs to be a targeted, long-term approach to city and town centre revival.

Regarding the contents of the long-awaited Levelling Up White Paper, the panellists and Sebastian Payne all agreed that real change would only come with the devolution of power and resources. The panel noted that fiscal devolution should be a priority, allowing local leaders to raise further revenues to support local amenities to stay open, whilst more powers should be devolved to regional mayors, as well as giving local areas the opportunity to have a say in how the Shared Prosperity Fund is distributed.

Andy Burnham spoke about how power on skills should no longer be “hoarded” by Whitehall; it makes little sense to centralise skills strategies which are needed to support Local Industrial Strategies, whilst unused funding from apprenticeship levies should be retained locally to make full use of the apprenticeship budget or to be reinvested into other parts of the skills system.

On levelling up as a political project, Sebastian Payne noted that the pressure on the British state given the ongoing news cycle, the cost of living crisis and geopolitical tensions could cause disruptions to the government’s political agenda. “Levelling up” should not be a short-termist agenda intended to win votes, but a focused delivery model with metrics which will span several administrations and deliver progress for the areas which need to close their productivity gaps. 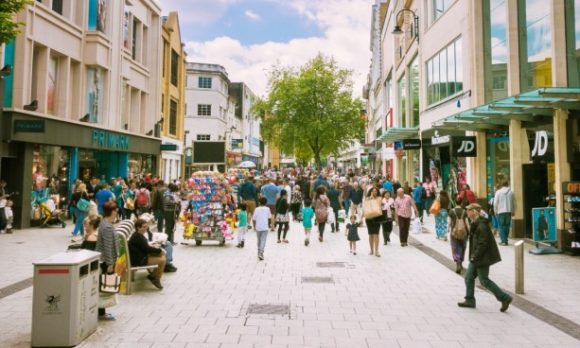 Coronavirus Future of cities High Streets Mayors Towns
Future of cities
Which parts of the UK make the greatest contribution to the national economy?