This week’s launch of Cities Outlook is the eleventh of our annual health checks on UK city economies. It has become well known among city leaders and policy makers for the wide-ranging data it features, which offer a unique insight in the performance of UK cities across a range of economic indicators, from productivity through to carbon dioxide emissions.

That it looks across a broad range of issues is important for local policy makers for two reasons. The first is an obvious one: measuring economic performance at the local level is very difficult. Some of this is down to how the data is collected – much of the data is produced on an annual basis and lags national level data by at least a year. Meanwhile, the survey approach used for a number of data sets can mean that any one indicator can swing year-on-year as a result of having small samples, rather than because of any underlying change in the economy. Being able to look at a basket of indicators therefore gives a more consistent picture than any one indicator on its own.

The ONS has made a lot of progress in this area in recent years, with a number of new more detailed datasets having already been released or in production. And the passing of the Digital Economy Bill last year opens up a wealth of administrative data that can both fill gaps in the available data and vastly reduce issues around sample sizes (because it draws on the population as a whole through tax records etc. rather than on the output of a survey). These innovations will improve both the measurement and understanding of city economies, but it is likely to be a number of years before we see the outcomes that the Digital Economy Bill enables.

The second benefit of taking a wider view of local economies is that it allows links to be made between datasets to give a better understanding of what each series really shows. For example, looking at the inequality indicator alone shows Cambridge to be the most unequal city, and Burnley to be most equal. This doesn’t paint a particularly great picture for Cambridge.

But putting this in context with other economic indicators shows that cities that are more successful tend to be more unequal, partly driven by the greater availability of higher-skilled jobs. So the flip side to this indicator is that it reveals the lack of job opportunities in those cities that are most equal. 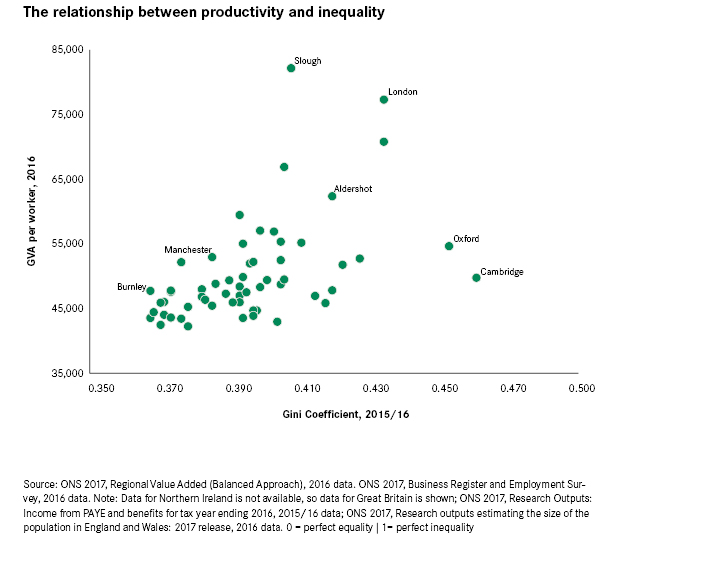 Of course, as the famous quote attributed to Einstein goes, not everything that counts can be counted, and not everything that can be counted counts. Hopefully the work by the ONS reduces (if not eliminates) the former issue. In terms of the latter, we have chosen our selection of indicators in Cities Outlook on the basis of what we believe is most important for understanding the economy – you can read more detail explaining our thinking in Chapter 3 of the report.

For the practitioner, understanding a city through data is a crucial step in formulating policy to improve its economic performance. Complementing the main report, our interactive data tool allows users to create tables, maps and scatter plots of a range of data to do just this.

Watch this space for more analysis and commentary on Cities Outlook 2018 in the coming weeks.