Unemployment has fallen for the second consecutive month to March. Yet the outlook remains fragile as part-time work and self employment increase in the absence of full-time job creation.

The picture across UK cities continues to look very different. To highlight just how different we’ve compared ILO unemployment rates by city to countries around the world. Unemployment rates in Crawley are comparable to unemployment in Norway; Bristol to Sweden; Stoke to Bulgaria; Hastings to Iceland; Middlesbrough to Portugal. 230 miles from Chatham to Swansea takes you through Cyprus, US, the Netherlands, Czech Republic, Sweden, Turkey and Hungary. 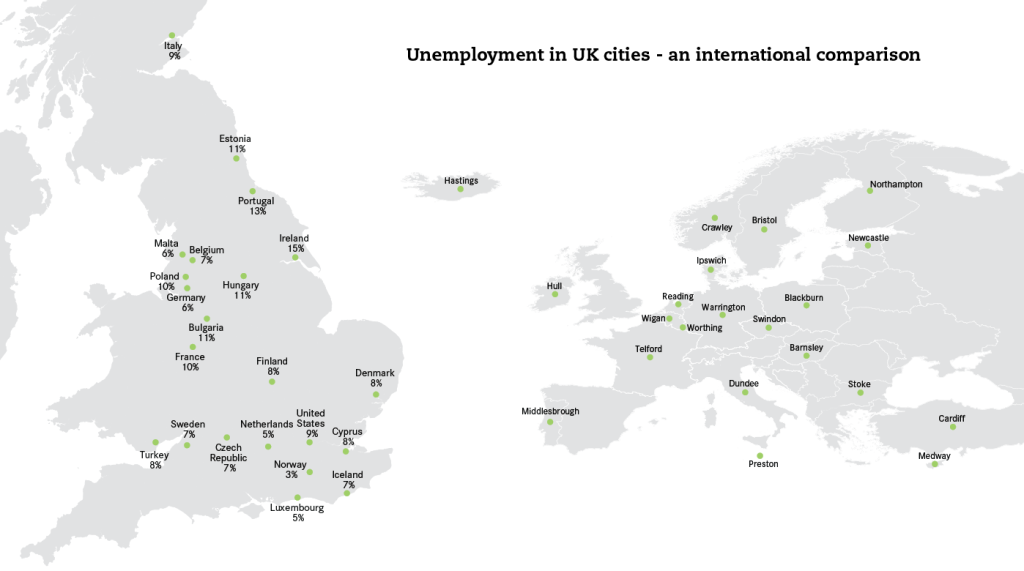 In most countries the average unemployment rates do not give a clear picture of how much unemployment varies from city to city. For example, Brookings’ latest Metro Monitor reports that less than 6% are unemployed in Boston and Washington while more than 16% are unemployed in Fresno, California. We’re not trying to suggest that individual cities are comparable to whole countries. But the map does highlight the extent to which the scale of the challenge varies across cities – and the need for policy to respond accordingly.

Unlike many other countries labour market policy in the UK is highly centralised limiting the ability of cities to respond to their particular circumstances. The Youth Contract and other employment support programmes need to go further in places like Barnsley where unemployment is still high and rising. One of the first City Deals saw the creation of the City Apprenticeship and Skills Hub in Manchester which promises to increase the number of apprenticeships available locally to 6,000 by focusing on SMEs – what might this look like elsewhere? How can cities work with employers to help maximize the impact of national initiatives?  And how can policy be better joined up at city level to support individuals to overcome the multiple barriers they often face?