Skills shortage is an issue all cities face. In a previous blog, I used data from the UKCES Employer Skills Survey (ESS) to show that all cities have difficulties in recruiting workers with the right mix of skills and qualifications. This survey also provides data on training, allowing us to see what proportion of employers in each city are using training to reduce these skill shortages and provide existing staff with new skills. You can play around with the city-by-city data from the survey on our bespoke data tool. Here are five key points on training in the UK revealed by the survey:

1. Employers based in cities are more likely to offer training than those based elsewhere.

The survey found that 66 per cent of employers in the UK have provided training to their staff over a 12 month period. In cities, this proportion is above this UK average in all but 15 UK cities, varying from 81 per cent in Plymouth to 57 per cent in Southend.

2. Employers in southern cities are more likely to offer training, with Scottish cities and Hull being notable exceptions.

The cities with the highest share of employers providing training also tend to have either a high share of knowledge intensive jobs (KIBS jobs), such as Aberdeen, Cambridge and Oxford, or a lower qualified working age population, such as Hull, Glasgow and Peterborough.

3. Yet there is no link between the share of employers providing training and the share training their workers to a high level.

Southend and Plymouth – at opposite ends of the scale in terms of overall training offered – both have similar shares of employers training staff towards level 4 qualifications, of 11 per cent and 13 per cent. And among those employers that do train towards a nationally recognised qualification, it is most common to train workers towards at least a level 3 qualification.

4. While most employers feel their staff would benefit from additional training, far fewer actually provide it.

Only 1 in 5 city employers’ give staff not needing training as a key reason for not providing more training. Yet over half of employers report they had provided the exact amount of training they wanted to over the last year and so had no desire to offer additional training over that period , defined in the survey as being in a ‘training equilibrium’. 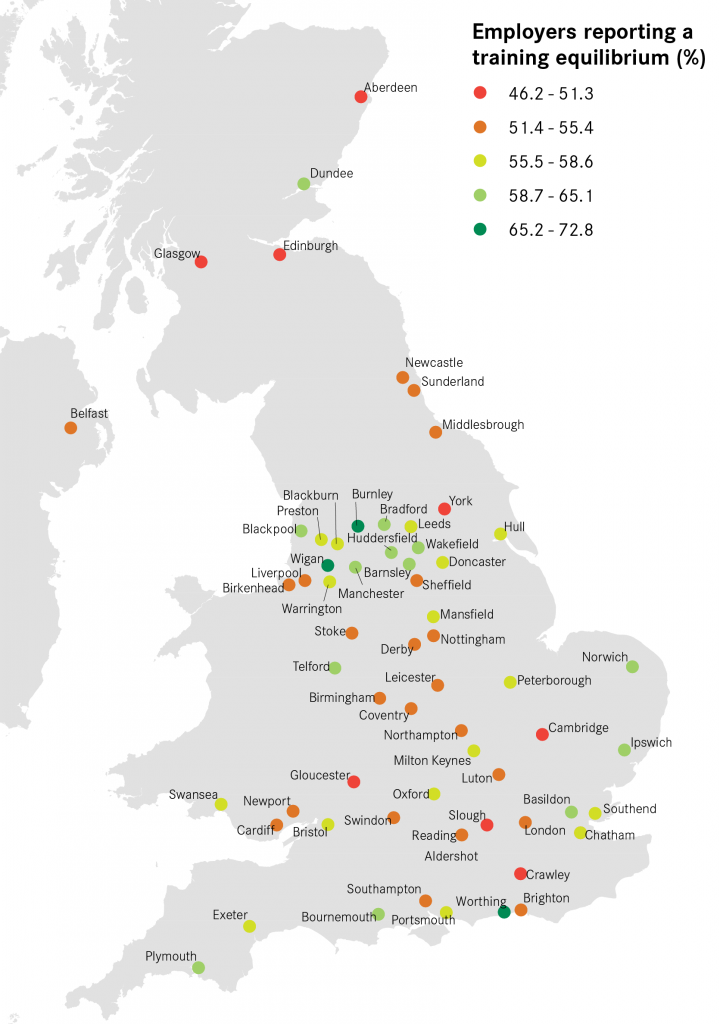 5. Cost is the main barrier to employers offering more training.

In Southend, which has the lowest share of employers offering training, no employers give the main reason they don’t offer more training as staff being fully proficient, instead reporting that they lack the funds to train more and can’t spare the time to send staff on courses.

Together, this data indicates that more employers in Southern cities have an appetite for training. But with a large proportion of employers throughout the UK listing the costs of training as a major constraint on the amount of training offered, local programmes (such as the Skills Support for the Workforce programmes) and sectoral partnerships to encourage more training will be vital. Such programmes can make training less costly for employers, either through providing funding or by pooling resources to design training programmes that met industry specific needs.