Last week we published Cities Outlook 2017, our annual health-check on UK city economies, which this year highlighted the importance of Europe as an export destination for every UK city – and which cities would be most affected by a ‘bad’ trade deal with the EU. On the same day the Brookings Institution’s Metro programme released analysis showing which US cities could be most affected by the Trump administration’s proposed ‘America First’ approach to international trade.

As the authors rightly note: “for all its national and global implications, an “America first” economic policy is also a matter of significant import for the nation’s local patchwork of cities, small towns, and rural areas. [In the US] Trade is generally regarded as a national issue, but it is underpinned by local collections of firms that often concentrate together to form industrial clusters. This means that changes in federal trade policy can have large implications for individual communities, whose reliance on trade can vary widely by dint of the tradability of their local industry mix and overall global orientation.”

What is true for the US and Trump’s ‘America First’ policy is equally true for the UK and May’s ‘Global Britain’ policy (the Government’s drive to increase exports to different counties beyond the EU), which will similarly have a major impact on cities across the UK.

In view of these relationships, it is worth examining the geography of export reliance among US and UK cities – and which places in both countries will be most affected by changes in national policy. The following two maps, using slightly different metrics, show those US cities and UK cities which are the biggest exporters in terms of volume, and those cities which are most reliant on exports as a driver of economic growth and jobs. 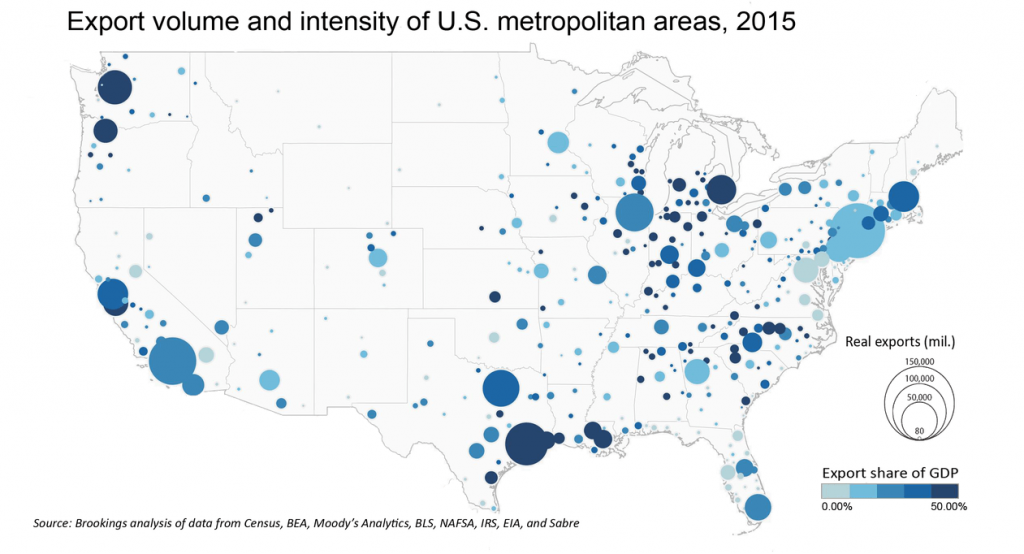 What does the US data show?  In terms of overall volume of exports, America’s big cities lead the way. New York, Los Angeles, Houston, Chicago, Dallas and Seattle are all trading giants, each exporting more than $50 billion annually in goods and services, and together accounting for 25 percent of national exports. But America’s large cities are not the places most reliant on exports as a driver of economic growth and jobs. Instead, export intensity (measured as the export share of GDP) is highest in smaller energy and manufacturing-oriented cities such as Detroit, Portland, and New Orleans. At the extreme end, over half of the economy in Columbus in Indiana is driven by exports, largely due to its machinery manufacturing cluster.

The patterns are similar in the UK. In absolute terms London is the largest contributor, responsible for 28 per cent of the country’s exports, followed by the other big cities including Birmingham, Manchester, Glasgow and Bristol. But in terms of export intensity (measured as the value of exports per job) it’s car manufacturing cities such as Sunderland and Coventry, pharmaceutical exporting cities such as Worthing and Slough, and energy and engine manufacturing cities such as Derby and Aldershot that are most reliant on exports as a driver of economic growth and jobs. 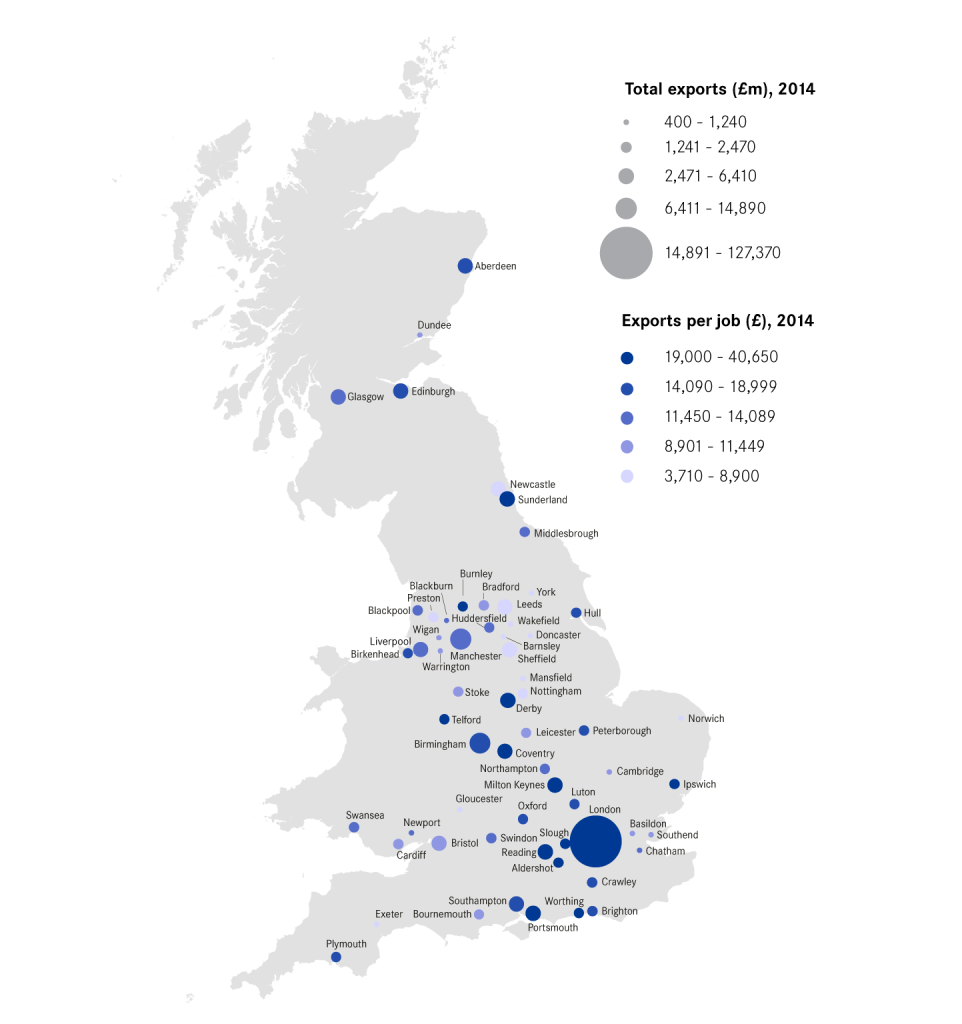 As both maps show, cities across the UK and US, to a greater or lesser degree, are connected to the global economy through international trade (and talent) flows and networks. In the years ahead, Theresa May’s attempts to create a post-Brexit ‘Global Britain’ and Donald Trump’s ‘America First’ policies will have real implications for places and people across both countries.

If, for example, Trump’s protectionist tendencies result in trade barriers with other countries, that will clearly create big problems for US cities – especially those most reliant on exports such as Detroit or Portland but it will also cause problems for UK cities. Given the UK government’s drive to increase exports to non-EU market, and the US in particular, Trump’s protectionism could also have a significant bearing on the economic prospects of UK cities such as Hull and Derby. And if Theresa May’s vision for a ‘Global Britain’ comes at the expense of an EU trade deal, the fall-out for all UK cities will be significant.

The findings of both reports should serve as a reminder for national policy-makers of the need to consider the geographical implications of national initiatives and how they will play out in different parts of their country. It also underlines the importance of having a city-based approach at the heart of domestic economic policies, such as the upcoming Industrial Strategy in the UK, to ensure it recognises the needs and challenges that different cities across the UK face.