Last Friday Centre for Cities hosted an event with the European Commission to examine the findings of both our recent Competing with the Continent report, and the Commission’s State of European Cities 2016 research.

One particularly interesting aspect of the presentation by the European Commission was their comparison of the varying degrees of autonomy enjoyed by local authorities in different European countries. In order to compare local government autonomy across the continent, the Commission has developed a Local Autonomy Index.

Unlike many other studies in this area, the index looks not only at fiscal autonomy (a field where UK local authorities are known to be weak, with currently only 18 per cent of their revenues raised locally), but also includes a number of other measures of local authorities’ autonomy, such as their policy scope, their ability to take on new tasks, their effective influence on policy delivery and the legal protection they benefit from. 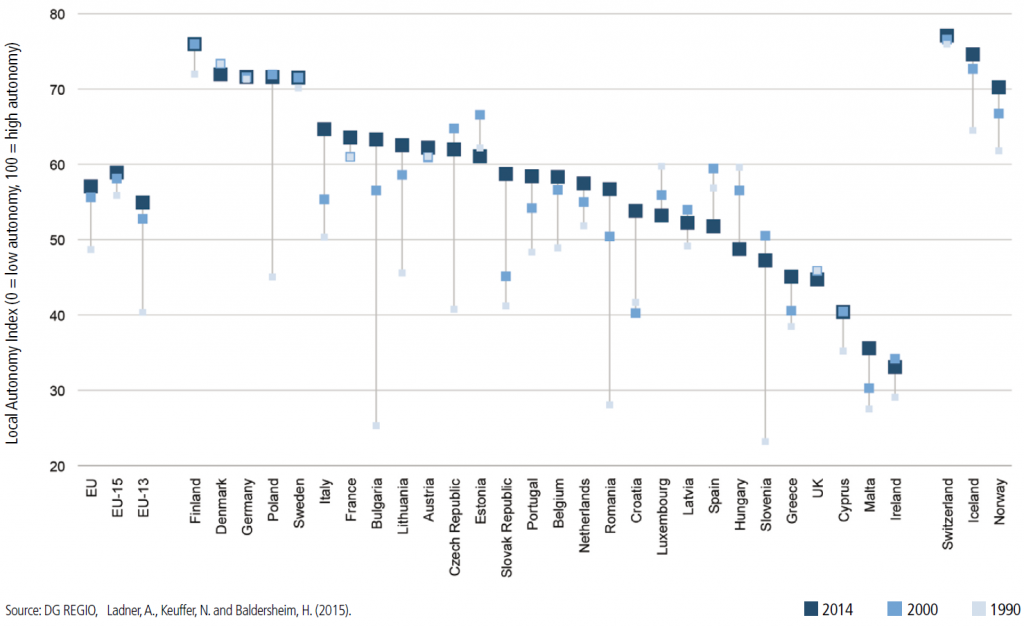 For anyone with a passing knowledge of UK local government, it will probably come as little surprise that local authorities in the UK have relatively little autonomy compared to their European counterparts – ranking as the 4th least autonomous authorities out of 28 EU countries, with only Cyprus, Malta and Ireland home to less powerful local government. To illustrate this point further, UK local government scored 44.7 on the Commission’s index (the closest to 100, the more autonomous) – far below Nordic countries (with Finland and Denmark ranking highest on 75.9 and 71.9 respectively), Germany (71.6), Italy (64.7) and France (63.5).

Given the poor economic performance of UK cities compared to European counterparts, as shown in our Competing with the Continent report, this inevitably leads us to question what impact the relative lack of autonomy that UK cities enjoy has on their local economies. The answer to this question, however, is not straightforward, as the abundant literature on the potential correlation between decentralisation and economic growth tends to give various and potentially conflicting results.

But what is clear is that granting UK local authorities more of the powers that their European counterparts already enjoy would give them the chance to make decisions that better reflect the needs of local people and economies. It would also ensure cities have stronger incentives to invest on the key drivers of growth, such as skills, transport and housing. That will be crucial in helping UK cities start to address the productivity and skills gaps which are causing many of them to lag behind their continental rivals.