Yesterday a High Court judge ruled that the Government’s plan to tackle air pollution is “unlawful”, and that it must do more to improve air quality across the country. In particular, the judge stated that the Government should introduce legal requirements to force places which have illegal levels of air pollution to take action, rather than simply encouraging them to do so.

As our recent briefing ‘How can UK cities clean up the air we breathe?’ showed, this problem is largely an urban one, with cities home to 88 per cent of roads which are predicted to have concentrations of NO2 above legal limits. It’s clear, then, that the high court ruling this week will have big implications for cities across the country. 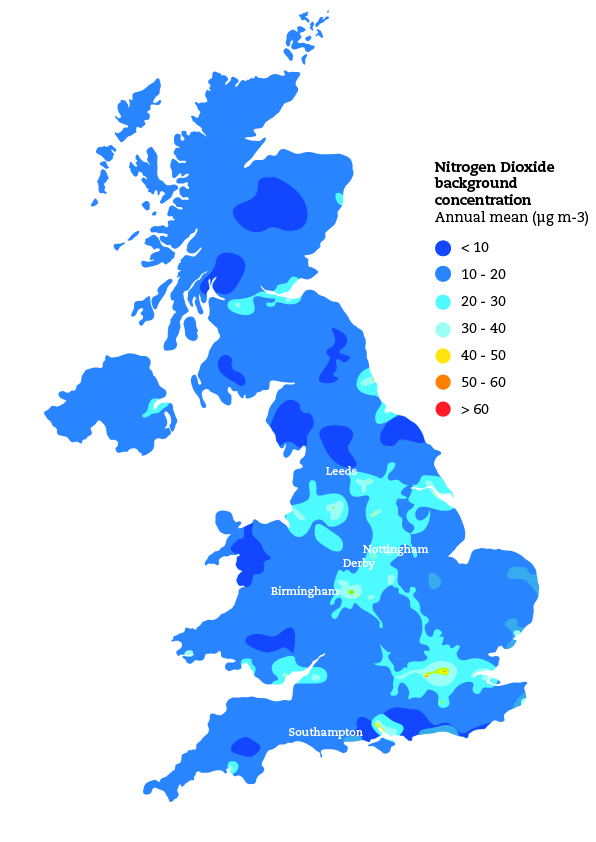 As the judge’s ruling suggests, the Government’s approach to tackling these problems has been to urge local leaders in the most affected areas to act, without to forcing them to do so. In total, it has mandated 28 mostly-urban local authorities, as well as the Greater London Authority, to develop local plans to tackle local pollution problems by the end of this year. They have also been tasked with considering the best options to achieve statutory NO2 limit values within the shortest possible time.

However, the court case this week should signal a step change in this process. Indeed, the Government’s response to the case was instructive, conceding that while it had previously taken a pragmatic, less formal approach “to encouraging places to act”,  it will now “take a more formal line with them”. In other words, UK cities will have to take urgent action to address their pollution problems, or risk facing legal sanctions.

The good news is that cities have the powers and resources they need to start to take action. Our recent briefing set out steps that cities across the globe are taking to address their pollution problems, many of which could be replicated in UK cities – from Milan’s congestion charge, to Paris’s restrictions on car usage and New York’s laws against idling. Moreover, the Government has made around £445 million in funding available to local authorities to fund such measures.

Unsurprisingly, London – which is home to the highest levels of pollution, but which also holds the most extensive devolved powers of any UK city – has led the way in terms of tackling air quality problems. That includes the launch of the congestion charge in 2003, and the ‘Toxicity Charge’  (or T-charge) which the current Mayor Sadiq Khan introduced in October last year.

Other cities are also tentatively starting to take steps to address these problems. Sheffield, for example, was one of the first places to launch its Clean Air Strategy, which features plans to replace existing buses with more environmentally friendly stock, and for anti-idling zones in front of schools. Cambridge is considering options for a congestion charge, while Oxford is examining the feasibility of introducing zero emissions zones.

However, for the most part, there has been a reluctance among city leaders to take the tough and potentially contentious decisions needed to improve air quality, and in particular to tackle the single biggest factor causing pollution – car usage.

This was illustrated last January when Centre for Cities published its three policy recommendations for the incoming metro mayor of Greater Manchester. One of the ideas we put forward was that the new mayor should introduce a congestion charge in Manchester city centre in order to reduce pollution and generate more funding for public transport. However, the idea was flatly rejected by all the mayoral candidates standing in the city region, perhaps reflecting the negative response it had provoked in local media. Similarly, while Sheffield’s clean air strategy features some good ideas, it also explicitly rules out any measures to charge private car-users, again reflecting an awareness that such measures might be unpopular.

But the reality is that to get to grips with air quality problems (and all the associated issues they bring, from poor health outcomes to environmental damage) cities need to take difficult decisions – even if that means going against popular opinion.  Following this week’s court ruling, they might not have the luxury of stalling on these issues any longer.