In November 2017, out of the ashes of a previously agreed North East deal, Newcastle, North Tyneside and Northumberland signed up to a smaller and more limited devolution deal. It set out plans to put more money, decisions and influence into the hands of local people.

The date for the first election is set for May 2019. As polling day approaches the political parties have begun picking their candidates – on Wednesday Labour selected Jamie Driscoll. Here we look at the three things all challengers should have front of mind as they draft their manifestos:

The region offers huge attractions for many people. Newcastle is one of the most affordable major cities for housing on local wages and commuters suffer less of the peak time congestion faced elsewhere. But rather than being a benefit, these are a symptom of local wages, skills levels and employment rates in the city-region that fall below the national average. As the chart below shows, wages are £2 per week lower in the city than the national average and the percentage of the working age population with no formal qualifications is 0.4% higher.

Cities should be outperforming the national average, not trailing it, so this is where candidates should devote their attention. Increasing residents’ skills across the board will be central to improving their ability to progress into and in work. From those still in education through to those already in work, the mayor should push to deliver a system of lifelong learning in the North of Tyne. It will also increase the areas attractiveness to the high skilled firms needed to drive future economic growth.

Any skills plan should have a clear sight of the impact of automation and globalisation on the local economy. The rise of the robots or AI to carry out routine tasks means that employers are looking for different range of skills, softer, interpersonal and analytical skills. The candidates should recognise that their skills policy needs to be robot-ready and prepare local workers in the city-region for the future.

The devolution deal signed with the Government makes clear that improving schools and skills is the primary ambition of the councils involved; this is absolutely the correct focus. Work is already underway and is aligned to and predates Centre for Cities’ calls for metro mayors to create skills compacts. Any prospective mayor should understand these plans and how they take them further.

The Centre for Cities definition of Newcastle’s economic impact is not limited to the north banks of the Tyne. Gateshead and South Tyneside are an integral part of a single built-up area with one functional economy. More than one in three of Gateshead’s residents commute to work North of the Tyne, as do 18 per cent of those in South Tyneside.

But while residents in these areas will have a material interest in the policies of the mayor, they will not have a say in May’s election. Despite this being less than ideal, Centre for Cities welcomed the North of Tyne deal as a victory for pragmatism over perfection. However, from day one, the incoming mayor should work as closely and collaboratively with partners across the Tyne to develop a joined-up economic policy that reflects how people live their day-to-day lives crisscrossing the river.

If successful, this may even prove the worth of the mayor to south of Tyne leaders, and the importance of having a say over who holds the job, by the time of the next election in 2024.

3. But beware the limitations of metro mayors’ powers

As we have seen in other city regions, a North of Tyne mayor, elected with 100,000-or-so votes, is likely to become the voice of the entire city-region to the government and media.  Most voters are unlikely to check the exact division of responsibilities for local public services and they will expect the mayor to fix problems outside of their control.

While mayors have informal ‘soft’ powers to convene, cajole and sometimes castigate local and national partners, their ‘hard’ powers are still limited and funding relatively small compared to the budgets of local authorities.  In fact, the North of Tyne mayor has even more limited powers than other metro mayors, lacking powers to franchise buses or lead on city-region transport as enjoyed elsewhere. 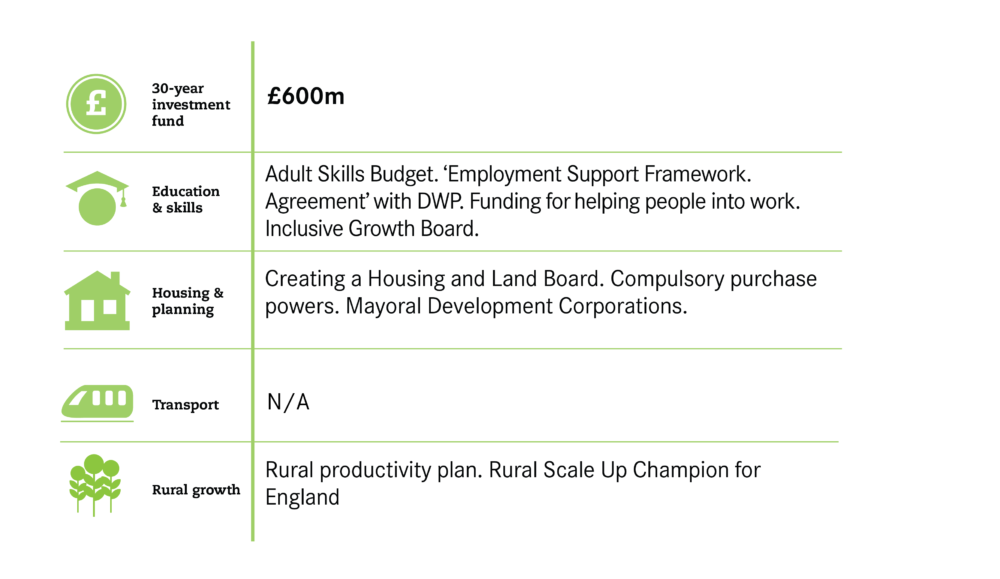 The candidates should, therefore, avoid the temptation to make big promises on popular public concerns that they don’t have the formal power to deliver on, such as ending rough sleeping. While they can use informal influence to make changes in areas such as this, as Andy Burnham has shown in Greater Manchester, they should not stake their mayoralty around them.

Instead, candidates should prioritise improving the outcomes of the things they do have control over. This means improving skills and helping people into work as set out above, and leading on strategic regeneration projects and transport infrastructure improvements. This will be a challenging job on its own.

The North of Tyne deal is a chance to get started on dealing with the significant challenges the region faces. It’s up to candidates now to set out how they will grasp that chance.

Levelling up Mayors
Levelling up Productivity
Is GDP a good measure of wellbeing at the local level?
Housing Levelling up
City centre regeneration shouldn’t focus on housing