The surprise victory of Donald Trump in the US presidential elections this week has prompted much soul-searching among the country’s shell-shocked liberals, who will be trying to make sense of a result few predicted for some time to come.

Having won on a platform of anti-immigration, protectionism and anti-globalisation (not-to-mention open racism and misogyny), it’s no wonder that some commentators have viewed the Trump victory as signalling the death-knell for what are often derided as liberal-metropolitan values – same sex marriage, free trade and tolerance of people from different religious and cultural backgrounds.

Certainly, most of America’s city dwellers now face at least four years under a President they didn’t vote for. Exit polls suggest that Hillary Clinton won 59 per cent of the vote in all cities with a population of over 50,000 (compared to 35 per cent for Trump), and that 31 of the 35 largest US cities polled strong majorities for Clinton. In contrast, Trump gained 62 per cent of the rural vote across the country (compared to 34 per cent for Clinton), with residents of small towns and rural places swinging the election in his favour in key states such as Wisconsin and Michigan.

However, while it may be hard for America’s urban liberals to appreciate right now, in truth the election of Trump will have less bearing on their day-to-day lives than they might think. Thanks to the US’s heavily-devolved system of government, large areas of domestic policy will remain in the hands of local leaders at city and state levels, which the President will have little sway over.

Indeed, city mayors and state governors will continue to have significant powers over education, social issues, investment, taxation and economic development – even if trade and immigration policies move in directions opposite to their interests. As such, Democrats in places like San Francisco, New York, Chicago, and Philadelphia can take some comfort from the fact they will to a large extent be insulated from many aspects of Trump’s policies.

In Britain, urban and rural residents are just as polarised as in the US. For example, in the EU referendum earlier this year, all but one of England’s biggest cities voted to remain in the UK, putting them at odds with the majority-vote gained by the Leave campaign under the banner of “taking back control”. The urban vs rural voting pattern was also evident in the 2015 general election, with the map of voting patterns illustrating that the Labour Party won a majority of votes in nearly all of England’s major urban areas. 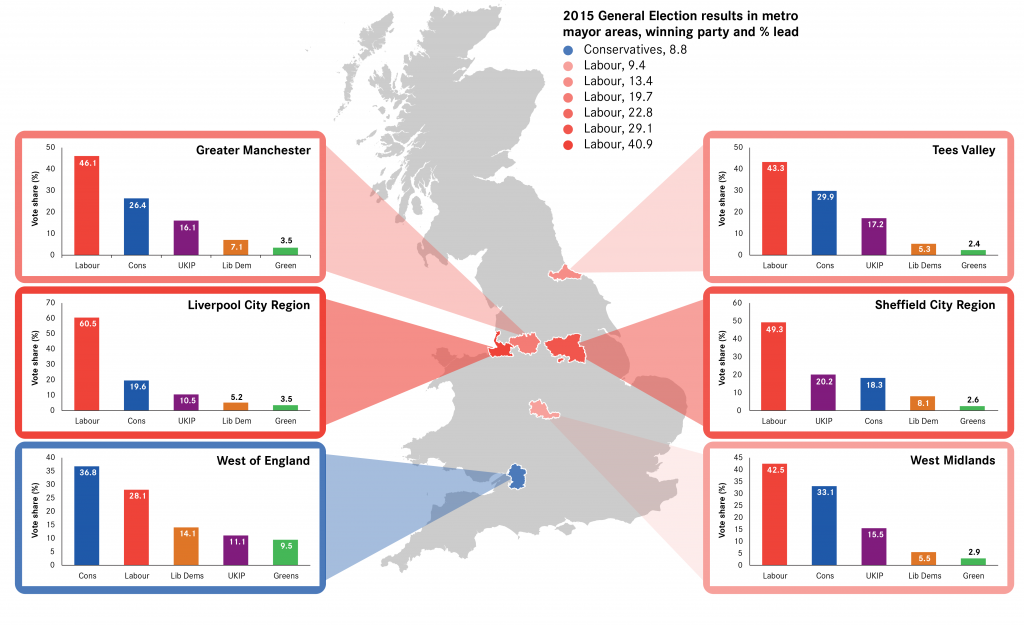 But unlike America our deeply centralised system of governance means that by securing a majority at the national level, albeit a very small one, the Conservatives also gained control over virtually all the public institutions that shape the everyday lives of people living and working in cities. Compared to the American counterparts, city leaders in Britain have very little control of the issues and budgets that matter to the lives of their residents.

The lesson from Brexit, and from this week’s events across the Atlantic, is that for those of us who do subscribe to the values of metropolitan liberalism, the best hope we have of putting those values into practice, and influencing the decisions that matter most to our day-to-day lives, is to push for the devolution of more powers to our cities.

In recent years, we have seen good progress in addressing the overly-centralised nature of governance in Britain.  Through the devolution agenda introduced by the former Chancellor George Osborne and the current Secretary of State for Business Greg Clark, in May 2017 we will see the introduction of metro-mayors in most of England’s biggest city-regions – a significant constitutional moment in the country.

As the process for electing these metro-mayors gets underway in the new year, the onus will be on city dwellers to actively engage with the would-be mayors to ensure they both reflect their values and to push them to prioritise seeking more powers from national government as a matter of urgency. Only by getting fully behind the devolution agenda can urban liberals hope to “take back control”.