There’s no denying the Scottish Referendum has well and truly given Government and Whitehall a wake-up call. With a 10 per cent margin of 55 to 45 percent, the loss of the 307 year old union was a very near possibility.

That margin, though, does not mean that Scotland will accept the status quo either. Politicians have already acknowledged things will need to change, with Scotland gaining more control over its own destiny. The challenge for Westminster, though, is that these sentiments are not limited to North of the border. In many other parts of England, calls for greater powers and funding have been growing at a steady pace over many years.

Centre for Cities’ research conducted earlier this year by YouGov polled 16 cities in the UK – including Glasgow – on their perceptions of London and its perceived economic, political and cultural dominance.

It found that 64 per cent of UK adults outside London felt the location of Whitehall and Parliament in the capital means political decisions are too focused on London in comparison to the rest of the UK. This sentiment was most pronounced in Leeds (79 per cent), Sheffield (79 per cent) and – unsurprisingly given today’s result – Glasgow (78 per cent).

Similarly, only 17 per cent of UK adults outside London think that Whitehall and Parliament are responsive to the issues in the city / town where they live. In Glasgow, that number was 9 percent, but it was 8 per cent in Liverpool and 7 per cent in Sheffield. 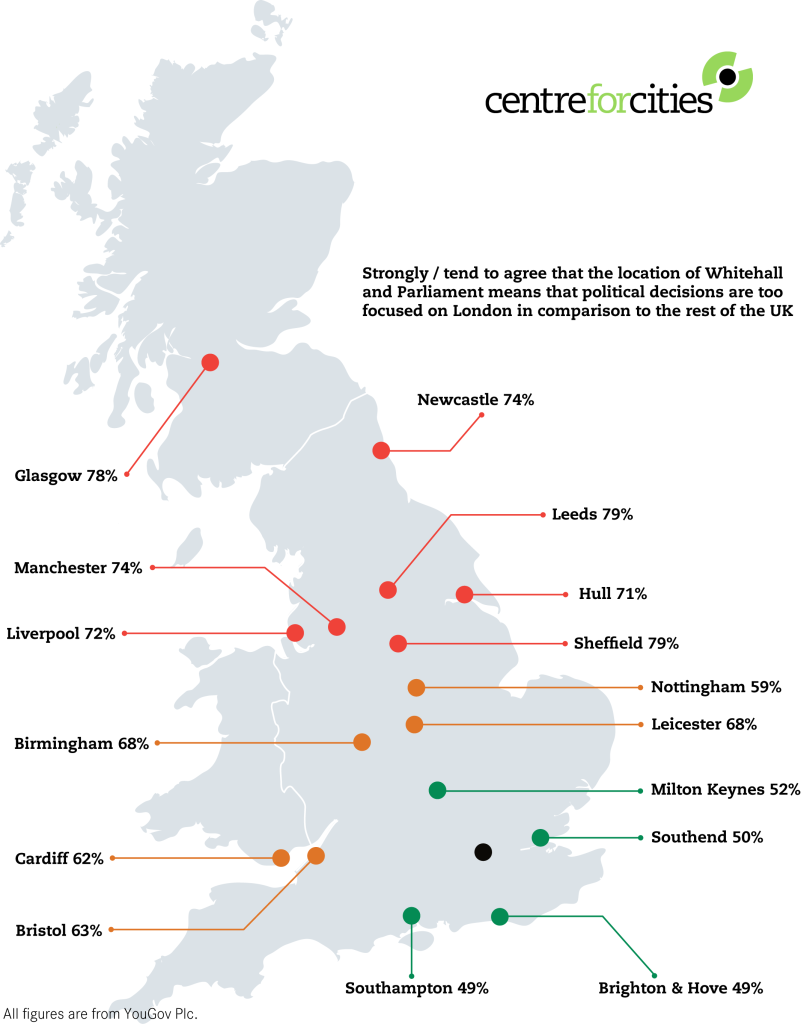 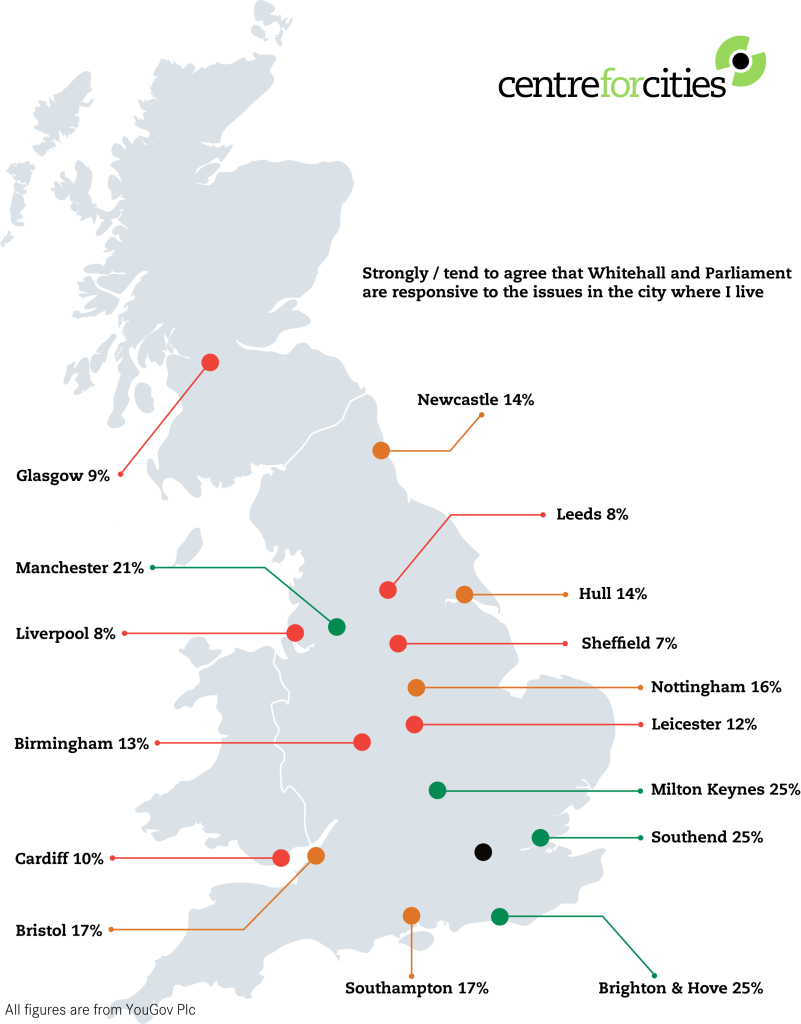 The dissatisfaction with Westminster that has bubbled to the surface so ferociously during the Scottish Referendum is not limited to Scotland. Indeed, residents of Liverpool and Sheffield share the sentiments of being far removed from Whitehall and being disappointed with the performance of their National Government. These cities do not feel that the Government is working for them, nor their local economy.

In fact, Glasgow has more in common with larger English cities, particularly those in the North, than with other parts of Scotland. Larger cities have shared and specific challenges in building efficient transport, getting people in to jobs, and providing enough housing, and they can achieve more by working together, learning from one another, and sending Government a common and clear message that more power is needed in our city regions.

So what can be done? A combination of local and national leadership will be needed to fill this gap, with Westminster committing to more flexibility for places to decide what is best for them.

This point is best seen in Manchester, where survey respondents were more likely to say that National Government was responsive to their local needs than most cities, certainly most Northern cities. Manchester’s recent City Deal and the continuous growth of its tram network, for example, demonstrate how city leaders have worked alongside Westminster to drive change and support the local economy. The city is benefiting from a combination of strong city-level leadership, working between 10 local authorities, as well as the additional powers and funding the city has received from National Government, which have driven additional investment and growth.

Just as London’s strong performance has been supported by its unrivalled level of devolution, so too has Manchester thrived – and could continue to grow even further with additional powers. Greater flexibility and control has built stronger local economies, enabling these cities to contribute more national growth, and made their residents happier and more satisfied citizens.

If, as our research shows, so many English cities feel Westminster is failing to meet their needs and represent their interests, then the lesson of this close call in Scotland must be to open up new discussions about devolution – not just at a national level, but to the cities with the capacity to drive future economic growth.