There are 30 million commuters in the UK; their journey to and from work takes up a fair chunk of their waking life. The quality of that journey affects where they choose to live, the jobs they apply for, the wages they earn, and the amount and quality of time that they can spend with family and friends outside of work.

How people travel in cities is also of growing concern to voters increasingly aware of the environmental and health damage that high levels of car use cause. A lack of affordable and reliable public transport is a hallmark of the ‘left-behind places’ debate.

Understandably national politicians and party manifestos talk about HS2 and Northern Powerhouse Rail, but the vast majority of journeys are made within cities so urban transport promises should not be forgotten. These should focus on pushing powers and funding away from the Department for Transport and Treasury into the hands of mayors and city leaders.

Here’s what the parties’ manifestos should say on transport that to attract voters, investment and cities:

There is no conceivable reason why London alone should benefit from a level of control over its transport system that is unremarkable in any other European city but absent elsewhere in the UK.

The Mayor of London wields power over buses, tubes, trains, bikes, key routes and more to ensure that the flow of people around the city continues even as numbers of travellers grows. Plans for where new homes, offices, and retail space is built are made in co-ordination with transport planners. This has helped London to reap the economic benefits of population density, like more jobs and higher wages, and partially limit the downsides – congestion, pollution and high prices.

This difference is most stark on the most important mode of public transport in the UK: buses. In London, the Mayor sets the fares, frequency, routes and quality of services in the capital, while private operators run the journeys. Under this system, journeys have doubled in the last 30 years, while in other major cities it has halved.

Metro mayors now have the power to franchise services through the Bus Services Act 2017. All political parties should commit to supporting mayors to use these powers with a £50m fund to prepare the business case for introduction. Dozens of towns such as Rochdale, Rotherham and Hartlepool sit within metro mayor areas and will quickly benefit from TfL-style buses.

Bus franchising powers should be open to all cities with or without a metro mayor as argued in Centre for Cities’ most recent report, Delivering change — improving urban bus transport. 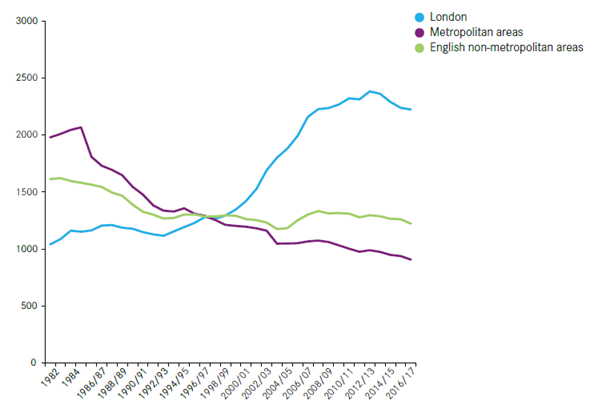 TfL also enjoys long-term funding for capital investment, worth around £1bn a year for the next five years. This lets the city plan and procure infrastructure improvements efficiently and effectively.  In comparison other cities must survive on funding set year by year, making it difficult for them to make long-term infrastructure plans.

To counter this the National Infrastructure Commission called for five-year budget settlements for cities to maintain and improve existing transport infrastructure, rising to over £5 billion a year by 2040. All parties should commit to delivering this recommendation.

HS2 and Northern Powerhouse Rail look set to cost almost £140bn before services start running in 2035 at the earliest. These schemes will serve the centres of some of the UK’s increasingly congested cities, such as Manchester, Birmingham and Leeds.  In these city centres, the local public transport networks are already heavily congested, limiting the pool of workers and businesses who can locate there. 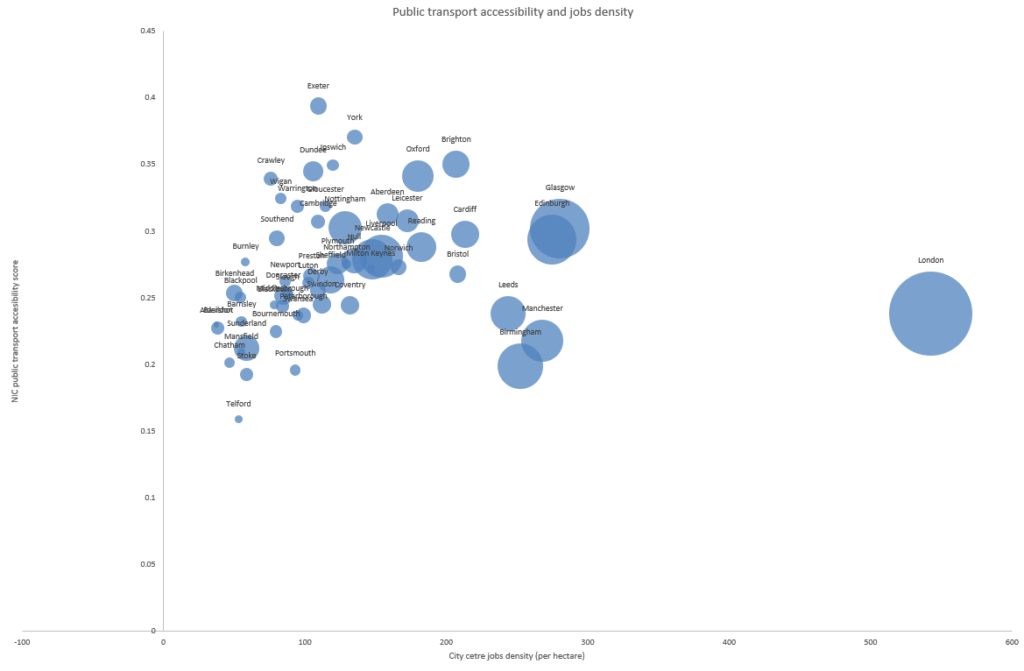 TfL-style powers including control over buses will help them to manage the existing roads, buses and trains more efficiently to support more businesses to locate in the city centre and more residents to access them.

But just as London has relied on new schemes like the Docklands Light Railway, Jubilee Line Extension and soon Crossrail to continue to grow, so will these cities. All parties should commit to providing cities with £32bn funding up to 2040 as recommended by the National Infrastructure Commission to invest in new intra-urban transport infrastructure – from bus rapid transit, trams, trains and underground tunnels. Failure to do so will limit growth just as these city centres have begun to deliver the growth that will help to rebalance opportunity and productivity across the country.

This fund should be open to any city for any scheme that can raise 25 per cent of the funding locally, without bidding against other areas. But this 25 per cent should come with one condition, set out below.

Force cities to get serious about tackling congestion

In funding these major schemes, government should force recalcitrant cities to introduce road pricing. Multi-billion-pound schemes to invest in new trains, trams or tunnels in congested cities should not be a way to avoid tackling the major cause – scarce and under-priced city centre road space.

The costs to national government of air quality-related health problems and stunted economic growth are too important for them to take a back seat. But despite warm words, actions by cities to tackle congestion and poor air quality have been weak outside of London, Nottingham and a few others. This is too important an issue for any incoming government to allow to fester.

Politicians should be clear that tackling road congestion in city centres is a nationally important issue, for the economy, climate and health. Every major city that accesses the £32 billion fund should be required to fund the large part of its 25 per cent contribution from schemes to cut congestion – a simple congestion charge, road pricing or parking levies.