In May 2017, the residents of Tees Valley will vote on a Metro Mayor, but beforehand the various candidates will need to set out a strategic vision for the city and the policy priorities required to achieve it. To help inform this process, we commissioned a ComRes poll of 300 adults in the city region to find out what their priorities might be.

The economic challenges for Tees Valley have received significant focus from the Government and the media over the last year, due in part to the closure of the SSI steel plant near Redcar, highlighted last week by Lord Heseltine’s report.

As a result, supporting businesses to create more jobs, and residents to access them, will be among the key focuses for the new Mayor. Lord Heseltine’s report and the South Tees Development Corporation both agree that the key to this is education and skills.

Our previous research has also highlighted the importance of skills for economic growth for cities in the long term, and why this is a particular concern for the Middlesbrough city region, which is ranked in the bottom third of cities for qualification levels in the UK.

Moreover our polling found that this is a concern shared by the public, viewed as second only to investing in the transport network for the Mayor’s priorities upon taking office: 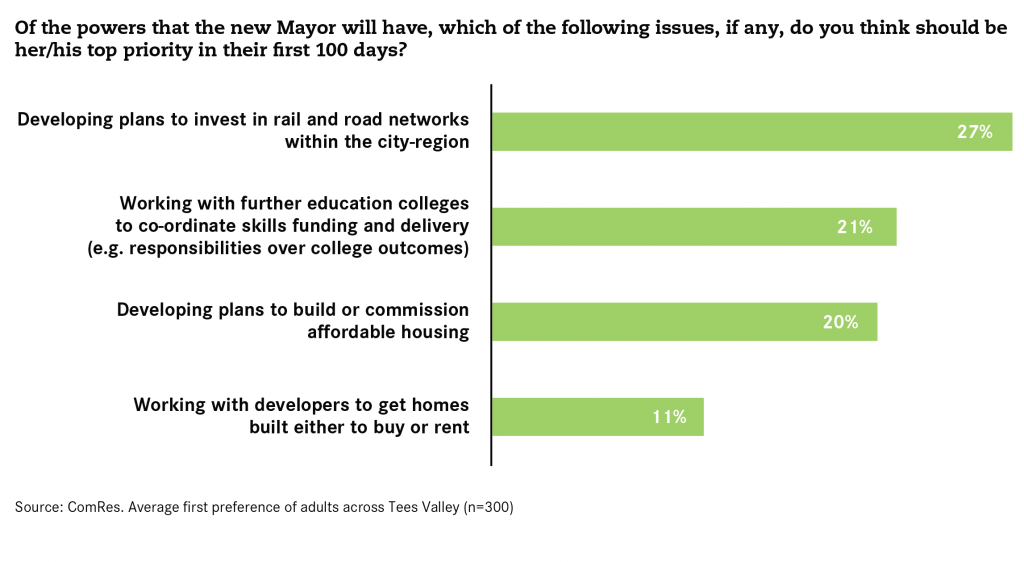 In order to ‘get things done’ and make the most of the powers at their disposal, the new Mayor will also need to work alongside and be supported by local council leaders, who will make up the combined authority’s cabinet. Getting the balance of powers right to ensure effective city region leadership will be vital – our survey found that more than half of adults want the Mayor to have greater powers than local council leaders:

It’s clear, then, that the Tees Valley faces significant economic challenges in the years ahead, but whoever becomes the area’s first Mayor in 2017 will have a significant mandate to act. He or she will have to take full advantage of that mandate, as well as the formal powers at their disposal, to deliver on issues such as skills and transport which will make the biggest difference to people living across the city-region.

We will be discussing the priorities for the new Mayor of Tees Valley at our event in Middlesbrough tomorrow evening (Tuesday 14th June). For more details and to sign up, click here.