Today is Clean Air Day, and leaders of the UK’s 14 largest cities (all of which have illegal levels of air pollution) have marked the occasion by calling on the Government to do more to address these issues. In particular, the mayors have called for the Government to accelerate its proposed ban on diesel and petrol cars by a decade (which would mean phasing out these vehicles by 2030), and to introduce clean air zones across the UK and a scrappage scheme to help car owners replace their high-emission cars.

This focus from city leaders is welcome, given that air pollution is primarily an urban problem. As highlighted in our recent briefing ‘How can UK cities clean up the air we breathe?’, UK cities are home to 88 per cent of roads which are predicted to have concentrations of NO2 above legal limits. The main culprit is unsurprisingly road transport, and in particular diesel vehicles, which are responsible for 80 and 35 per cent of NO2 roadside concentration respectively. 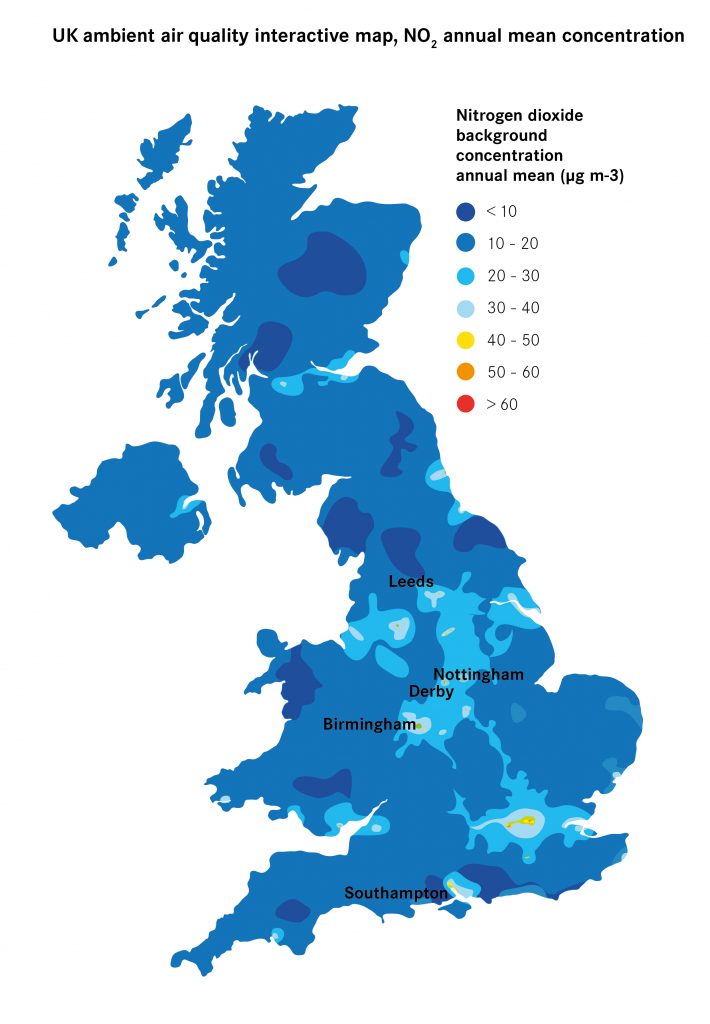 As such, while national government policies to tackle air quality problems are important, the onus is on cities to address these problems – and we’ve already seen progress on this front in recent years. London, with its greater devolved powers, has been leading the way – historically, with the launch of the congestion charge zone in 2003, and more recently with the introduction of the Toxicity charge (or T-charge). In addition, Mayor Sadiq Khan recently confirmed a forthcoming expansion of the ultra-low emission zone to North and South circular roads.

Other cities are also catching on. Sheffield was one of the first places to launch its Clean Air Strategy, including plans to replace existing buses with more environmentally friendly stock. Leeds is due to introduce a new fleet of low-emission buses and Greater Manchester’s metro mayor Andy Burnham, wants to accelerate the timeline for achieving carbon neutrality ahead of the national commitment of 2050.

However, most UK cities could do more to cut carbon and drive efficiency, using the powers at their disposal, in particular with regards to the single biggest contributor: car usage. And with the Government having mandated 28 local authorities across 12 cities to develop plans to clean air plans (due at the end of this year), city leaders need to act soon.

Our clean air briefing highlights a number of approaches championed by cities across the globe, which UK cities could also adapt to tackle air pollution in their area:

In Paris, a sticker system is used to restrict vehicle access into city centres. Vehicles are split into six categories, depending on how heavily polluting they are according to European emissions standards, and the most polluting have been banned from the city. Moreover, any vehicle can be refused entrance in response to high levels of pollution on a given day. To mitigate adverse consequences and to encourage low-pollution transport, the city makes public transport free during these periods.

In a similar vein, New-York City introduced an anti-idling law in 2009 to reduce unnecessary emissions from idling vehicles parking or stopping. In particular areas, it is forbidden to idle in a vehicle for longer than three minutes while parking, waiting or stopping. This is even stricter around schools, where the time allowed is just one minute.

Barcelona and Copenhagen have both adopted approaches to promote cycling and walking. Barcelona’s urban mobility plan focuses on the idea of superblocks – the idea of redirecting traffic in grids around small neighbourhoods, with space within these superblocks dedicated to pedestrian and cycling public space. Through this, the city hopes to shift preferences from driving to walking and cycling.

Similarly, Copenhagen has invested in infrastructure to make cycling easier, faster and safer, thus achieving its goal to become the best cycling city in the world. Policies include set requirements for bike space per employee for commercial buildings, and bike parking space for residential developments. There are also cycling superhighways connecting the suburbs and inner-city areas, and large areas of the city centre are closed for motor vehicles.

Milan is one of five cities across the world which has introduced congestion charges in their central area. The €5 tax is charged between 7.30am to 7.30pm. In addition, vehicles entering the area must fulfil a minimum emission standard and diesel vehicles must be equipped with a particulate filter. Electric vehicles have free access and hybrid cars are exempt until a set date. The profits are used to reinvest in policies that promote sustainable mobility and reduce air pollution.

Implementing these ideas in UK cities will not necessarily be easy, as suggested by the response among politicians in Greater Manchester when we proposed a congestion charge in the city region.  But as places finalise their clean air strategies, they will need to take tough decisions to get to grips with pollution and the associated health and social problems it brings – and that may mean going against the grain of popular opinion.