The decision by London Mayor Sadiq Khan to reconvene the London Finance Commission and task it with delivering a ‘beefed up set of devolution proposals’ for fiscal devolution is the right one.

The original Commission, chaired by Professor Tony Travers (he has been asked to head up the next one too) and which ran from July 2012 to April 2013, proposed a set of reforms that included devolving the full suite of property taxes to London (including the power to set rates, bands and discounts) as well as freedom to introduce new smaller taxes.

Of the property taxes that the Commission originally proposed, devolution of business rates is already on the books – although places will not have full freedom to set rates. So what are the key issues for the reconvened Commission to be thinking about today? Here are just three commissioners will have to grapple with.

1. How to deal with London within a national system

The proposals of the original Commission sought to give London more tax freedoms, without putting the rest of the country at a disadvantage. London generates a third of the country’s taxes, a contribution which has become more important over the past decade. The big question that the commissioners will need to address is how to operate a system which provides London with greater incentives and control (and therefore responsibilities), while at the same time not being seen to diminish the significant contribution that the capital makes to the national finances and therefore to public services in other parts of the country.

One way of doing this could be to take London out of certain national tax streams altogether, in exchange for taking on full responsibilities for the delivery and funding of a specified range of public services. Or, less radical, to advocate for London to retain a higher share of the uplifts from growth. This would create stronger incentives to grow the tax base further and benefit both the national exchequer (it would in effect collect a smaller share of a larger tax base) as well as London’s own finances.

2. How to create good incentives for growth

The growing consensus all across the country that more fiscal devolution would be a good thing is positive. But the success of devolution rests in the detail of how it is implemented and specifically, the nature of the incentives it creates. The devolution of business rates raises questions about the merits of rewarding growth in commercial floorspace alone, and the system as it stands does not necessarily reward local authorities for supporting new and existing businesses to grow their workforce or increase productivity. Such a mechanism will not reflect the fact that for the long-term future of many city economies, a small firm of high-knowledge workers might be more desirable than a large out-of-town shopping centre.

In London, incentives should be focused on encouraging city leaders to tackle the costs of economic success, such as expensive housing and congestion, in order to keep the city attractive to as many firms and workers as possible. For instance, devolving stamp duty – which the first London Finance Commission called for – would significantly sharpen the incentive to build (or permit) new homes than is currently the case. The case of Oxfordshire LEP (an area where housing is also expensive and in high demand) highlights how devolving stamp duty could boost incentives in London: if stamp duty were devolved it would increase the financial incentive to local leaders in Oxfordshire LEP from £14 for each new home built (New Homes Bonus system) to between £66 and £75 per resident if the LEP’s housebuilding targets were met between now and 2031. 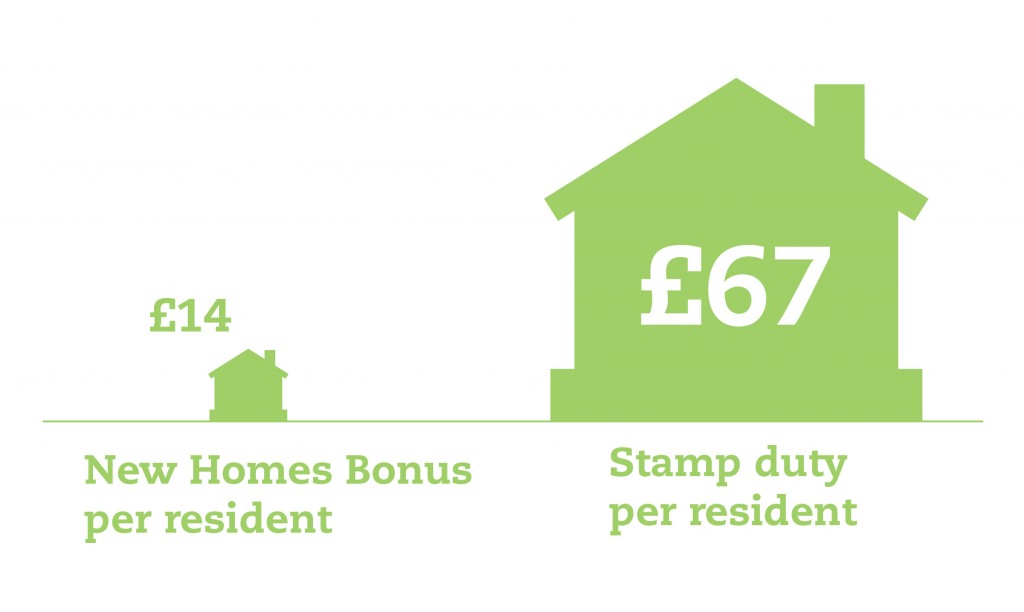 3. What should the relationship between powers held at mayoral and borough level be

Finally, how these incentives will play out between the Mayor, the Greater London Authority and the boroughs is important. As it stands, control over the capital’s finances is split between the different layers of government in London. Boroughs retain the council tax that is generated in their area, as well as any locally levied fees and charges. Of the 50 per cent of business rates revenues they keep (the other half goes to Government), 40 per cent goes to the GLA. The GLA in turn has the power to levy a precept on council tax raised in Greater London, a supplementary business rate (which funded Crossrail), and the Mayor will soon be able to levy an additional 2 per cent on business rates to fund infrastructure projects.

Any new incentives that the London Finance Commission considers should be applied at the level at which decisions are made. The London plans sets out strategic planning goals for the city but if individual planning decisions are made by councils, they would need to see a significant share of the reward from retained stamp duties for the incentive to work in the example outlined above.

Commissioners have a difficult task ahead of them: recommendations for reform will need to be pragmatic and measured in order to be deliverable – and they must move us beyond the excellent first report of the original London Finance Commission.

But the combination of devolution being higher up the political agenda than ever before and the new challenges created by Brexit provide a unique opportunity to further develop proposals for further fiscal devolution. With Devolution Deals ongoing and new metro mayors for combined authorities to be elected next year, these recommendations will be relevant to other big cities around the country too. Keeping the capital open for business has never been more important, not just for London, but for the national economy and public finances as a whole. And this means giving London’s leaders more control over the levers of growth.