The Chancellor’s 2014 Autumn Statement included several announcements on employment and skills, with a focus on support for young people:

By far the biggest skills and employment investment announced in the Autumn Statement is the abolition of employer NICs for young apprentices (to come into effect in April 2016).

The focus on increasing the number apprenticeships available to young people is welcome and evidence from past evaluations of wage incentive or subsidy programmes suggests that, while there is likely to be significant deadweight and displacement of older workers, the NIC cut will have a positive impact on participation rates among young people.

Youth unemployment is a structural problem resulting in part from fewer opportunities for young people to get a foothold on the career ladder. It’s a particularly significant problem in cities like Belfast and Hull, where the youth claimant rate is twelve times the rate in Cambridge and Oxford.

To bring youth unemployment down past pre-recession levels, national and local partners need to work together to create new pathways into work and apprenticeships The best known model to ‘earn and learn’ should be at the centre of these efforts.

An unprecedented number of people are now in apprenticeships. But increases have been far greater in some parts of the country compared to others: participation has more than doubled in Manchester, while it has risen by just 47 per cent in Blackpool. Still just 1 in 10 employers currently employ apprentices and the increase in participation rates has been largely driven by take-up among older workers.

While the NIC cut is likely to have a positive impact, cost is just one barrier to employers offering apprenticeships (see Figure 1 below) and they are likely to vary in different cities. For example, more employers are likely to cite barriers which reflect a lack of demand for skills as the main reason for not employing apprentices than those that cite cost. Demand for skills is likely to be lowest in cities, such as Blackpool and Middlesbrough, where fewer firms adopt high growth strategies.

Other employers cite bureaucracy or management and training time required. And lack of awareness continues to be an issue: just 1 in 3 have at least a good knowledge of what’s involved in offering an apprenticeship and more than half of employers have not heard of any government-run schemes. 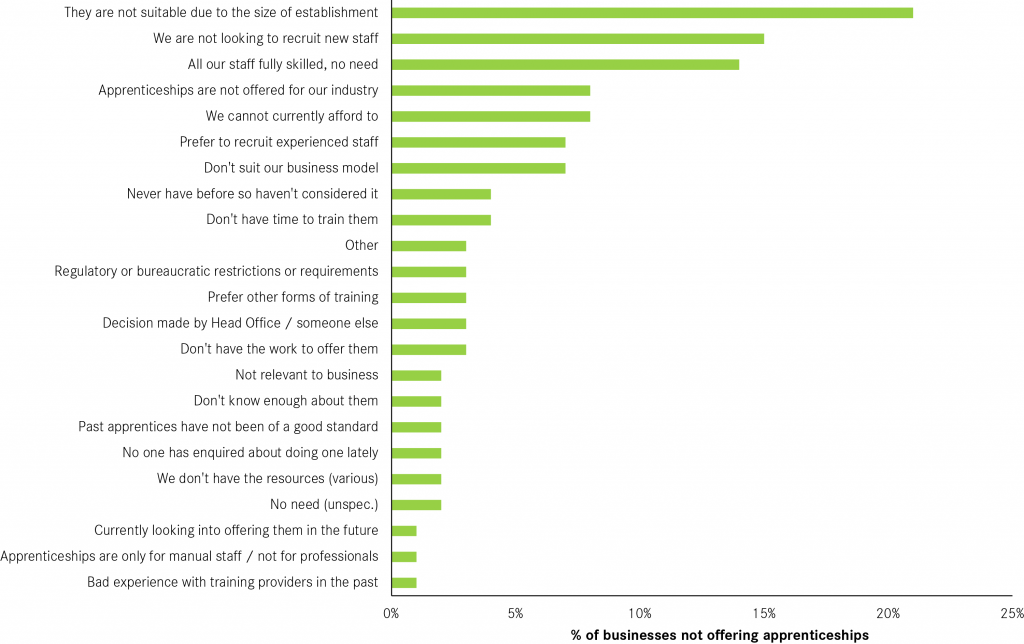 Cities are already playing an important role in overcoming these challenges and supporting and encouraging businesses to offer quality apprenticeships. The Greater Manchester Apprenticeship Hub, for example, has completed over 800 skills reviews with businesses, recruited and trained over 75 employer ambassadors, engaged with over 270 schools and engaged with providers to help ensure training offers meet the needs of employers. The city-region also offers discounted travel products to young apprentices.

The Coalition – and the next Government – needs to continue to support this type of activity to address non-financial barriers if Cameron’s three million target is to be met.