A lot of our research at the Centre has illustrated the importance of city-based ‘new work’ sectors like creative, digital and professional services to the national economy. This is why we are so keen for the importance of cities to be recognised in national policy discussions on productivity, jobs, innovation and enterprise. However, there is a dark undercurrent to the shift towards an urban knowledge-based economy, which is explored brilliantly in a recent study by Roger Martin, Richard Florida, Melissa Pogue and Charlotta Mellander (pdf here).

The authors are interested in who the winners and losers of this shift are in the US. To do this they bring together Michael Porter’s industrial cluster theory of ‘traded’ and ‘local’ clusters with Richard Florida’s occupational demarcation of ‘creative’ and ‘routine’ workers. The two approaches are combined into four major industrial-occupational categories as shown in the diagram below: 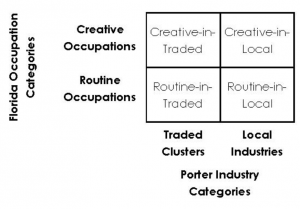 This framework is used to identify the shares of US employment in each category for 260 metro regions in the United States, which represent approximately 78 per cent of the total US population in 2012 and include all 52 metros with populations greater than one million.

Unsurprisingly, the top 10 list of large metros (those with more than one million people) with the biggest share of creative-in-traded employment reads like a who’s who of leading knowledge and tech hubs. San Jose tops the list, followed by San Francisco, Boston, Raleigh and Seattle. Washington DC, Austin, Denver, Minneapolis-Saint Paul and Hartford make up the top ten. In contrast many of the lagging metros are in the traditional manufacturing heartlands of the country. This reinforces what we know about the geography of the knowledge economy in countries like the US and the UK – it’s extremely spiky.

The paper then moves on to examine the relationship between these four industry-occupation categories and key measures of metro economic performance: economic growth, innovation, wages, and income inequality. Unsurprisingly, the authors find that higher economic growth is positively related to more employment in the creative-in-traded category, and that the metros with a higher share of creative-in-traded employment enjoy higher wages and incomes overall. This confirms what we know about the importance of having lots of jobs and workers in traded high-knowledge creative clusters to having a strong metro economy.

So far, so straight forward. But now is where the findings get more challenging. The authors’ analysis shows that the overall benefits are not felt by all four worker categories.

The table below shows the relative sizes of the four categories and the degree to which each category has a higher or lower average income compared to the US national average. As can be seen, routine-in-local workers earn by far the lowest wages on average and make up by far the largest category – 44.8 per cent of workers. The best off, creative-in-traded workers earn a 78.5 per cent premium, on average, but make up only 13.9 per cent of workers. 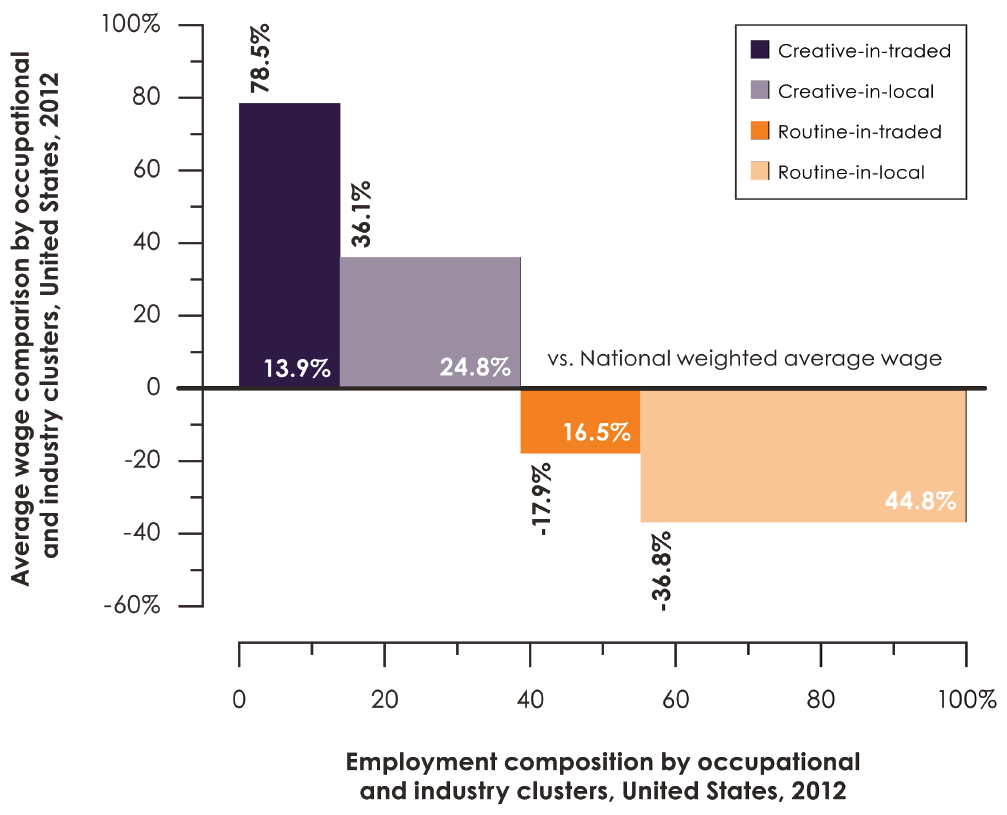 The results are even more challenging when looked at over time. While the proportion of workers in the highest-earning creative-in-traded category rose from 13.3 to 13.9 per cent between 2000 and 2012, the routine-in-local category increased by twice as much, from 43.5 to 44.8 per cent (1.3 percentage points versus 0.6 percentage points). Furthermore, the wage differentials have widened with creative-in-traded rising from 74.0 to 78.5 per cent above the national average wage and routine-in-local falling from 31.7 to 36.8 per cent below average. These trends suggest that the gap between workers is likely to continue widening over time.

More worryingly, the authors show that after accounting for higher median housing costs, routine workers in both traded and local industries are relatively worse off in metros with high shares of creative-in-traded employment.

The higher wages offered in metros with larger creative-in-traded employment create substantial incentives for more skilled workers to migrate to these metros. As housing costs rise, routine workers, especially those in routine-in-local jobs, are displaced to less expensive metros which, by definition, have smaller concentrations of creative-in-traded workers. This creates a vicious cycle where the advantaged get more advantaged over time, while the disadvantaged become ever more disadvantaged.

So it is clear that metros where creative-in-traded employment makes up a bigger share of the economy has better overall economic performance. But it’s also clear that metros with higher creative-in-traded employment experience greater levels of income inequality. As the authors note, this presents policy-makers with significant opportunities and substantial challenges.

In response the authors state that every city and every industry must boost the knowledge and creative content of all work while continuing to support the growth of knowledge-intensive jobs in traded clusters. On the supply side they highlight the need to ensure that current and future workers are equipped for knowledge and creative-intensive work. Significantly, they see the deeper challenges being on the demand side. They argue that all businesses should create working environments that add creativity (via independent judgment and decision-making) to routine work. This in turn will improve productivity and enable businesses to profitably pay higher wages.

The study’s emphasis on business leadership in improving skills and working environments is welcome and supports the research of John van Reenen and Nick Bloom on the management practices of firms, our own work on tackling youth unemployment, and the What Works Centre for Local Economic Growth’s evidence review on employment training, which finds that training tends to work best in firms rather than in classrooms.

The study’s findings will be thought-provoking for those of us who regard cities are the vehicles for economic, social and individual prosperity. But it’s important to remember that we cannot tackle the issue of inequality without cities. As Fran Tonkiss says in one of our City Talks podcasts, the issue of inequality is similar to the issue of climate change – while cities are the worst polluters they are also the best mechanisms we have of reducing carbon emissions.  Likewise, although cities may drive inequalities, they also provide the best opportunity for individuals to acquire the means and access the opportunities to improve their lot in life.

We will continue to investigate the ways in which cities can do more to create opportunities that enable people to realise their economic potential in the new year. Our upcoming Cities Outlook 2016 report will show which cities are already doing this, and highlight some of the challenges for others in achieving that goal – look out for that in January.