According to new figures released yesterday by the ONS, net migration – which stands at +330,000 for the year ending March 2015 – is now at the highest level on record. This follows a trend of increasing migration to the UK that has existed since the Second World War, and which has escalated from the 1990s onwards: just 0.6 per cent of all migrants currently living in England and Wales arrived between 1941 and 1950, while 50.3 per cent (3,776,469) arrived between 2001 and 2011.

The opening of UK borders to new EU countries, as well as worsening economic conditions in Southern Europe alongside the relative strength of the British economy, will have contributed to making the UK a more attractive place to seek work. And despite a fall back in migration levels between 2009 and 2011, today’s data suggests that the trend is on the up once more. But although a lot of emphasis has been placed on the level of migration, little thought is typically  given to the geography of migration and the effect that migration is having on our cities. 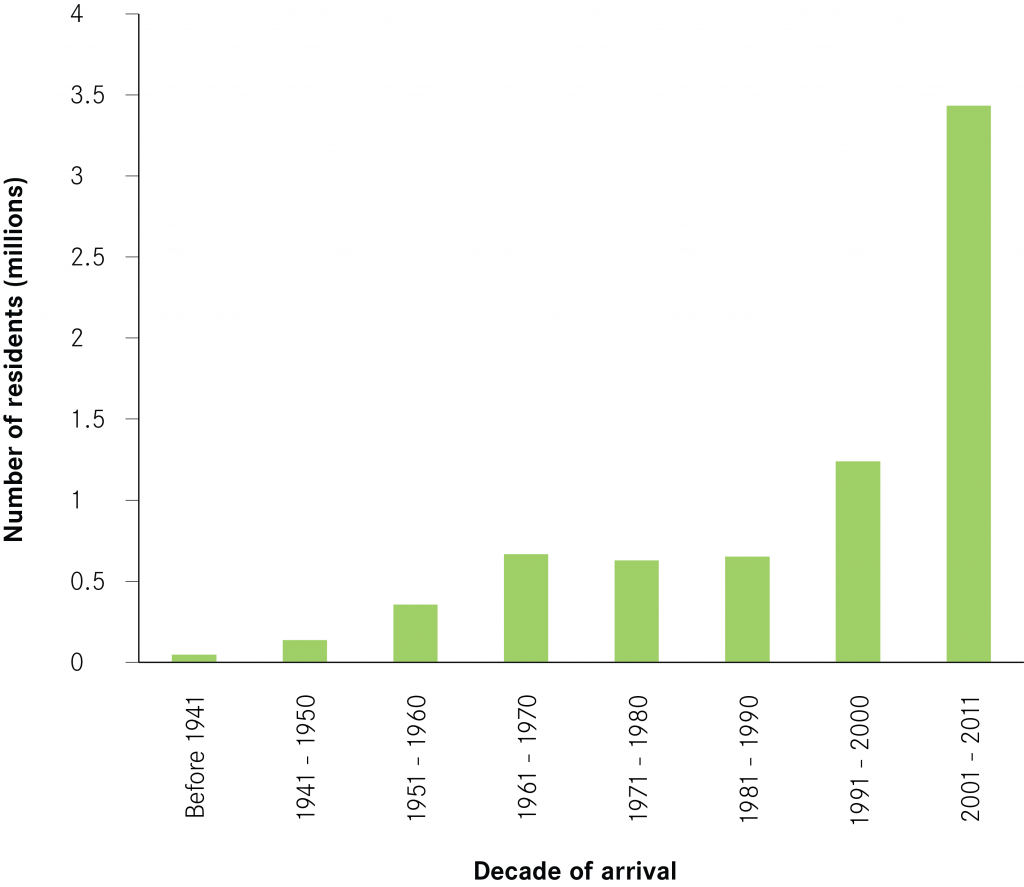 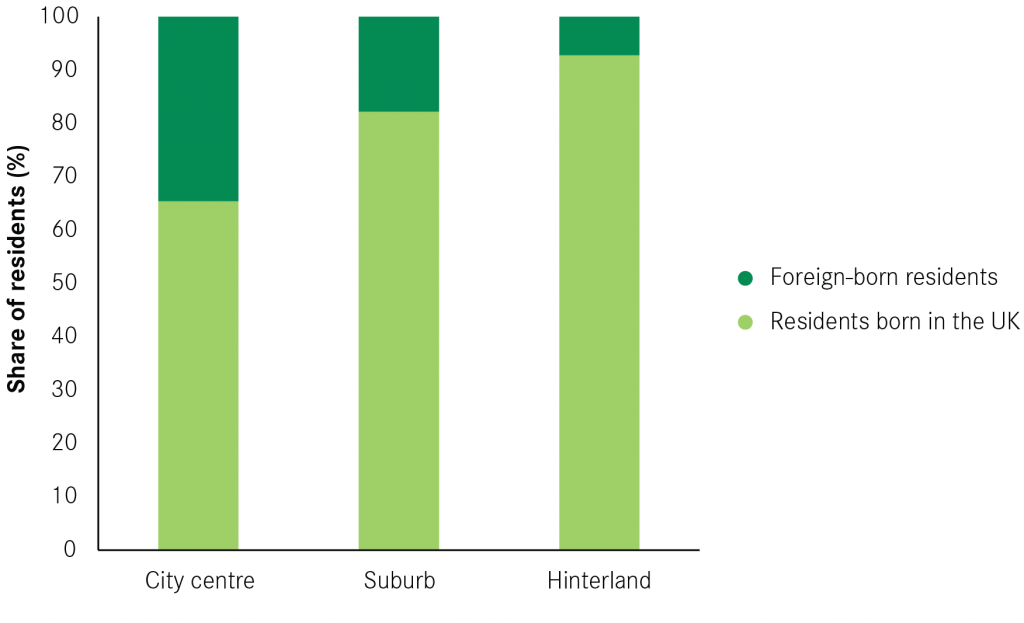 Overall, the majority of migrants live in the suburbs of cities – some 73 percent. This is unsurprising, since suburbs make up a significant part of the geographical area of cities. That said, this figure is significantly higher than the share of the total population of England and Wales living in suburbs – which is some 55 per cent.  The difference is even starker when we look at city centres: while only 1.6 per cent of all residents in England and Wales live in a city centre, 4 per cent of migrants live in city centres. 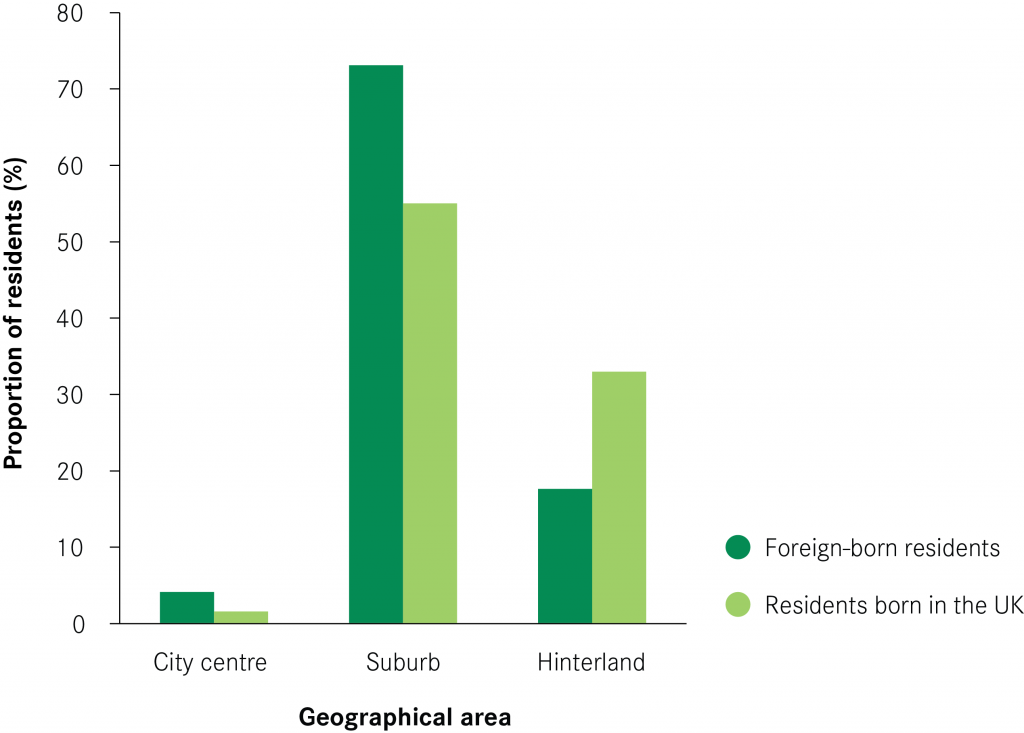 These trends are likely in part to reflect the different residential choices people make at different stages of their life. As we found through our recent report, Urban Demographics: Where people live and work,  one in three city centre residents in England and Wales are aged 20-29, while residents in suburbs and hinterlands are much older. And as migrants arriving a long time ago will necessarily be older, the patterns of older migrants living in hinterlands and suburbs fits.

Recent migrants are, on average, likely to be younger than UK-born workers. The likelihood of more recently arriving migrants living in city centres could therefore reflect their age, or could also reflect a growing preference for city-centre living from migrants – and there is evidence that international students in particular have driven a growing preference for city centre living. 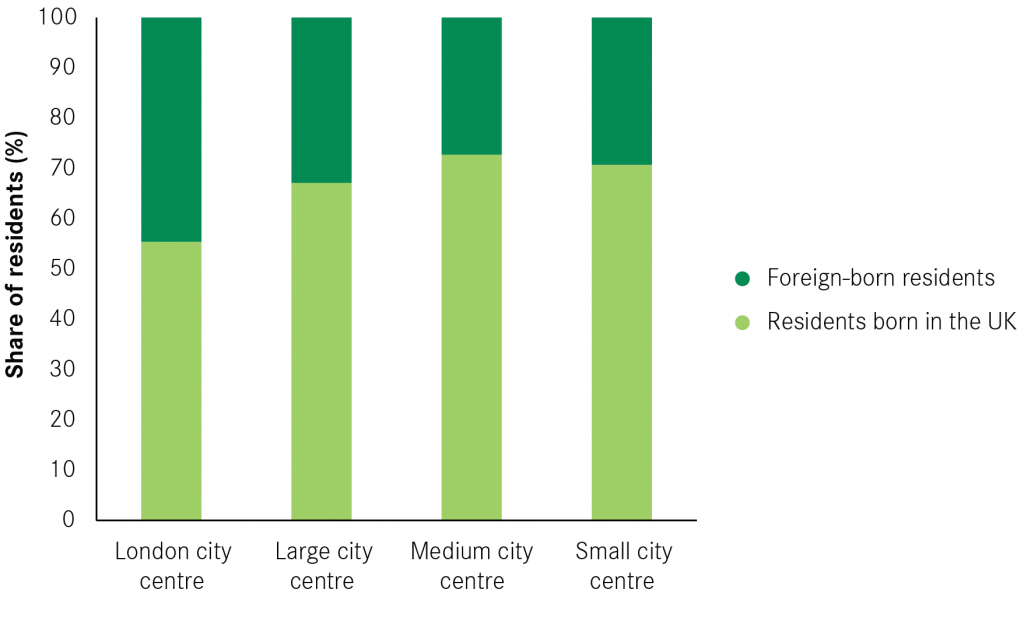 This data illustrates how migrants make up a substantial proportion of the population of cities, and city centres in particular. Recent migrants are more likely to live in city centres, which reflects the preferences of age groups, but also the number of international students living in city centres.

Any changes to immigration policy, therefore, are likely to have a strong impact on cities, and city centres in particular. But this effect will vary between cities. In the city centres of London, other large cities, and some smaller cities such as Peterborough, where a high proportion of residents are migrants and much of their growth results from international migration, the effects are likely to be considerable. These places will need to take this into account when planning for growth in the face of a policy landscape on immigration that is changing fast.