City centre living has made a comeback. After decades of people quitting the centre of cities for the sanctuary of suburbs and more rural areas, this pattern has reversed.

Between 2001 and 2011, the number of people living in city centres increased by 37 per cent, compared to 8 per cent and 6 per cent in suburbs and hinterlands of cities respectively.

But this return to city centre living wasn’t seen everywhere – as the chart below shows, it was principally led by our large cities. 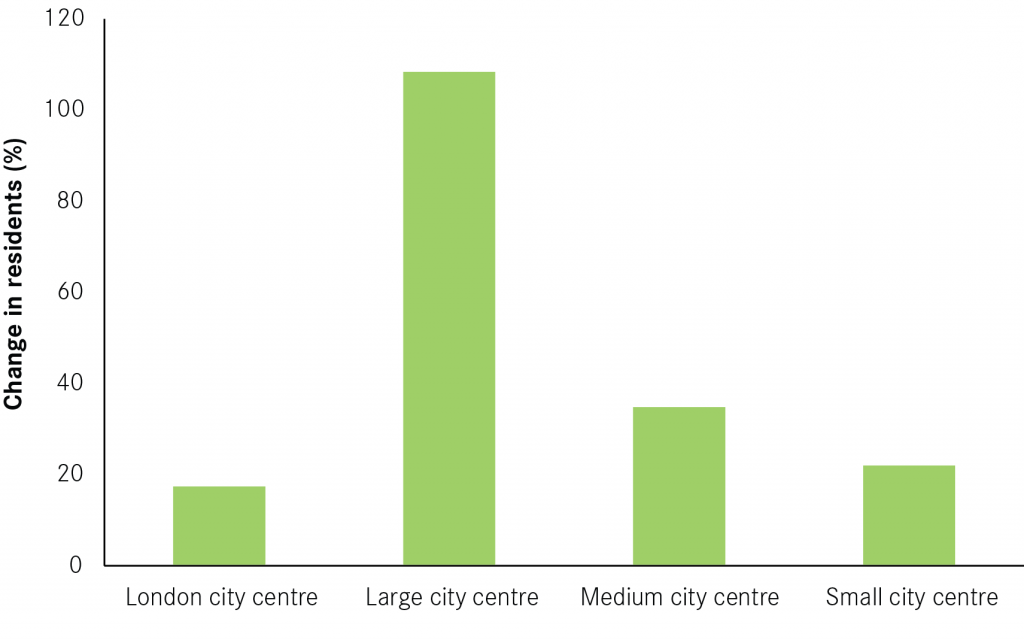 And it was driven by young professionals and students – of all the people who moved to the city centres of large cities between 2001 and 2011, around half had a degree, with the majority of the rest studying for one.

Manchester was at the forefront of this growth. In the decade to 2011, its city centre residents increased by 20,000 – growth of 83 per cent (see chart below). This was matched by a boom in apartment building – around 7,000 new homes were sold in the city centre during this time. 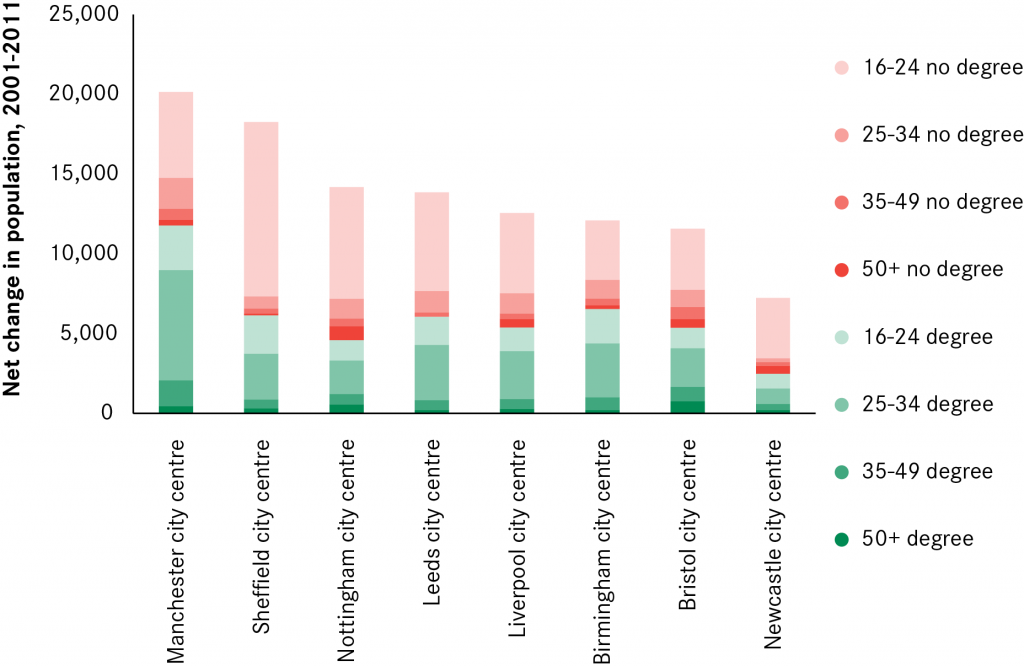 The demographic of the people moving into Manchester city centre tells us something interesting about the return to urban living more generally, and why it has been much stronger in some cities than in others.

Manchester’s growth was mainly driven by young professionals. Of all the residents moving into Manchester city centre in the decade to 2011, nearly 60 per cent had a degree, the majority of which were aged under 35.

This has come at a time when Manchester’s city centre economy has also seen a resurgence. Between 1998 and 2011, the city centre saw growth in private sector jobs of 44 per cent – the second fastest growth seen in any city centre. And this was driven by knowledge-based services jobs, which tend to be high paid and high skilled. They accounted for three quarters of this growth.

This strong growth of the city centre economy has vastly improved its appeal as a place to live. So it is no surprise that in the survey work we conducted as part of our research, residents of Manchester city centre listed access to work as one of the key benefits of living where they do.

Not every city centre offers this benefit. While Manchester and other large city centres have seen strong private sector jobs growth, many medium and small sized cities have seen their centres contract. And this has weakened the attractiveness of their city centres as places to live – why choose to live in a flat and commute out of town, when you can live in a house with a garage and garden in the suburbs instead? It’s the same reason why Sheffield’s city centre residential growth – while large – was driven by students. It has been the only city to see a decline in its city centre economy in recent years, with the result being that it has been much less attractive to young professionals than central Manchester.

As the UK continues to specialise in more knowledge-based services jobs, the city centre locations that they prefer will play an ever larger role in the national economy. And so it’s likely that Manchester city centre will continue to be the engine room of the wider city economy in the coming years as it has done in the recent past.

This has two big implications for policy. The first is that as the economy increasingly concentrates in one small part of the city, commuting by car will become ever less practical. In central London, home to 1.4 million jobs in 2011, 90 per cent of workers commuted either by public transport, by foot or by bike. And so to support the continued growth of the Manchester city centre economy, continued improvements will need to be made to public transport to both get people into work each day and widen the net of people that city centre employers can hire from.

The second relates to decisions on how space is used across a city. People value amenities differently at different stages of their lives, and this means that they choose to live in different parts of a city – be that the city centre, the suburbs or the fringes of a city. This means that the geography that planning decisions are taken should stretch across a city, rather than individual local authorities. Meanwhile, planners will also need to balance the competing demands for residential and commercial space within the city centre. The introduction of Permitted Development Rights under the last Parliament potentially skews planning law in favour of residential development, which may start restrict the supply of commercial space if Manchester’s city centre economy continues its recent strong growth.

Manchester city centre has gone through a rebirth, both in terms of its economy and its attractiveness as a place to live. And as the city as a whole continues its revival, the role that its centre plays will become ever more important. The challenge for Greater Manchester policy makers will be to continue to improve public transport links and balance commercial and residential demand for city centre space to support the city centre’s future growth.

This blog was originally posted on the Place North West website.