On Monday 15 June, after months of complete shutdown, non-essential shops across the UK started to re-open. This was expected to bring some long-awaited relief for the retail sector in our high streets. On the whole, that is what happened but footfall data gives us a more nuanced picture of how it played out across the country.

Overall, the increase in activity has been incremental and patchy

Despite the long queues we saw outside some well-known retail chains, shoppers did not rush back to the high streets on Day One.

A two-week perspective shows that they eventually did but it was a slow burn. In the first week of retail opening (15 to 21 June), footfall was up four percentage points across the UK, but the week after (22 to 28 June), it picked up a further eight points. This suggests that high streets in the UK’s 63 largest cities and towns are slowly getting closer to their pre-lockdown levels of footfall activity.

Long queues outside Primark do not tell the whole story

Not all places have seen the same enthusiastic return of shoppers. What the data reveals post-retail re-opening largely echoes our previous findings. In small and medium-sized cities, footfall is up almost 20 percentage points – and now reaches 50 per cent of pre-lockdown footfall levels. But large cities such as Manchester, Birmingham or Liverpool are still around a third of their previous levels of activity. In London, footfall has only picked up two percentage points after non-essential retail reopening.

And it seems to be mostly driven by weekend trade

Weekends have seen most of the increase in footfall. On average, 45 per cent of weekend activity has returned to pre-lockdown levels – higher than the overall score including workers and the night-time economy. This partly explains the findings mentioned above: in a number of small city centres, the overall retail sector is much more dependent on weekend trade. They have now recovered 63 per cent of their weekend activity, against 38 per cent in large cities.

Cities’ ability to attract people from outside still matters — and varies

Cities have slowly opened up. On average, the share of people visiting a city centre who lived outside the city was around 37 per cent at the end of June, against 24 per cent in the last week of May.

Interestingly, that metric seems to explain pretty well the variations in overall recovery. Where there has been an increase in activity since the end of May, it was mostly driven by a growing proportion of outside visitors. We knew already that large cities with a larger catchment area struggled the most to recover from lockdown, and the new data confirms that this trend persisted after non-essential retail reopened. The closer a city is to its pre-lockdown levels of outside visitors, the stronger its recovery (see graph below). 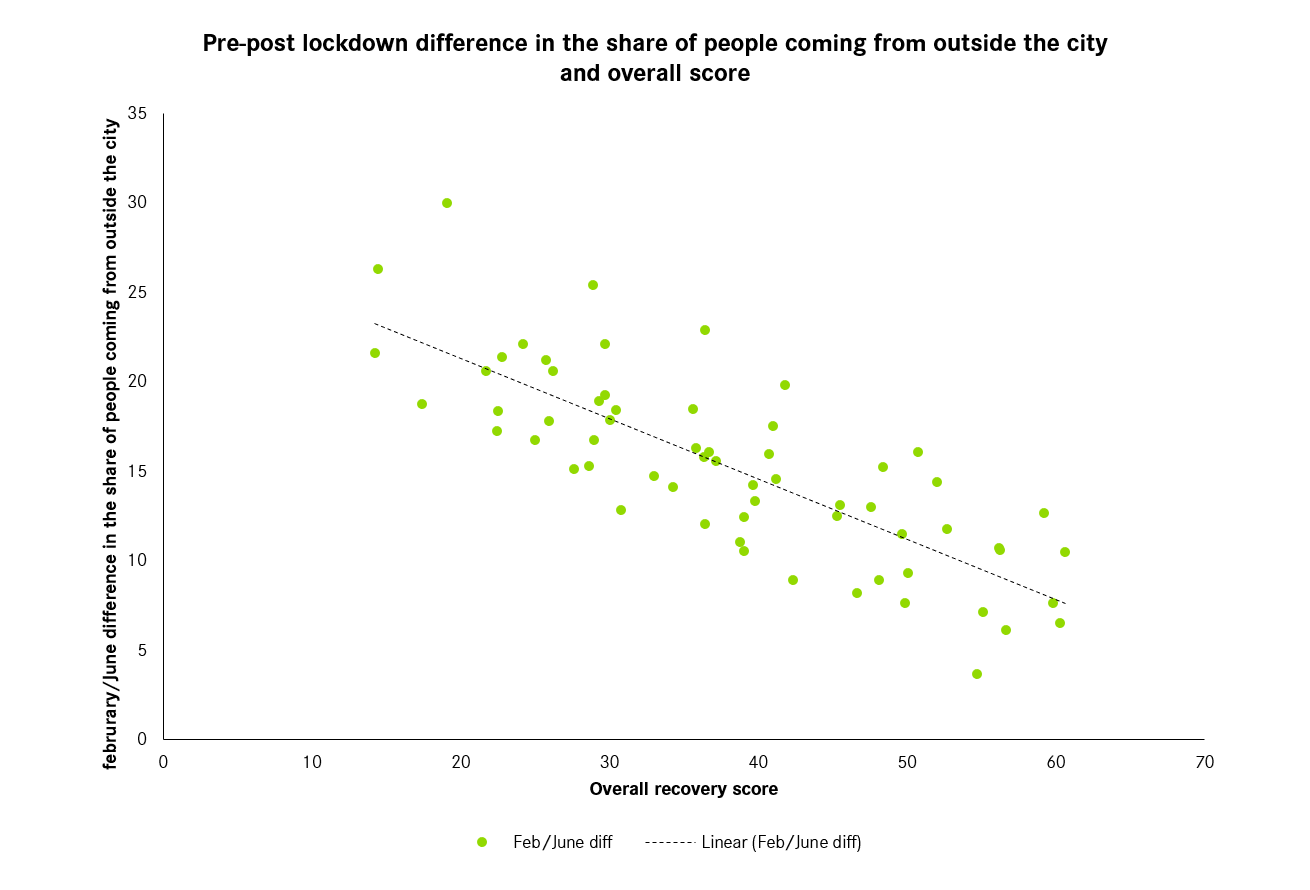 After retail, what can that tell us about pubs and restaurants reopening?

It is hard to predict how people’s behaviours are going to change as a result of pubs and restaurants re-opening from last Saturday. Although city centres act as both places of retail consumption and leisure, there is a major difference between the two: the first can be done online, the latter is a social experience. Evidence from the Office for National Statistics has shown that online spend reached a record high during lockdown, whether it is for food or non-essential shopping. Pubs and restaurants have not benefited from that fallback solution, so the scale of the response may vary.

But the patterns could persist, particularly until workers return to their offices in city centres. This is particularly true for larger cities, where retail and leisure sectors are much more reliant on weekday workers.

Overall, in line with other countries, data to date suggests that despite an increase in footfall, the easing of lockdown isn’t like releasing a champagne cork. People may feel nervous about going back to a crowded high street. The next update on the tracker will show us whether the reopening of pubs spurred a change in behaviour – and the one after that will begin to show us the impact of the Chancellor’s ‘Eat Out to Help Out’ discount announced on Wednesday.