Figures released by ONS this week showed that the number of people aged between 20 and 34 living with their parents continued to increase in 2011. And via the Guardian Datablog we’ve been able to look at what the pattern of young people living at home looks like across cities.

Southend has the highest proportion of 20 to 34 year olds living with their parents, followed by Chatham. Meanwhile Oxford and Cambridge have the lowest shares, as shown by the table below. 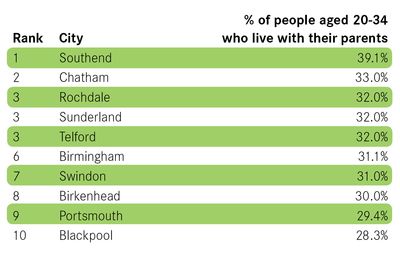 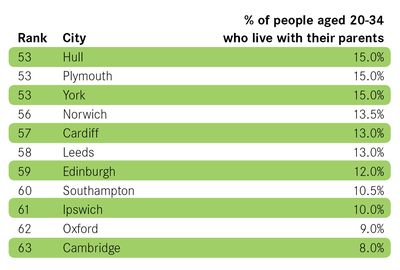 Some sources, including the ONS instelf, have suggested that the increase in the number of young people living at home is to do with increasing house prices.

But a quick and dirty regression suggests that this is not the case. Housing affordability – the ratio of house prices to earnings – appears not to have an impact (i.e. is “not significant”). Unsurprisingly, universities do have an impact – many of the cities in the bottom 10 of the above table have large student populations. Unemployment also seems to be behind some of the variation – those places with higher claimant count rates also have more young people still living at home.

This analysis is clearly crude, and the results should be taken with caution. But it does at least suggest that affordability of houses (and by implication rents) isn’t a key driver of young people’s decisions to stay at home.