There has been repeated attempts to secure devolution for the North East. In September 2016, a deal between the seven authorities was scrapped when Sunderland, Gateshead, County Durham and South Tyneside stopped talks due fears of losing EU funding post-Brexit. Respectably, the three North of Tyne authorities (Newcastle, North Tyneside and Northumberland) continued to secure a devolution deal with the first mayoral election in 2019.

While pragmatic, this smaller geography cut through the area’s economy, in particular separating Gateshead and South Tyneside from Newcastle local authority. Figure 1 shows that one in four residents of Gateshead, and one in ten residents of South Tyneside work in Newcastle. That South Tyneside also looks towards Sunderland, with 16 per of working residents living in the former but working in the latter, shows why covering Wearside as well as Tyneside makes sense.

Figure 1: Commuting Patterns between local authorities in the North East

Source: Census (2011)
Note: For simplicity, only commuting flows over 6% are shown on the above map.

This does not mean that the new geography is perfect. As shown in Figure 2, there are areas in north Northumberland and south County Durham where the number of residents who work in one of the other six local authorities is much smaller. In some cases, it is less than 5 per cent of residents that work in one of the other north east local authorities. Before both authorities became unitary authorities in 2009, there would have been greater flexibility to create a more bespoke fitting devolution deal. But this obviously isn’t the case now, and it is not a reason to slow down on devolution for the North East.

Figure 2: Share of residents that work in north east local authority outside of where they live 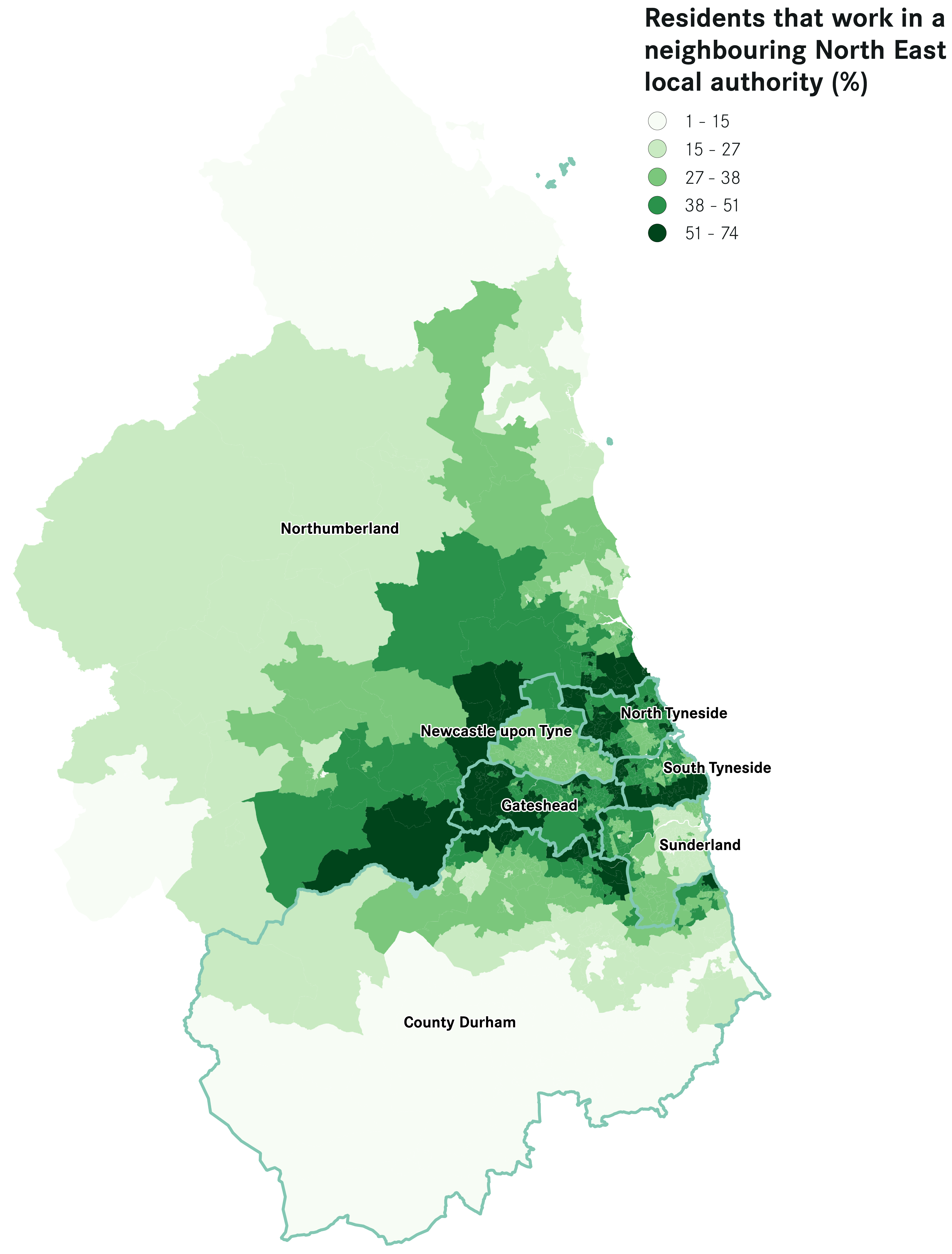 The deal also brings further powers, and with it more funding to the region. While retaining powers over housing and regeneration, adult education, and abilities to set a precept on council tax bills, the new mayor (to be elected in May 2024) will gain further powers over transport. While the annual allocation for the investment fund will increase, the per head allocation (£24 per head) will not change between the mayoralties.  The big change will come as a result of the North East Mayoral Combined Authority now being eligible for the City Region Sustainable Transport Settlement, which will provide £563 million of capital funding. As a result, the deal will bring an additional spend of almost £300 per head over 30 years compared to the North of Tyne deal.

The politics of devolution are not easy. The North East devolution deal represents a triumph in political will and economic sense. It means the geography of policy making now much better matches the geography of the economy. This should be a good thing not only for the people who live there, but also for the contribution the area makes to the national economy.

Devolution
North of Tyne devolution – a victory for pragmatism over perfection

The latest of the devolution deals brings together the coalition of the willing, but its long term effectiveness depends on bringing its neighbours along too.