Towns that are located close to cities are often characterised as commuter or ‘dormitory’ towns – places in which residents do little more than live and sleep, choosing to work and play some distance away in the nearby metropolis.

The assumption tends to be that because a high level of commuting depletes these towns of their workers, they are left with weak local economies, featuring scant commercial activity beyond a small amount of local retail business.

The evidence, however, shows that towns do not all have the same relationship with cities near to them, and that a combination of proximity to a city and good transport links does not automatically confer ‘dormitory town’ status on a place.

For example, the verdict of a recent report by the Urban Transport Group, About towns; How transport can help towns thrive, is that transport interventions can benefit towns near to cities by creating jobs, attracting investment, opening up sites for homes and turning these places into destinations in their own right.

In a similar vein, our recent Talk of the Town report examines the flow of commuters between 62 cities and 164 towns, demonstrating that mutually beneficial labour market relationships exist between the two. Daily commuters from towns provide cities around the country with 2.6 million workers, but, on the flip side, cities supply town residents with 2.6 million jobs. The report’s analysis also points to the following:

Towns close to cities have lower levels of unemployment

In towns that are close to relatively strong cities, unemployment sits at 8.9 per cent, while in those closer to the weaker cities, it is 11.7 per cent. And this is still lower than the rural town average of 12.1 per cent. In terms of employment, it’s clear that being close to a city, even if it is a weak city, is better than not being close to a city at all.

In terms of a country-wide average, 18 per cent of all town residents work in cities. However, this figure masks a great deal of variation from city-to-city, with commuters ranging from 1 per cent in Dumfries and Barrow to 56 per cent in Kirkby and Canvey Island. Only 26 out of the 164 towns (or 16 per cent) have more than a third of residents employed in a city, while only in four towns are more than half the residents working in cities. It is worth noting that most of these towns fall towards the smaller end of the size spectrum. Out of the four towns that have more than half their working residents commuting into a city, three (Billericay, Canvey Island and Kirkby) are located in the hinterland of multiple cities.

Towns have more jobs than people – around 100,000 more than their collective 4.4 million residents. Of course, there is variation within this – towns like Barry and Bognor Regis have six jobs for every 10 residents, while towns like Durham, Chichester and Truro have more than twice as many jobs as they have people. But overall, only 22 out of the 164 towns have jobs for less than 80 per cent of their residents. Once again, the size of the place comes into play. Almost all of the towns with low jobs provision fall on the small side of the scale spectrum.

But these aren’t the same towns

Figure 1: Commuting from towns and job availability in them 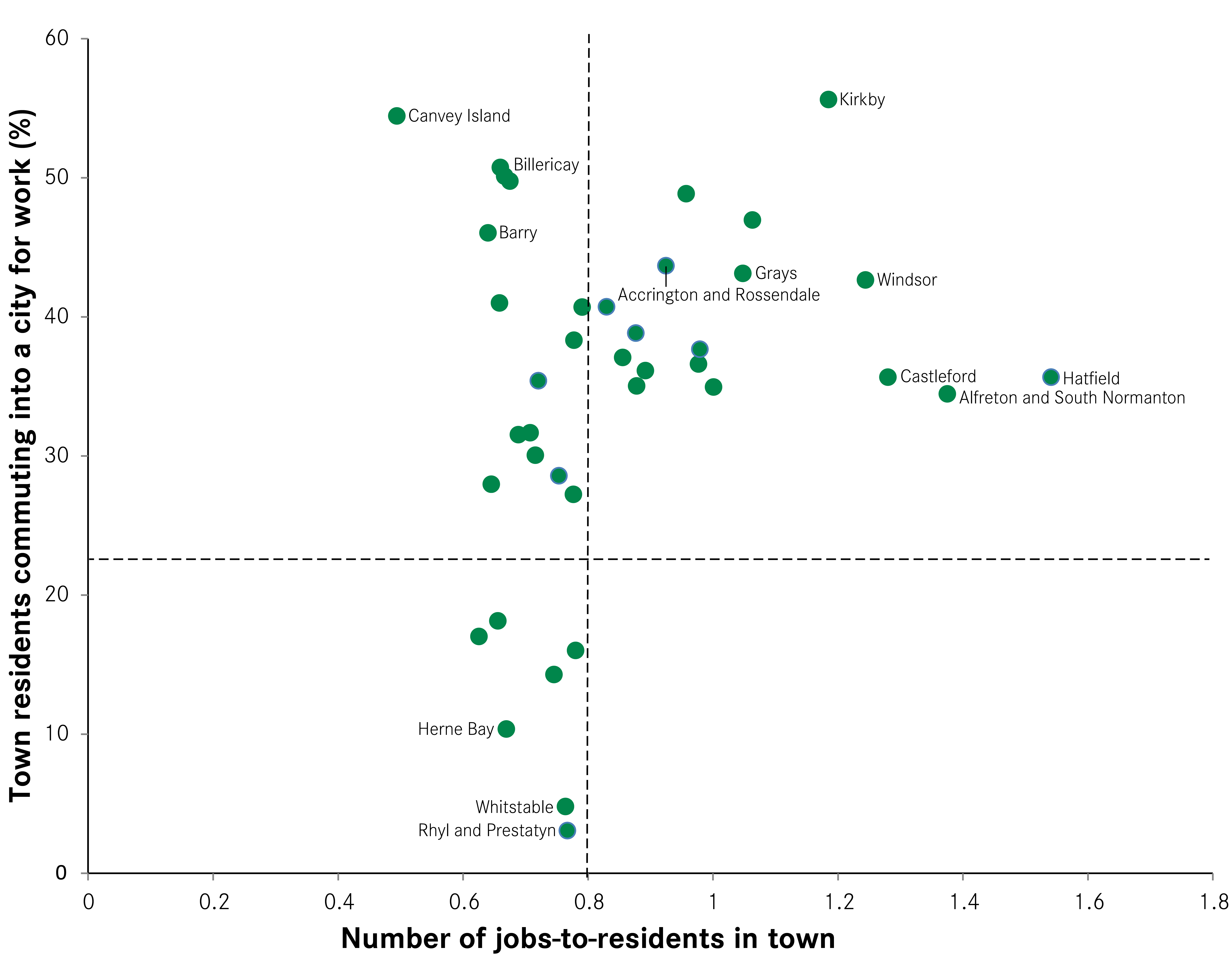 As such, the idea of a dormitory town with an economy that’s hollowed-out by a commuting workforce is misleading, given that proximity to a city has such a clear positive impact on employment rates within towns themselves.

Transport policies should take commuting links between towns and cities into account, not only to connect the places where people live and work but to strengthen local economies in the towns themselves. To echo the recommendations from our previous report, and the recent findings from the Urban Transport Group, further devolution would allow the flexibility needed for this commuting co-ordination to take place.

Housing Towns
Housing Levelling up
Targeting land banking is only tackling a symptom, not providing a cure