It’s been a big week for buses. The news that the judicial review brought by two private operators in Greater Manchester went in favour of Mayor Andy Burnham’s franchising plans is a huge win for both advocates of public control over bus routes and the general public. Greater Manchester will finally have an affordable, accessible London-style, integrated transport network, transforming the way that buses, trams, trains and active travel are delivered through the “Bee Network”.

For buses, this would mean that the Mayoral Combined Authority would be able to set and control bus fares, frequencies and timetables, and specify bus networks and fleets used, with private operators bidding to run (rather than ‘owning’) routes. More details are expected to be released on how franchising will be implemented across the city region early next week. In terms of timeframe, the first round of franchised bus services is likely to be introduced in early to mid-2023, with the expectation that by 2025, all bus services across the city region will be under public control. By 2030, the whole public transport network will be transformed.

In addition to Manchester, last week the Liverpool City Region Combined Authority voted to begin the adoption of a franchised bus system. The next step involves an independent assessment on bus franchising in the city region as well as a public consultation. This coincided with an announcement from South Yorkshire’s metro mayor, Dan Jarvis, that the city region will begin a formal assessment of the bus franchising model. If approved, the Mayoral Combined Authority will move to the next stage of the process and look at whether public control of buses would enable the priorities set out in the city region’s Bus Service Improvement Plan (BSIP).

So why does this all matter? Most importantly, the general public really care about buses. Recent polling by the Northern Agenda showed that over 40 per cent of people across the North of England use the bus three or more times a week. But around two thirds of people cite reasons for not using buses as frequency issues, their lateness, costs and length of journey time, and two thirds also think that services would be improved if they were under public control as in London. This would all be addressed by franchising.

Buses are critical urban infrastructure yet tend to be overlooked in favour of larger scale projects to increase connectivity, however they are a cheaper, more sustainable form of transport. Good urban mobility provides people with access to vital services, whilst increasing workers’ access to jobs, and is key to improving British cities’ lagging productivity potential and unlocking economic growth.

It should be reiterated that these developments towards local control do not lessen the need for continued funding from Whitehall; if anything, these new models will require additional central and/or local funding streams to be considered. The government recently agreed to extend the Bus Recovery Grant funding, introduced as a direct result of the pandemic’s impact on bus patronage, to October, and provide the “final tranche” of £150 million for affected services across the country. This is intended to cover costs where fares cannot.

However, there is still no detail as to how this emergency funding will be allocated by city region, whilst the sum of £150 million to cover the next six months is likely nowhere near enough. To put this into perspective, analysis by the shadow buses minister for the Guardian notes that the funding bids submitted by local transport authorities (LTAs) for additional investment in buses (as part of the National Bus Strategy) amount to over £9 billion, but reports suggest the pot available from central government has shrunk to less than £1.5 billion. Government needs to make sure it works with LTAs to consider the longer-term plan for bus services across the UK, whilst considering how changing passenger numbers will affect the bus funding model.

The transfer of accountability and decision-making from the private bus operators to combined authorities serves as an example of a long-term policy solution for resolving cities’ fragmented and expensive public transport systems. These historic decisions will mean that for the first time in nearly four decades, the populations of Manchester, Liverpool and South Yorkshire can hopefully look forward to more reliable, cheaper, greener and faster services. Central government must also continue to provide funding, whilst encouraging other cities to pursue franchising in order to transform their region’s transport systems. 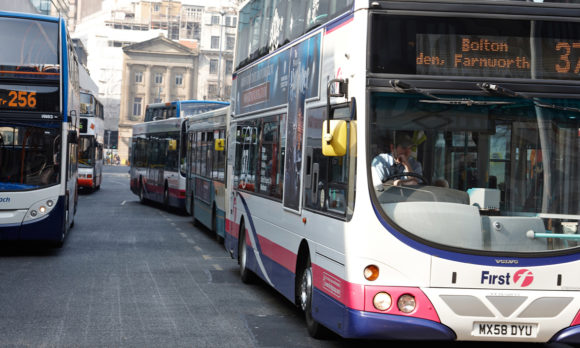