Thousands of A-levels students have received their exam results today, with a record number being accepted on to higher education courses. But the likelihood of a young person going to university varies enormously across the country. For example, just 1 in 5 young people in Hastings go to university compared to nearly 1 in 2 young people in Cambridge and the gap is getting wider.

As we’ve highlighted previously, the chances that young people will go to university are far higher in London and cities in the South East. There’s also a divide across the ‘Northern Powerhouse’ with higher participation rates in cities in the North West compared to Yorkshire. Meanwhile, the Scottish cities feature in the top 20 cities with the highest participation rates, with Aberdeen, Edinburgh and Glasgow sitting in the top five.

It’s not just grades that matter.

What factors help explain these trends? The proportion of young people studying A-levels and the grades they get vary across the country, which will obviously impact on how many young people will go on to university (there is a relationship between GCSE attainment and university participation, for example). However, take two young people with exactly the same grades and the chances of them going to university will vary according to where they live.

There’s a 97 per cent chance a young person with three A’s will go on to university, regardless of where they’re from. But the same can’t be said for young people getting lower grades. For example, the proportion of young people getting DDE and going on to university drops to 59 per cent in the least deprived parts of the country, and falls a further 7 percentage points to 52 per cent in the most deprived areas.

Indeed, studies have found a relationship between parental income and the chances of a young person going to university. Young people with parents working in professional occupations are three times more likely to go to a ‘high status’ university than those with working class parents.

And the gap is widening.

With far lower unemployment rates and an estimated lifetime graduate premium of over £200k, these trends are likely to further reinforce economic divides between cities, as patterns of youth employment between cities follow university participation rates.

A more joined up approach.

The government needs to work with cities to continue to break down the barriers to university access by improving attainment, advice and aspirations. At the same time greater focus needs to be put on improving the quality and accessibility of alternative routes into employment. This means working with employers across a range of industries to change recruitment practices and drive up the number of apprenticeships involving meaningful on-the-job training.

There’s clearly no silver bullet to these long-running, entrenched divides.  But given the complexity of issues impacting on young people’s access to education and employment opportunities, it is unrealistic to expect any significant change without different partners from across the public and private sectors taking a more joined up approach. 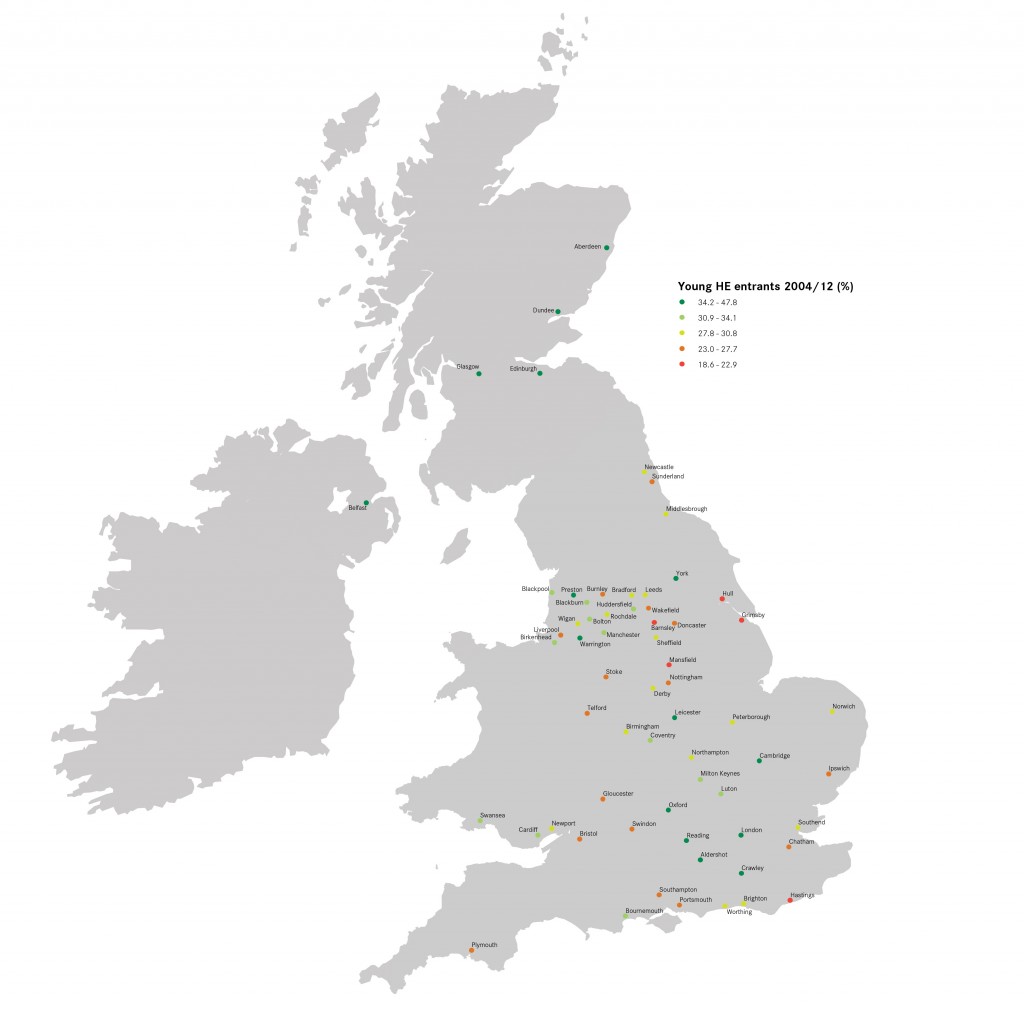