If we’re serious about supporting what the Chancellor calls a ‘Northern Powerhouse’, then we need to improve transport links within and between our largest Northern cities. That’s the key message in our new report Fast Track to Growth, released today.

The city centres of Manchester, Birmingham, Leeds and Glasgow contain the highest shares of high-paid, professional jobs outside of Central London – in industries with the capacity to drive significant economic growth. But while central London has excellent train links with its neighbouring cities – connecting workers to jobs, and businesses to other businesses – links between other large cities are much slower.

Of the 14 city pairs that we looked at, all but two rail links were found to be slower than London’s connection to Cambridge (see below). The Leeds to Manchester link is particularly slow despite the rail line connecting 90,000 knowledge intensive business services jobs in the two city centres – it takes over 50 percent longer to travel between Manchester and Leeds than between Milton Keynes and London, despite the distance between the two being shorter. 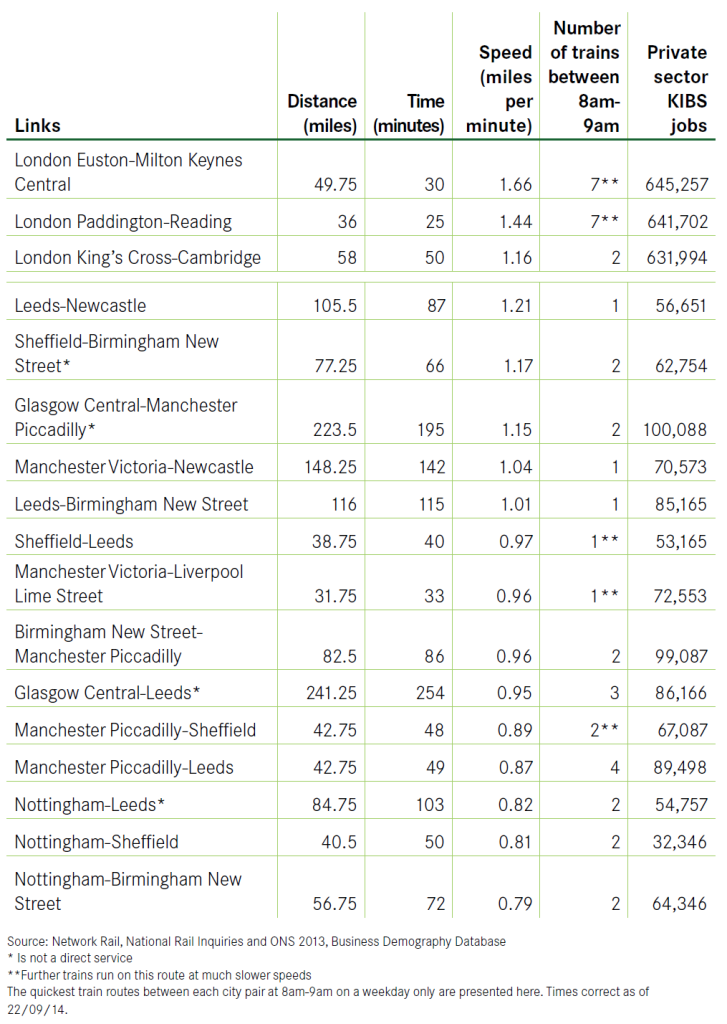 From an economic point of view, transport connections are important for two reasons. Firstly, they link workers to jobs, giving businesses greater choice over whom they employ, and affording workers greater choice over who they work for. Secondly, they better connect businesses with the knowledge and services of other firms, opening up networks and collaborative opportunities with implications for trade. London’s excellent transport links mean that businesses and workers in and around the capital have unrivalled choice, and much greater capacity to drive economic prosperity.

The importance of infrastructure to support growth in the capital is well understood, which is why the city is making plans for Crossrail 2 when we’re still years from seeing the first train run on Crossrail 1. This is the kind of approach that we need to see in big cities in the North for two reasons. Firstly, policy should focus on generating investment in the fundamental, long-term drivers of economic growth, as opposed to affordig too much emphasis on the more ‘exciting’ – but ultimately less effective – practice of simply putting up new shiny buildings or creating cultural quarters. Secondly, there are lessons to be learned from the phased approach taken to developing the Crossrail project, bringing forward plans in stages instead of asking for everything at once.

This is why policies around transport, as well as skills, should be at the heart of our forthcoming Northern Futures conference in Leeds. Crucially, as is the case in the report, this argument shouldn’t be made on equity alone, as has been done by others. Instead, it should be one firmly rooted in the economy.

The speeds achieved by train links into London show what is and has been for some time achievable for rail connections in the UK. If we want policy to support growth in the North, we should be looking to bring the performance of our train lines in and out of our largest cities a little closer to what London, our most successful city, has enjoyed for a number of years.