The announcement of a number of devolution deals over the past few weeks shows that despite a certain degree of political and economic turmoil, progress is being made on the levelling up agenda. This commitment is welcome, especially the efforts to overcome fragmentation and the promises to deliver mayors outside of the existing metro mayor city-regions.

If devolution is to deliver economic prosperity – which should be the central purpose of devolution within England due to the country’s economic divides – then responsibility for local economic matters such as housing and planning, transport, and skills needs to click with local economies.

Commuting patterns for residents of Derbyshire and Nottinghamshire, 2011 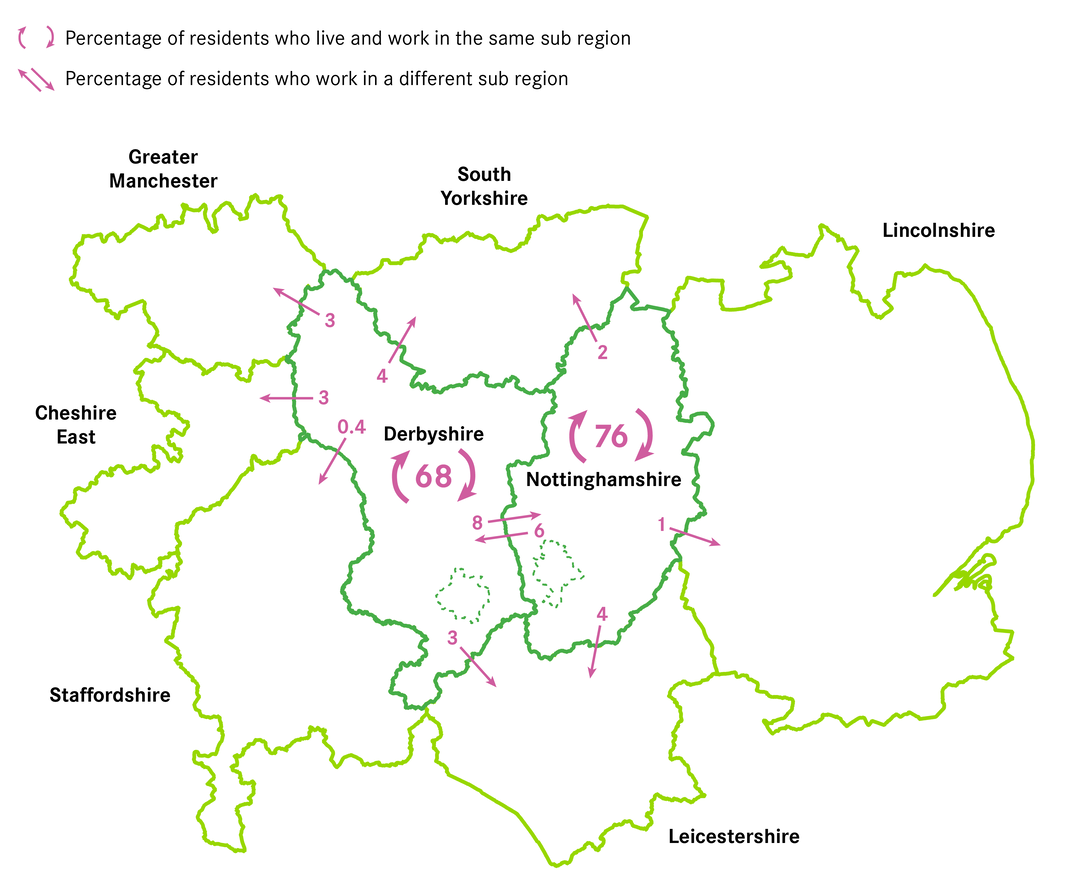 The East Midlands’ devolution deal’s geography mismatch will struggle to overcome problems of fragmentation that hamper local economic policymaking and service delivery, as North of Tyne, Cambridgeshire and Peterborough, and West of England combined authorities have already experienced. Rather than governing an economic area, the new East Midlands Combined Authority will function as an umbrella organisation for the four local councils and spend a large part of its capacity bargaining between them.

As an example, while the East Midlands Mayor will acquire control over the Adult Education Budget for the entire geography, the skills requirements of Derby and Nottingham differ due to former’s special strengths in engineering and aerospace. Although this may sound like a trivial matter, it changes the incentives faced by the new mayor to be focused on allocating spending to balance between the two separate economies, rather than getting the best value for the local pound. Policy debates will be dogged by what a “fair” allocation of skills spending would look like between the two city economies, rather than spending as much on skills as each local economy needs.

In other cases, the four constituent councils will just keep economic powers instead of transferring them to the mayor. For example, while the East Midlands Mayor will be nominally responsible for the local transport plan, the constituent councils will actually deliver the first local transport plan, and they will retain operational responsibility for managing highways.

Other problems of this type emerge from the new triple-tier structure, as the mayor will in practice be sharing economic powers with the constituent city and county councils as well as the non-constituent district councils under the counties. For instance, the mayor will acquire some powers to operate a development corporation, the power to create local plans and thereby the lion’s share of policymaking over the built environment will remain with districts. This will limit the mayor’s ability to shape the economy of their area for its residents.

The one advantage that the East Midlands deal has is it corresponds to the existing D2N2 Local Enterprise Partnership, and it is supported by the four constituent councils. Levelling up is too important to be left to “coalitions of the willing” though. Government needs to stick to its guns and agree to devolution deals that match its own White Paper and previous successful devolution deals if levelling up is to be a success.

Devolving to poor geographies makes it harder to deliver other reforms that are required for levelling up. For example, the Levelling Up White Paper says that the existing metro mayors will eventually take on Police and Crime Commissioner (PCC) responsibilities for their areas, this will not be possible in D2N2 as there are two separate PCCs and constabularies – one for Derbyshire, and one for Nottinghamshire. The devolution deal also does not mention how the merged geography will interact with the two counties’ separate Integrated Care Systems – the replacements to Clinical Commissioning Groups – which have a statutory requirement to work between local government and the NHS.

Further reform of England’s system of local government is also made more challenging by the introduction of flawed geographies like the East Midlands Deal. A case-by-case approach to devolution through deals is appropriate when there is a consistent set of principles underpinning the deals. But if those principles no longer apply, then all that is introduced is more variation and complexity, damaging accountability and governance.

Nottingham and Derbyshire should get separate devolution deals

Delivering devolution to Nottingham and Derby and their hinterlands will always be complicated due to their geography. The two cities are close to each other, but in the south, a considerable distance from the centre of their historic counties. The district councils in the north of the counties have strong links to Sheffield, and were part of the original plan for the Sheffield City Region.

Nevertheless, there are devolution options that do not require merging the two geographies together. The ideal approach, as set out in Centre for Cities’ report on Levelling Up Local Government in England, would be to establish unitaries for ‘Greater Nottingham’ and ‘Greater Derby’ out of the existing city councils and nearby districts, while the northern district councils of their shires would be established as separate unitaries, perhaps joining Sheffield’s metropolitan government.

Unfortunately, this ship has likely sailed, with the creation of the South Yorkshire Combined Authority and the framework for devolution set out in the Levelling Up White Paper.

However, there is another choice. The Government can and should replicate the approach it has just pursued in North Yorkshire and go for two separate mayors for Nottinghamshire and Derbyshire each with their respective urban areas. This would close the “doughnuts” posed by the cities’ unitary status separating them from their counties, while giving a decent economic geography, matching the boundaries proposed in the Redcliffe-Maud Report of 1969.

There are even choices available in how Government could do this. They could continue to use the new powers in the Levelling Up Bill to allow the county councils and the city unitaries to get on with devolution, leaving the district councils under the counties with a marginal role. Or the Government could copy its own approach in North Yorkshire, and roll up the county’s districts into a unitarized county council.

This tighter and more sensible geography would make it possible to at some point in the future to begin shifting economic powers – such as planning and highways – eventually up to the new mayoral tier where they belong.

It may be politically challenging, but if the Government really cares about levelling up, then there’s still time to do the right thing and cleave the D2N2 deal in two. Nottingham and Derby each deserve the powers, freedoms, and mayors that other English cities have already secured, but the current deal on the table won’t deliver this for the cities’ residents or their economies.