Yesterday we launched the fifth edition of our annual report, Cities Outlook 2012. Our economic snapshot on the state of the cities shows that, while the whole economy faces a difficult year, each city will face quite different economic opportunities and challenges. 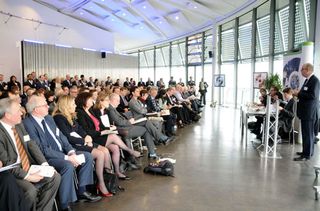 Our index suggests that some cities are better placed to grow, while others are more vulnerable to the difficulties of the year ahead. But we know from our work across the UK that all cities are working hard to help those most affected by the recession as well as to make the most of any economic opportunities.

And there is little doubt, as Greg Clark said at our event yesterday, that the battle for growth will be won or lost in our cities.

Greg openly acknowledged that city deals would be on the table for all cities and that the core cities were just a start – something the Centre welcomes. The next step is for Government to make good on its offer, and for cities to make the most of the opportunity to gain greater autonomy and powers as well as responsibilities.

Nick Forbes, Leader of Newcastle City Council, said that Newcastle was ready for the risks and responsibilities that come with devolved powers. He highlighted the importance of cities being clear they are “open for business”, while also dealing with the challenges of unemployment.

Sian Reid, Leader of Cambridge City Council spoke about the importance of striking a balance between short and longer term policy. Public sector job cuts, welfare reform and a weak economic climate taken together mean that city leaders could very easily get bogged down in short terms fixes. But economic growth requires cities to take short term actions that are on the path to a longer term vision of success.

Greg Clark recommended Cities Outlook as ideal bedside reading; I’d suggest it’s a good read at any time of day. I hope you do have a chance to read it, and please get in touch with your thoughts on the outlook for 2012 for your city and those around you.