But this argument doesn’t consider who is most affected by polluted air. When comparing the latest deprivation data to nitrogen dioxide background concentration data, the relationship is clear: the most polluted areas are also disproportionately poorer.

In UK cities, 16 per cent of people living in the most polluted areas also live in one of the top 10 per cent most deprived neighbourhoods, against 2 per cent who live in the least deprived areas.

Figure 1 below shows the average background concentration of NO2 compared against neighbourhoods ranked by deprivation. For all English cities in aggregate, pollution levels rise as neighbourhoods become more deprived (although interestingly this pattern doesn’t hold for more rural areas). 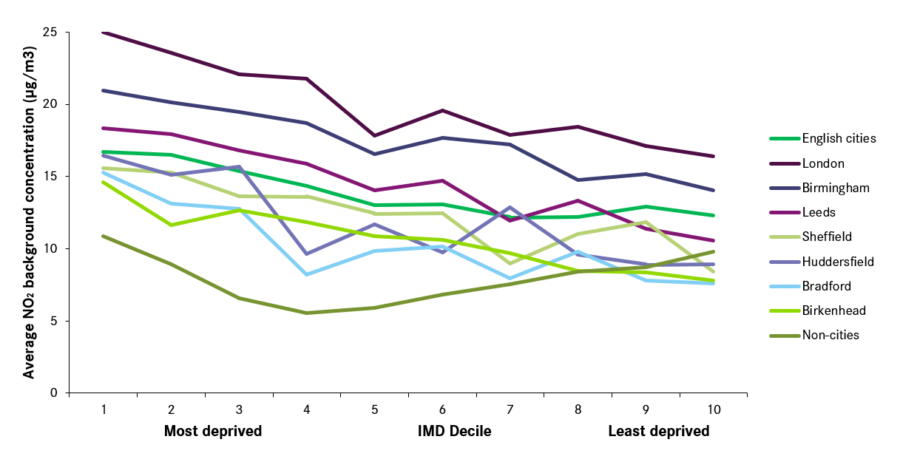 The graph also shows the cities in which the gap in pollution concentration between the most and the least deprived areas is the highest, which includes some of the UK’s largest urban areas.  In Sheffield, Leeds and Birmingham, there is a respective 46, 42 and 33 per cent difference in NO2 concentration between the poorest and the wealthiest areas – almost double the national urban average gap, at around 26 per cent.

One possible explanation for these inequalities in exposure to toxic air is that low-income people are more likely to live near busy roads. Our data on roadside pollution suggests that in London, 50 per cent of roads located in the most deprived areas are above legal limits, against 4 per cent in the least deprived. In a number of large cities (Birmingham, Manchester, Sheffield), none of the roads located in the least deprived areas are estimated to be breaching legal limits.

This has a knock-on impact on health. Poor quality air is known to cause health issues such as cardiovascular disease, lung cancer and asthma. Given the particularly poor quality of air in deprived areas, this is likely to contribute to the gap in health and life expectancy inequalities as well as economic ones between neighbourhoods.

The financial impact of policies such as clean air zones on poorer people is a valid concern. But it is not a justifiable reason for inaction. Mitigating policies such as scrappage schemes, which have been put in place in London, can deal with the former concern while still targeting an issue that disproportionately affects the poor.

As Cities Outlook showed, people are dying across the country as a result of the air that they breathe. Clean air zones are one of a number of policies that cities can use to help reduce this, with benefits for their poorer residents in particular.

Austerity
Austerity Devolution Future of cities Levelling up Productivity
What did the Budget tell us about levelling up?

Austerity
How can we support disadvantaged places after austerity?