Come to Stoke and we’ll pay your tuition fees – that’s the offer that the city council is making to maths teachers as part of a £1 million scheme to improve maths attainment in the city. It’s a very simple idea, which is aimed at directly tackling a major challenge that Stoke faces – two attributes which make this initiative something of a rarity in the world of urban policy.

The need to improve educational attainment in the city is clear. In 2014 Stoke was ranked 46th out of 59 UK cities for the number of pupils who gained 5 A*-C GCSEs including maths and English (this doesn’t include Scottish cities, which have a different qualification system). Our Learning Curve report showed that this poor GSCE performance is common amongst cities with weaker economies. 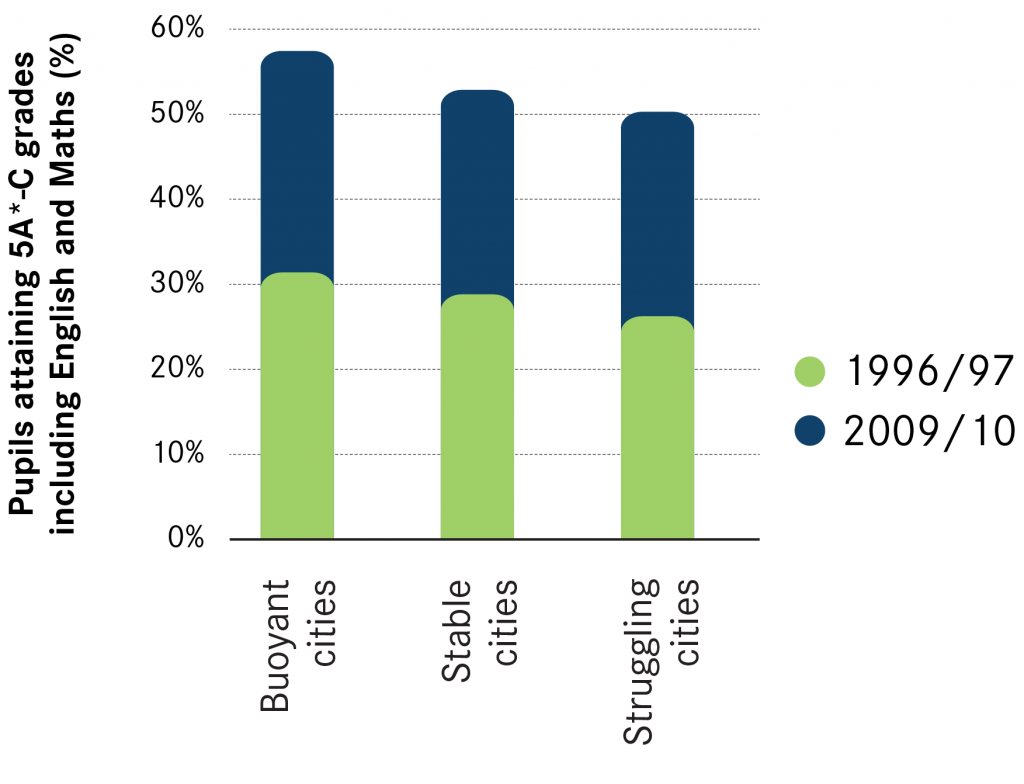 Source: Neighbourhood Statistics 2011, GCSE and Equivalent Results for Young People by Gender, referenced by Location of Educational Institution, 1996/97 and 2009/10 data; Department for Education. Cities in England only.

This pattern of poor school attainment is reflected in the skills of the workforce more generally. Cities that have a high number of graduates in their workforce tend to perform well on a range of economic indicators, while those which have a high proportion of residents with no formal qualifications tend to perform poorly. This is no great surprise – businesses that require high skilled workers are more likely to invest in cities where they can most easily recruit them.

But despite skills being at the heart of the challenges that UK cities face, policy innovation in this area is rare. Instead, more attention and resource is often committed to flashier initiatives, like creating cultural quarters or grand infrastructure projects – schemes which are unlikely to have much impact unless the more fundamental problems a city faces are tackled first, like skills gaps. That’s why Stoke’s plans – as a direct and innovative approach to deal with a key challenge the city faces – are so welcome.

When Greg Clark first offered City Deals, he said that he was handing cities a blank piece of paper to come to him with new ideas. It’s fair to say that the response wasn’t overwhelming, with grumbles coming out of Whitehall about cities simply recycling years-old ideas. Stoke’s new initiative is likely to have been closer to the kind of innovative thinking that Greg Clark was hoping to see.

Crucially the announcement also shows that, while devolution is very important, there are steps that cities can take to address the big economic challenges they face even if they don’t have a devolution deal. And while devolution will give cities more powers and tools to be innovative, we look forward to seeing more and more ideas coming from local government in the next couple of years, irrespective of whether they have struck a devolution deal or not.