The document tracks the UK’s progress against a set of indicators mapping social mobility from birth into adulthood. The findings reveal stark gaps at all life stages between the poorest and richest in society. Centre for Cities research reveals how these inequalities play out across the country: 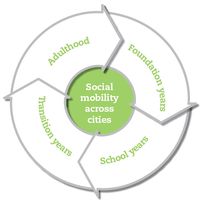 *Unless otherwise stated data is sourced from the Department for Education

The emphasis in the government’s strategy for social mobility is on ‘joined-up’ government with departments working together across policy areas. This makes a lot of sense given that individuals’ social mobility is influenced by multiple factors. Yet departmental silos have historically been difficult to break down. Cities can lead the way here, bringing together partners at the local level to tailor interventions around individuals, to maximise the impact of national initiatives and to minimise duplication.

The Centre for Cities will be exploring some of these issues at a roundtable with key Whitehall officials with leading voices from cities and business next month. If you are interested in attending or want to find out more, please contact Niamh Sands.